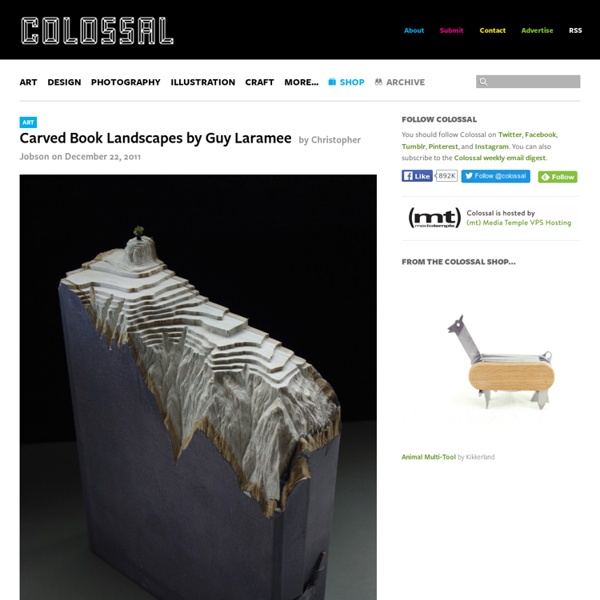 (click images for detail) For the better part of three decades multidisciplinary artist Guy Laramee has worked as a stage writer, director, composer, a fabricator of musical instruments, a singer, sculptor, painter and writer. Among his sculptural works are two incredible series of carved book landscapes and structures entitled Biblios and The Great Wall, where the dense pages of old books are excavated to reveal serene mountains, plateaus, and ancient structures. Of these works he says: So I carve landscapes out of books and I paint Romantic landscapes. Mountains of disused knowledge return to what they really are: mountains. Laramee’s next show will be in April of 2012 at the Galerie d’Art d’Outremont in Montreal.

MINDMAP Kunstmuseum St.Gallen November 10, 2012 - March 17, 2013 AWJGGRAUaDVVTAT 13th International Architecture Biennale, Venice, IT The Ambition of the Territory Belgian Pavilion with Team AWJGGRAUaDVVTAT Highly Detailed 3D Characters From Top 3D Artists - 53 Examples Most 3d artists’ portfolios have at least a beautiful woman character in it and it will be no surprise that you’ll find a lot of them here. Now besides the curious gazing at these 3d pictures, you must realize the sisyphean work that is being put in these characters, the long hours to create the render and then applying the high quality texture to get incredible the incredible results illustrated below. Rage Captain Jack Sparrow Transient Princess Alien vs Predator Chess

Miniature Food Artworks by Shay Aaron Shay Aaron is a brilliant artist from Israel who makes the most astonishing miniature food jewelry. These foodstuffs look so beautiful that we would desire to eat them. Actually, there’s a whole market out there for miniature food. Not actual stuff you can eat, but beautifully hand made designs of steaks, burgers, pies, vegetables, eggs and pretty much food artworks you can think of.

22 Incredible Photos of Faraway Places Thailand Chances are you already know Steve McCurry as the man who took one of the most iconic photos of our time. It was of a 12-year-old Afghan refugee girl who's piercing green eyes told us her harrowing story. Illustrator Rob Dobi Thinks Your Scene Sucks! Jun 19, 2011 / Category : Misc / 22 Comments We are all victim to the atrocities of today's many scenes and subscenes. Whether you choose to accept it or not, this reality affects us all in one way or another. We all deal with it in different ways, some keep themselves locked up in isolation, holding onto the hope that the scene won't penetrate their stronghold, others simply give in and take on a life of scenesterism tragic. It's got to the point where you need to know what signs to look out for, where not to be at the wrong time, and most importantly, to know your scenesters. YourSceneSucks helps you define which totally sucky scene you belong to: Apple Store Indie, maybe Hipster Jesus?

Sketchbook Secrets: 50 Beautiful Sketchbook Scans The sketchbook is—to borrow a term from the new millenniums’ popular discourse—an artist’s BFF. It’s a diary for the visually inclined—a place where artists can most comfortably explore their personal thoughts, work out their visual needs, practice, maintain a visual history, and hopefully create the unpolished work that will eventually lead to amazing work for the world to see. But, sometimes, when we’re lucky, we get to see the process. Below are 50 beautiful sketchbook scans from 35 talented artists. Allen Sutton Mattias Adolfsson Artist Book Series + Daily Art & Design Blog I couldn’t help but direct everyone to fellow public art loving blog Street Art Utopia as they have compiled a pretty decent list of the best street art of 2011. If you are just getting into the wonderful world of pasting, spraying or making the streets a more creative place, this list is a great place to start (short of Wall and Piece). One of the best things about this genre is it’s diversity – you can decided what you find gimmicky/twee or meaningful and awe-inspiring. Street art has always been the public’s voice, and the art world has yielded success to those with great ideas and a call for change.

Barbara Licha Polish-born artist Barbara Licha now lives and works in Sydney, Australia. Though she also works in paint and other forms of mixed media, her tangled wire sculptures of figures in various poses and states of suspension really caught my eye. Via her website: Polish born artist Barbara Licha’s recent sculptures explore the physical and emotional space of our contemporary urban environment. Here is a world where human emotion meets the exaggeration of our imaginations, the human condition magnified by dreams that linger and our memory of the past.

Captured: The Ruins of Detroit Posted Feb 07, 2011 Share This Gallery inShare850 Up and down Detroit’s streets, buildings stand abandoned and in ruin. French photographers Yves Marchand and Romain Meffre set out to document the decline of an American city. Their book “The Ruins of Detroit“, a document of decaying buildings frozen in time, was published in December 2010. Designers Spin Spidey-Worthy Webs From Packing Tape Packing tape has gotten MacGyver out of many a jam, but he never managed to make an entire home out of the stuff. So he could probably learn something from Viennese/Croatian design collective For Use/Numen. The team uses nothing but packing tape to create huge, self-supporting cocoons that visitors could climb inside and explore.

Sweet Station Zemer Peled Peled was born and raised in a Kibbutz in the northern part of Israel. After completing a BA (Hons) at the Bezalel Academy of Art and Design in Jerusalem she graduated with an MA (Hons) from the Royal College of Art. woman takes lion for a walk photo Random photo Submit your photo Stumble Thru Kyle Bean Brighton-based designer Kyle Bean has been busier than us and he updated his portfolio to prove it with a slew of really fun work including these meticulously constructed matchstick insects (photos by Owen Silverwood). I also really enjoyed the window displays he did for Selfridges. Previously. (via notcot)