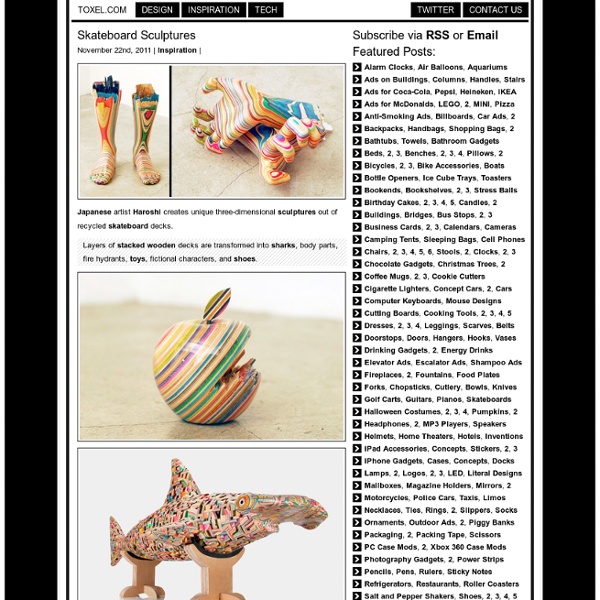 Creative Scan-and-Draw Color-Changing Pen Design Any artist or designer who works with color knows that the best inspiration and perfect coloration can often be found in real-life objects all around us. What if you could take your trusty drawing pen and simply scan any color you want and then turn around and draw with it? This innovative pen design by Jin Sun Park allows you to do just that. Fascinating Lamps by Calabarte Calabarte is the pseudonym of a Polish artist named Przemek Krawczynski, whose art takes on a peculiar but incredibly beautiful form: cool lamps. The name itself is a portmanteau of two words – art (obviously), and calabash, the fruit that carries his imagination. The calabash is a bottle gourd originating in India, although Calabarte gets his supply from Senegal.

Great Resume Designs that Catch Attention-and Got People Hired - StumbleUpon Inspiration June 21, 2011 When applying for a job, you have no choice but to do your best to outshine competition. Even before winning an interview, your qualifications (or in some instance, your character) are already judged by the resume you’ve submitted. It is then important to make your resume or CV as honest, concise, and striking as possible. If you are looking forward to a creative position, you will be expected to come up with something grand and extra creative as well. Take a look at how other designers compose their creative resumes.

Thousands of Plastic Figures Hold Up the Floor One of the most exciting contemporary artists of our time, Korean Do Ho Suh, created this large sculptural installation that doesn't look like much until you come closer. Glass plates rest on thousands of multicolored miniature plastic figures who are crowded together with their heads and arms turned skyward. Together, they are holding the weight of the individual visitor who steps onto the floor.

Elaborated patterns on gourds: extraordinary lamps by Calabarte “Light is an inspiration and a discovery. You never know where it will appear. When it penetrates through thousands of holes of a spherical layer, it searches for the shortest way to the screen, on which it leaves its trace. This screen is our common world: walls, furniture, curtains. If I’m the architect of the shape and pattern of the lamp, an artisan who puts life in it, then the light is a surprise and amusement, an euphoria of luminescence, an illusion made real and which never bores, because it changes with every move of its source. My lamps are made from unique fruit which gourd is, through a process of manual perforation and framing.

Yarn Bombing / Guerrilla Crochet – A Collection More info. More info. More info. More Yarn Bombing and Guerrilla Crochet: 1) B-Arbeiten 2) Agata Olek 3) Yarnbombing 4) Stickkontakt Carved Book Landscapes by Guy Laramee (click images for detail) For the better part of three decades multidisciplinary artist Guy Laramee has worked as a stage writer, director, composer, a fabricator of musical instruments, a singer, sculptor, painter and writer. Among his sculptural works are two incredible series of carved book landscapes and structures entitled Biblios and The Great Wall, where the dense pages of old books are excavated to reveal serene mountains, plateaus, and ancient structures. Of these works he says: So I carve landscapes out of books and I paint Romantic landscapes.

Broken CDs Transformed Into Iridescent Animal Sculptures With most of our music now in a digital format, neatly contained on our mobile phones and iPods, many of us have no doubt got lots of old CDs stacked up in garages, waiting to become miniature frisbees or coffee coasters or museum relics from a bygone era. But rather than letting them lie there in their boxes, unloved and gathering dust, why not put them to good use by smashing them up and turning them into attractive animal sculptures? Artist Sean Avery has done exactly that and created a series of sculptures—from bears to peregrine falcons and even the Loch Ness monster—using the reflective splinters of what was once, possibly, a cherished music collection. It’s not the first time we’ve seen artworks created from dead (well, dead-ish) media.

Gadgets SOOOOooo…yes I know that is all grammatically incorrect and yes I am a TEACHER! AHHHhhhh! Anyways, usually most people don’t worry too much about grammar when we are communicating what we might say in person to someone else in writing on the internet, not a term paper. Stone fields by Novastructura This project has started from a search for a 3d-objects optimal packing algorithm over a surface, but evolved in something rather different. I love the work by Richard Long, the way he fills lonely landscapes with arcaic stones patterns. My version is a poor and lazy version of that eroic approach..

Hyper-Realistic Rubber: Tire Sculpture by Yong Ho Ji - Unfinished Man - StumbleUpon Whenever I take road trips, I often notice the hulking shreds of stripped semi tires laying around, and I’ve always thought two things: one, they look almost organic- like they’re actually the carcasses of some prehistoric animal that blundered its way onto the highway, and two- that that animal must have been damn ugly. But when I saw a tire sculpture by Yong Ho Ji the other day, I realized I was pretty wrong about the hideous part. He reassembles strips of old tires with resins and screws into gorgeous creatures with predatory stances and sinuous movement. We love our cars, so seeing tires re-purposed after their regular lifespan into perfect manly sculptures is totally bad ass.