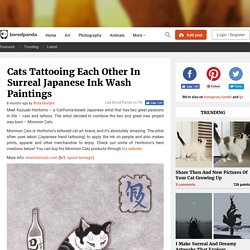 Afro-futuristic editorial draws inspiration from the space race and social change of the 1960s. Inspired by the 1960 collision between fashion, space exploration, and the social change of the time, the World Geometric ‘Space Age’ editorial aims to harness the free-spiritedness of the time and pay tribute to French fashion designer André Courrèges. 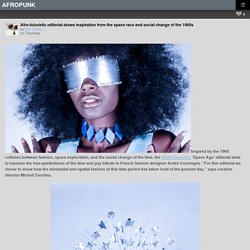 “For this editorial we chose to show how the minimalist and spatial fashion of this time period has taken hold of the present day,” says creative director Micheli Carolina. The Tinkering Studio. This Movie of Marble Being Quarried is Truly Mesmerizing. When Italian artist and filmmaker Yuri Ancarani set out to capture the carefully orchestrated process of extracting marble from a quarry in the Italian Alps, he had some pretty wonderful material to work with. 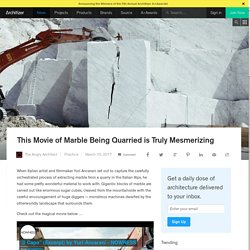 Gigantic blocks of marble are carved out like enormous sugar cubes, cleaved from the mountainside with the careful encouragement of huge diggers — monstrous machines dwarfed by the otherworldly landscape that surrounds them. Check out the magical movie below … Stunning Miniatures by Joshua Smith. The world of our future: Nature and Technology unites in AUJIK video works – Cube Breaker. Our vivid, contemporary reality constantly offers new visual materials with unexpected concepts. 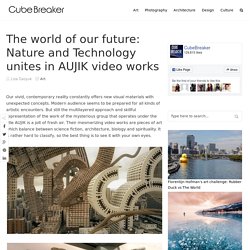 Modern audience seems to be prepared for all kinds of artistic encounters. But still the multilayered approach and skillful representation of the work of the mysterious group that operates under the title AUJIK is a jolt of fresh air. Their mesmerizing video works are pieces of art which balance between science fiction, architecture, biology and spirituality. It is rather hard to classify, so the best thing is to see it with your own eyes. Dmitry Rogozhkin. - -Google. Some ways to use it! by ColoringKaria - Drawing Technique.

5 BASIC RULES OF SHADING by creosfera - Drawing Technique. Performance Artist Stood Still For 6 Hours to Let People Do What They Wanted to Her Body. Mbas - -Google. Basquiat - -Google. Michelle Morin - -Google. __ DOMINIQUE APPIA __ The Art of Minimalism. Brick & Wonder is a curated platform of the highest-quality homes for sale worldwide. 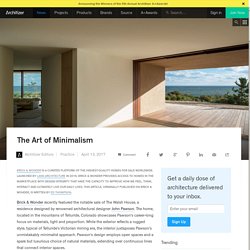 Launched by Lang Architecture in 2016, Brick & Wonder provides access to homes in the marketplace with design integrity that have the capacity to improve how we feel, think, interact and ultimately live our daily lives. This article, originally published on Brick & Wonder, is written by Ed Thompson. Brick & Wonder recently featured the notable sale of The Walsh House, a residence designed by renowned architectural designer John Pawson. Construction Techniques: 18 Intricate Examples of Traditional Japanese Wood Joinery.

We tend to think of knowledge in terms of progressive accumulation, with each succeeding generation having more information at its disposal than the one that came before it. 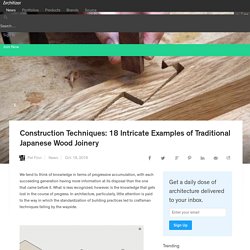 What is less recognized, however, is the knowledge that gets lost in the course of progress. In architecture, particularly, little attention is paid to the way in which the standardization of building practices led to craftsman techniques falling by the wayside. Nowhere is this more apparent than Japan, a nation with an architectural tradition like no other. Long before screws and metal fastenings became de rigueur, Japanese builders had mastered the art of wood joinery. Using techniques handed down in guilds and families for centuries, Japanese builders would fit wooden beams together without any external fasteners.

Epicstream. Frank Frazetta, the legendary comic book artist known for his works with Conan the Barbarian and the Molly Hatchet album cover, created some impressive fantasy illustrations that catapulted him to fame. 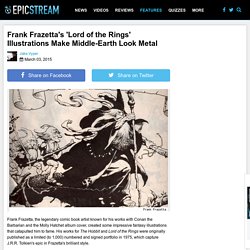 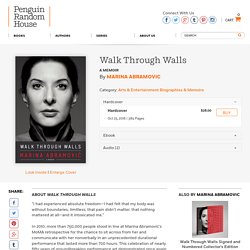 —Booklist, starred review “Enchanting and emotionally raw, Walk Through Walls is an honest, gripping, and profound look into the heart and brilliant mind of one of the quintessential artists of the postmodern era.” —Publishers Weekly, starred review “Marina has lived like an unstoppable force of nature, with the kind of power that leaves me feeling breathless and disquieted—while at the same time profoundly impressed, awed, and inspired. As I turn the pages of her book, I hear her voice in my head, as if she were actually narrating the words. Amazon. Carroll, L. and Burstein, M., et al., eds. Dalí, S.;: Alice’s Adventures in Wonderland (150th Anniversary Edition) (eBook and Hardcover). Commemorating the 150th anniversary of one of the most beloved classics of children’s literature, this illustrated edition presents Alice like you’ve never seen her before. 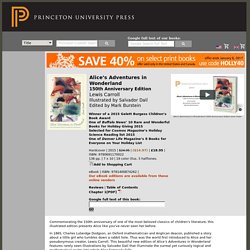 In 1865, Charles Lutwidge Dodgson, an Oxford mathematician and Anglican deacon, published a story about a little girl who tumbles down a rabbit hole. Thus was the world first introduced to Alice and her pseudonymous creator, Lewis Carroll. C'est dommage : Photo. Ammar khammash instrument - -Google. Artist Leaves Funny Signs Around City For People To Find (15+ Pics) 15+ Cartoonists Around The World Illustrate How They Feel About Trump Becoming President. It Took 125 Years To Notice Something Extraordinary In A Painting Millions Have Seen. Vincent Van Gogh died having sold just one painting during his lifetime. He committed suicide with little recognition of his life’s work, and we're only just beginning to realize what a true genius he really was.

His famous 1889 painting, "The Starry Night" — where light and clouds flow in turbulent swirls on the night sky, is something that everyone has seen, with his beautiful use of flowing light absolutely hypnotic. C'est dommage. Benjamin Marra’s ‘American Psycho’ Comics Now Available As Broadsheet Newspaper [Preview] One of the standout releases of last year’s Brooklyn Comics + Graphics Festival was a characteristically striking series of self-published zines from Benjamin Marra (The Incredibly Fantastic Adventures of Maureen Dowd) based on the filmed version of Bret Easton Ellis’ infamous novel, American Psycho.

Rendered in Marra’s distinctive high-contrast style, each image recreates a moment from director Mary Harron’s cult favorite film in such a way as to eclipse that movie’s sneering sexuality and ultraviolence and express something closer to the existential dread of Ellis’ original 1980s work about a Wall Street serial killer. Psstzine. Frank Gehry Teaches Design and Architecture. When does the class start? Frank's class is scheduled to begin Fall 2017. Students who pre-enroll will receive early access to the class. What does the enrollment fee include? Access to every lesson in the class A downloadable workbook with lesson recaps, takeaways, and assignments Membership in an active community of engaged students (upload your own work, or provide feedback on a peer's!) Access to instructor feedback and answers in Office Hours Class-specific tools to help you practice your craft You can see more information about what the class includes at masterclass.com/fg.

C'est dommage : Photo. AFU CHAN - ILLUSTRATION. שביל בצד 40: אלבומי האינדי הכי טובים של 2016. The AGUA. A totally new way to carry your camera! by Ohad Cohen. Marina Abramovic: 'The planet is dying. We have to be warriors' Let’s start with a quick quiz: what do Marina Abramović (Serbian performance artist) and Tony Abbott (Australian prime minister) have in common? Answer: they’ve both been filmed eating a raw onion. A whole one. In fact, Abramović ate three. “The first time, the light on video wasn’t so good. The second, sound was lousy. Udo Kier: Solace. For 50 years, whenever arthouse directors have been looking for a villain or a vampire, a deviant or a desperado, they dial U for Udo. This Fantastic Pencil Art Tutorial Shows How To Draw The Perfect Skull. Mitski / Puberty 2 out June 17 on Dead Oceans.