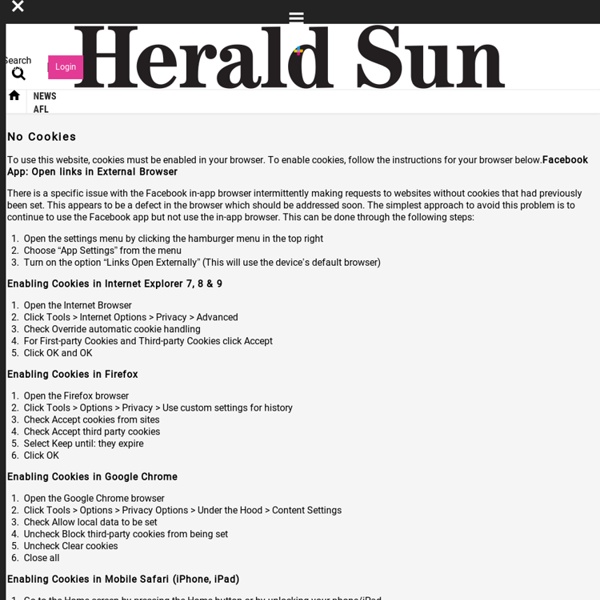 Writing Advice My eyes usually glaze over whenever I see somebody saying something as artsy as “go into yourself”. But this is Rilke. And it’s worth getting past that. You are looking outward, and that above all you should not do now. Assessment & Reporting — Eltham North Primary School The Reading Benchmarking Data is collected in mid-November each year. Our Reading Recovery Teacher completes the ‘running records’ for each student in Prep, Year 1 and Year 2 against the required Benchmark texts. (Having one highly-trained person to administer the assessments ensures consistency of results). Unit Leaders and class teachers receive a copy of their students’ results. This information is also communicated to the next year’s class teacher, so that they are aware of which students may require additional support.

Melbourne Airport confirms toxic PFAS chemical spread in water beyond site boundaries Updated about 5 hours agoThu 31 May 2018, 1:32am Melbourne Airport has confirmed contamination caused by toxic chemicals, historically used in firefighting foams at the site, has spread beyond the airport boundaries. In a statement to the ABC, airport spokesman Grant Smith said the Melbourne Airport Authority (MAA) was contacting a group of landholders to inform them of the contamination. The MAA will also ask residents and landholders whether they use the surface water flowing through local waterways on their properties. Mr Smith said the authority believed the health risk posed by the chemical contamination to landholders downstream of the site was low. "At some times of the year, some of our off-airport testing locations recorded per- and poly-fluoroalkyl substances (PFAS) levels in surface water above the current Australian Government guidelines," he said.

Top Worldwide 18 Mass UFO Sightings Fiery "Craft" Seen Over Texas -1957 8. This case is perhaps the most important mass UFO sighting and vehicle interference events in the United States. On the evening of November 2, 1957, Patrolman A. J. Darkness isn't what it used to be - and that's not good Los Angeles: Earth is losing its darkness. A new study using satellite data finds that artificially lit surfaces around the world are spreading and growing brighter, producing more light pollution at night. The findings, described in the journal Science Advances, track what researchers called a worrisome trend that has implications for the environment as well as human health. "This is concerning, of course, because we are convinced that artificial light is an environmental pollutant with ecological and evolutionary implications for many organisms - from bacteria to mammals, including us humans - and may reshape entire social ecological systems," Franz Holker of the Leibniz-Institute of Freshwater Ecology and Inland Fisheries, one of the study's authors, said in a briefing.

Karl Ove Knausgaard on Failure, Memory, and Writing 20 Pages a Day The fifth book in Karl Ove Knausgaard’s widely and obsessively loved My Struggle will be released next week, April 19th, from Archipelago Press. John Freeman caught up with the inimitable Knausgaard in Japan. John Freeman: Book five of My Struggle was written at speed and originally published five years ago. Karl Ove Knausgaard: Yeah JF: Now you’re eight or nine thousand miles from home, in Japan, recalling a time that was experienced at speed as well. So, I’m curious if you could talk at all about what it felt like when you were writing these books and you had reached number five.

Online publication for school educators Research has identified teacher feedback as a significant influence on student achievement in the classroom (Hattie, 2008). In an effort to maximise academic growth, teachers have been encouraged to provide more feedback to their students. However, not all feedback is equal. If one of the goals of education is to create lifelong learners, how can teachers utilise feedback to promote this outcome? Lifelong learners are intrinsically motivated to build on their existing knowledge. According to neuroscience-based theories of attention and learning, people are not passive recipients of information, but wired to test and predict where new information fits (Friston, 2010).

Non gluten-free food being sold in cafes, restaurants putting coeliacs' health at risk Updated about an hour agoMon 28 May 2018, 6:33am Almost 10 per cent of food sold as "gluten-free" at cafes and restaurants across Melbourne actually contained gluten, an undercover study has found. City of Melbourne health officers made surprise visits to 127 food businesses across the city, taking 158 food samples for testing. The results, published in the Medical Journal of Australia, found one in 11 samples contained or were contaminated with gluten. The foods included common menu items such as burgers, risottos and banana bread. UFOs, Aliens and Abductions Survey - Syracuse New Times 3 Shares Share Tweet Email In the middle of July 2017, 20th Century Fox Home Entertainment commissioned a national survey conducted by Toluna regarding UFOs, aliens and abductions.

Discounting on Sydney properties at highest level in years, with price drops biggest on the lower north shore In a bid to secure a sale in a cooling market, Sydney homeowners are discounting their properties at their highest level in five years. Across the city, the average discount vendors accept on originally advertised house prices reached 6 per cent over the latest quarter – the largest markdown in prices since April 2013. The average discount accepted for Sydney units, now at 5.5 per cent, is also at its highest rate in five years. The average discount accepted for a house on the lower north shore has reached 6 per cent, while for apartments it’s at 5.5 per cent.

50 Awesome Websites to Submit Your Writing To So, you’ve successfully managed to avoid your social commitments to sit down and write something. After combing through it to check the grammar and that there isn’t a trail of letters from when you fell asleep on your keyboard, what’s the next step? You need to find somewhere to submit your writing online. The online writing community is bigger and better than ever before; one Google search later and you could find your new literary home. However, it might be a case of trial and error with some submission guidelines being stricter than others or your style of writing not quite matching the publication’s. Luckily, we’ve trawled the web for you, bringing you fifty awesome websites that will be happy to receive your writing submissions and potentially even publish them.

How to engage primary students with STEM in the classroom - Ian Fairhurst - ABC Splash - On Wednesday 24 May at 4 pm (AEST) Splash will host a live chat with ICT integrator Ian Fairhurst. He will talk about the importance of STEM and will answer the questions you post during the event. In this article, Ian shares some of his ideas and classroom successes. Identifying and maximising student passion and creativity, and facilitating real world skills in learning activities is essential when teaching Science, Technology, Engineering and Maths (STEM) to primary students. The focus has shifted away from lessons focused around learning “content” to a stronger emphasis on learning and applying scientific skills, design thinking, and digital and design technology production skills. Delivering STEM through thematic learning activities provides a much more diverse range of ways for students to engage.

Big Freeze across Melbourne, before sunshine at the MCG for the Queen’s Birthday clash IT’S BEEN another chilly morning around Melbourne with the mercury plunging to almost zero in parts of the city. The CBD got down to a low of 5C just before 6am and Moorabbin dipped to 1C, according to the Bureau of Meteorology. But those heading to the MCG for the Big Freeze should be able to enjoy sunshine, while AFL coaches take a dip for motor neurone disease. Bureau of Meteorology senior forecaster Richard Carlyon said it would be sunny but rain was on the cards. “There will be a period of sunshine and a top of 17 degrees,” he said.