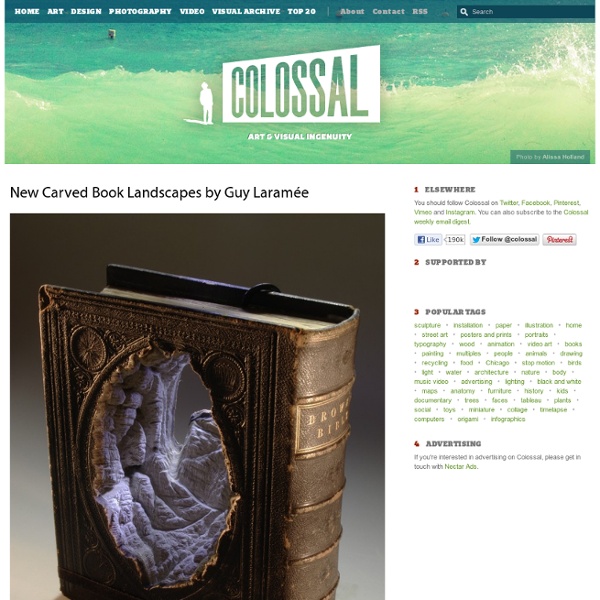 Artist Guy Laramee (previously) has recently completed a number of new sculptural works where he transforms thick tomes into incredible topographical features including mountains, caves, volcanoes, and even water. Many of the works are part of a new project titled Guan Yin, a series of work dedicated to the forces that enable individuals to endure grief and pain, or in his words “the mysterious forces thanks to which we can traverse ordeals.” If you happen to be near Quebec, a number of Laramee’s works are currently on view at Expression gallery in Saint-Hyacinthe through August 12. Update: You can also see a number of works by Laramée at Foster/White Gallery in Seattle.

Dirt is Good: 18-ton Sand Sculpture Backdrops by JOOheng Tan Every once in a while, advertising is amazing. World champion sand sculptor JOOheng Tan was recently asked by ad agency Lowe in Singapore to help create these impressive backdrops for an OMO washing detergent ad campaign. In an age when something like this could have been created digitally, they asked Tan to physically build three 18-ton sand sculptures to be used as backdrops in ads encouraging kids to get dirty. I recommend clicking through to see the pieces above in full size as the details are somewhat lost when scaled down. Also, the video is pretty phenomenal as it shows the creation and behind-the-scenes execution of each photoshoot.

Sean E. Avery – sculptures from broken CDs | Tribe House - A Culture of Collective Creativity Sean E. Avery – sculptures from broken CDs Tags: Art, artist, Austrailian, Scultpture, Sean Avery, Sean E. Posted : April 12th, 2012 by Nico Boesten Sean E Avery brings recycling to a whole new level. “I blend many different man made materials together to make them appear strangely organic, with a distinct sense of movement. These sculptures were too fascinating not to share. He graciously shot over a few of these images to place into our site and for that, we tip our hat to you Mr. Sean E. Upside-Down Kingdom Live! Wednesday May 28th 2014 Upside-Down Kingdom Live! TribeHouse compilation to benefit the Homeless InnCluded a music compilation to benefit those without a home. Tribehouse has put together a fine music compilation to benefit “Inn From The Cold” homeless shelter in Kelowna BC. The project is called InnCluded and… Night at the Inn – Photo diary On Friday October 18th 2013 Tribehouse collaborated with Inn from the cold to host a very special evening of the arts at St…

Sets for a Film I’ll Never Make: The Unbelievably Intricate Cardboard Sculptures of Daniel Agdag If you ask Melbourne-based artist Daniel Agdag what he does, he’ll tell you that he makes things out of cardboard. However this statement hardly captures the absurd complexity and detail of his boxboard and PVA glue sculptures that push the limits of the medium. Agdag is an award-winning creator of stop-motion films and this new series of work, Sets for a Film I’ll Never Make, feature a number of his structural experiments which he refers to simply as “sketching with cardboard”. Miraculously, each work is created without detailed plans or drawings and are almost wholly improvised as he works. You can see these latest sculptures at Off the Kerb Gallery starting October 26, 2012 in Melbourne’s inner north suburb of Collingwood.

Children’s Book Characters Arm Themselves for the Looming Fairytale Apocalypse As if loose pages from an old Disney script were accidentally left on the set of Terminator 3, these children’s book and cartoon characters including Whinnie the Pooh, Piglet, Daffy Duck and others have clearly armed themselves for the looming fairytale apocalypse. These welded stainless steel plate sculptures are by Korean artist So Hyun Woo, many of which are from his July exhibition at Song Eun Art Space aptly titled Cruel Fairy Tales 3. My hunch is that among regular readers of Colossal, for all the people who find these unbelievably wrong or plain weird, there will be an equal sized group who finds them juuuuust right.

The Jealous Curator Ancient art meets the mean streets of Chicago… well, the potholes anyway. Artist/designer Jim Bachor and I are talking about his gorgeous mosaic work, his 85 year old lookout, the fact that people are truly awesome, and me possibly dressing up as Jim for Halloween. You can listen right up there under that glass ‘n marble ice cream sandwich, or you can subscribe on iTunes. First up, “THIS IS NOT A POTHOLE anymore”… No, it isn’t! Wow. So. Ah, yes, art born from necessity. He said that he was a little bit scared of getting in trouble for the pothole. Beautiful. Speaking of beautiful – good friends are beautiful. … Jim studied the mosaic arts for months in Italy. “Me? Ok, up next we really got into the whole pothole thing. … and ice cream … YES! Now, Finland is certainly not the only place he’s filled a pothole or two. Love. Mmmm… insanely detailed glass and marble Cocoa Puffs! This is the piece he was talking about, from his latest series titled “Fake”, with the tiny plane in the top corner.

Hung Out to Dry Here’s a fun installation photographed last year from a 2011 international arts festival in Munster, Germany called Flurstücke 011. The piece was part of a performance/spectacle by a group called Generik Vapeur. Photo by Ingeborg. Comic Books Did you spend a couple of years of your life agreeing or disagreeing with Archie's dilemma over Veronica or Betty? Or did you want a pet like Garfield? Comic books are a relief for anyone craving for light-hearted comedy and they have become a major part of our lives. Let us see how. 11 Great Gift Ideas for Comic Book Lovers The world of comic books is sometimes beyond the realms of understanding of us mere mortals. Jungle Book Characters The Jungle Book is one of the most famous children's fiction book of all time. Best Comic Books of All Time The name says it all, comic books are humorous and can lift your mood within no time. Comic Book Story Ideas Creating a comic book is a very expressive art form that stimulates your imagination like no other. Most Loved Comic Characters With a large number of comic characters in the world of comics, there are a few who happen to be the most loved comic characters. How to Grade Comic Books By Condition How to Make a Comic Book How to Write a Comic Book

Organic Sculptures Sanded from Hundreds of Pencils by Jessica Drenk South Carolina-based artist Jessica Drenk was born and raised in Montana where she developed an understanding and appreciation of the natural world that has since deeply influenced the course of her artistic career. Her installations and sculptures often imitate organic shapes, patterns, and textures even when using a medium that is often manufactured by human hands. Drenk’s most recent sculptures are a series called Implements, each of which begins with a mass of standard No. 2 pencils that have been tightly glued together. Using an electric sander she then molds the piece into a form that seems more likely to have originated in a dark cave or deep within the ocean than from a school desk. Of her work she says: By transforming familiar objects into nature-inspired forms and patterns, I examine how we classify the world around us.

AMAZING MOON The Moon is the only natural satellite of the Earth, and the fifth largest satellite in the Solar System. It is the largest natural satellite of a planet in the Solar System relative to the size of its primary, having a quarter the diameter of Earth but only 1⁄81 its mass.[e] The Moon is the second densest satellite after Io, a satellite of Jupiter. It is in synchronous rotation with Earth, always showing the same face with its near side marked by dark volcanic maria that fill between the bright ancient crustal highlands and the prominent impact craters. The Moon is the brightest object in the sky after the Sun, although its surface is actually very dark, with a reflectance similar to that of coal. Its prominence in the sky and its regular cycle of phases have, since ancient times, made the Moon an important cultural influence on language, calendars, art and mythology.

knittyBlog | Melting Ice Cream Truck by the Glue Society As a kid, the summertime tragedy of dropping newly scooped ice cream on the sweltering hot ground is comparable to few other horrors, except maybe this sculpture by the Glue Society. The melting ice cream truck is a sculpture titled Hot With The Chance of Late Storm that was unveiled at the 2006 Sculpture by the Sea in Sydney. Quick, somebody get a giant spoon. (via ian brooks)