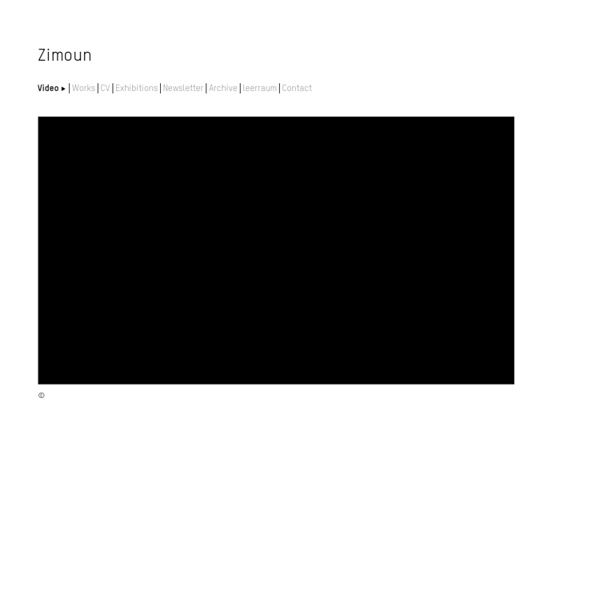 Work × Sosolimited Transformative Mobile Artwork A mobile, open source artwork that transforms your selfie into an undulating three dimensional landscape of color in real time. Watch as the fabric of selfie spacetime is deconstructed before your eyes. Shanghai Biennale Installation A television plays the soap opera channel as a projection behind it transforms the live signal & closed captioned transcript into a three dimensional topography of colors, oscillating forms, and linguistic computations. 82 Clever and Creative Fred & Friends Products I'm sure you've come across Fred & Friend products before at your local indie store and might not have even known it. Last weekend I was cruising around town and stopped at an indie store only to find one whole corner of the place dedicated to Fred & Friend products. It was heavenly. I stood there for probably more than a half hour laughing and checking out all their cool stuff. A lot of creativity goes into the making of these products, and I think part of that cleverness is shown in the name of the product and the slogan.

This doesnt exist Donate Login Remember Me Sculptor Creates “The Great Wall of Vagina” UK-based sculptor Jamie McCartney made what he calls “The Great Wall of Vagina”, exhibited at the Brighton Festival Fringe. The entire sculpture consists of 400 plaster casts of vaginas with whom the artist personally had sex with. If that doesn’t spell “classy,” I don’t know what does. The artist explains: Vulvas and labia are as different as a faces and many people, particularly women, donâ€™t seem to know thatâ€¦ showing the variety of shapes is endlessly fascinating, empowering and comforting. For many women their genitals are a source of shame rather than pride and this piece seeks to redress the balance, showing that everyone is different and everyone is normal.

Rob Meek Meek FM is a collaboration between Meek Design and Frank Müller from United States Of Design. Meek FM is an interpretation of type as sound. Using bespoke software and the MEEK typographic synthesizer, the musician/designer develops sounds and typographic visuals in parallel. Meek FM was premiered as an interactive installation at the Typo2007 in Berlin, where the Meek FM team also performed live. Meek FM: At Letters are our Friends Meek FM consists of a physical controller and some software. Carved Book Landscapes by Guy Laramee (click images for detail) For the better part of three decades multidisciplinary artist Guy Laramee has worked as a stage writer, director, composer, a fabricator of musical instruments, a singer, sculptor, painter and writer. Among his sculptural works are two incredible series of carved book landscapes and structures entitled Biblios and The Great Wall, where the dense pages of old books are excavated to reveal serene mountains, plateaus, and ancient structures. Of these works he says: So I carve landscapes out of books and I paint Romantic landscapes.

Rotational illusion Rotating illusion "Rotating snakes" Circular snakes appear to rotate 'spontaneously'. Copyright A.Kitaoka 2003 (September 2, 2003) Explanation (PDF file) Gernreich alphabet Gernreich is an alternative alphabet for English invented by Michael Carnright when he was 14. The letters are like building blocks which are connected together to make words, which in turn can be connected together to make sentences. Micheael usually uses graph paper to write this alphabet. Notable features The letters with the largest span from point to point are used for the most common letters in English. The least used letters are represented by the smallest symbols. ishac Bertran Organic, Analog & Digital | Lab | Blog | About Selected personal work. Thousands of Plastic Figures Hold Up the Floor One of the most exciting contemporary artists of our time, Korean Do Ho Suh, created this large sculptural installation that doesn't look like much until you come closer. Glass plates rest on thousands of multicolored miniature plastic figures who are crowded together with their heads and arms turned skyward. Together, they are holding the weight of the individual visitor who steps onto the floor.

A Stunning, Intricate Maze Made From 2,200 Pounds of Salt Motoi Yamamoto has to be the most patient man in the world. A Japanese artist, Yamamoto uses salt to create monumental floor paintings, each so absurdly detailed, it makes A Sunday Afternoon on the Island of La Grande Jatte look like child's play. He calls them, fittingly, his Labyrinths.

Pleix Filter: installation view all News Film Commercial Print Installation Sunken bridge-Agency Art Animation A series of moats and fortresses were built over the West Brabant Water Line region of the Netherlands during the 17th century in order to provide protection from invasion by France and Spain. Fort de Roovere was surrounded with a shallow moat that was too deep to march across, and too shallow for boats. In turn the earthen fort had remained protected –until now. The bridge and its components have been made from sustainable hardwood that has also been treated with a non-toxic coating protecting it from fungal decay and increasing its durability… Just a little wave and you won’t be so amazed anymore! Very nice and beautiful concept still. Via – Inhabitat I am Borg – The World’s First Recognized Cyborg Neil Harbisson is used to people giving him puzzled sideways looks, especially at airports where his appearance has prompted officials to question him closely on more than one occasion. He can answer their questions quite blithely however. He is a cyborg – and that’s official. Harbisson’s story is more than a little interesting. Born in 1982 to a British father and a Spanish mother he was diagnosed in his childhood with achromatopsia. This is a syndrome that has links to five separate diseases but for Harbisson it meant that he could only see the world in black and white.