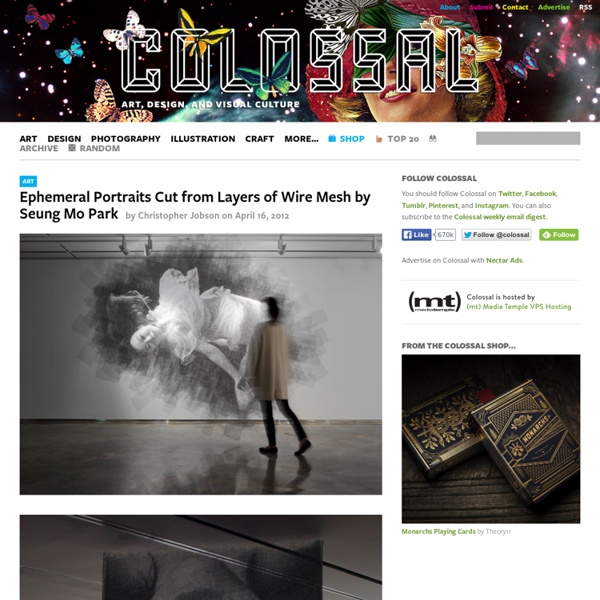 Using a process that could be the new definition of meticulous, Korean sculptor Seung Mo Park creates giant ephemeral portraits by cutting layer after layer of wire mesh. Each work begins with a photograph which is superimposed over layers of wire with a projector, then using a subtractive technique Park slowly snips away areas of mesh. Each piece is several inches thick as each plane that forms the final image is spaced a few finger widths apart, giving the portraits a certain depth and dimensionality that’s hard to convey in a photograph, but this video on YouTube shows it pretty well. Park just exhibited this month at Blank Space Gallery in New York as part of his latest series Maya (meaning “illusion” in Sanskrit). You can see much more at West Collects. (art news, west collects, lavinia tribiani)

Disturbing (But Amazing) Pictures Expose The Absurdities Of Modern Culture *Warning: Graphic Images* One of my first thoughts after coming across these illustrations was, “How have I never seen this artist’s work before?”, because they are freaking amazing. Too few artists today have the courage to tackle important social commentaries with their art. But Spanish artist Luis Quiles has undoubtedly broken this mold with his series of illustrations that depict some relevant and unfortunate realities of our world today. Bottom Feeders: Ceramic Objects Encrusted with Marine Life by Mary O’Malley As if lifted from the wreckage of the Titanic, ceramic artist Mary O’Malley creates sculptural porcelain teapots, cups, and vases adorned with barnacles, tentacles, and other living sea creatures (she refers to them as “porcelain crustaceans”). Many original works from this series titled ‘Bottom Feeders’ are available over on Etsy. (via laughing squid)

Photoshop? NO. These Are Real Animals Katerina Plotnikova did something extremely amazing! She used no photoshop! All poses and animals are real! Personal Finance News & Advice To be perfectly upfront, what we’re about to show you is not something we endorse. The legality of writing on U.S. currency isn’t clear-cut: according to Title 18 of the United States Code, Section 333 (18 U.S.C. §333), “whoever mutilates, cuts, defaces, disfigures, or perforates, or unites or cements together, or does any other thing to any bank bill… with intent to render such bank bill, draft, note, or other evidence of debt unfit to be reissued, shall be fined under this title or imprisoned not more than six months, or both.” The key term here is “intent to render” that bill to be reissued, which implies that it has to be taken out of circulation, and the bills we have included in this slideshow may very well be still exchanging hands.

America's Forgotten Pin-Up Girl Word of the day: Zaftig /zäftig/ adjective: (of a woman) Having a full, rounded figure; plump. Meet Hilda, the creation of illustrator Duane Bryers and pin-up art’s best kept secret. Voluptuous in all the right places, a little clumsy but not at all shy about her figure, Hilda was one of the only atypical plus-sized pin-up queens to grace the pages of American calendars from the 1950s up until the early 1980s, and achieved moderate notoriety in the 1960s. “She’s a creation out of my head. I had various models over the years, but some of my best Hilda paintings I’ve ever done were done without a model,” veteran artist Duane told the online pin-up gallery Toil, Anamorphic Sculptures London-based artist Jonty Hurwitz creates ‘Anamorphic Sculptures’ which only reveal themselves once facing a reflective cylinder. Hurwitz took an engineering degree in Johannesburg where he discovered the fine line between art and science. He has lived in England for many years, working in the online industry though he quietly levitated into the world of art inspired by a need to make ‘something real’. Hurwitz discovered that he could use science as an artistic paintbrush.

30 Challenges for 30 Days Did you know that it takes 30 days to form a new habit? The first few days are similar as to how you would imagine the birth of a new river. Full of enthusiasm it gushes forth, only to be met by strong obstacles. The path is not clear yet, and your surroundings don’t agree. Swirling, Psychedelic Self-Portraits by Nikos Gyftakis Greek artist Nikos Gyftakis created this wonderful series of swirling self-portraits between 2004-2005. The works are made with oil pastels on canvas and are actually quite large, with a few of the pieces taller than 5′ (1.5m). You can see many more from this series and more of his recent work in his work gallery.

The 14 Stunning Photographs Of Couples In Love Braden Summers: Why is it that the quality of commercial imagery of the gay community is less beautiful, than the fantastical illustration we see of romance for everyone else in popular culture and mass media. I'd like you to be a part of a conversation that challenges why that is on a global scale. I'm Braden Summers, I’m a photographer based in New York City. I particularly love creating portraits and celebrating romantic moments. Last year I found myself living a dream. I was in love, I was in Paris, and I was inspired by the old world architecture and fascinating people and their classic French style.

10 Cool Painting Hacks - Painters of LouisvillePainters of Louisville After surfing the web I came across some really creative ideas for painting in your house: walls, floors, furniture, etc. I live under the mentality that if you don’t like something change it, and if you can’t afford it, make it. These clever hacks definitely fall under those categories.

World's Most Beautiful Trees Photography The Portland Japanese Garden is a traditional Japanese garden occupying 5.5 acres (22,000 m²), located within Washington Park in the west hills of Portland, Oregon, USA. Photo by: unknown Huge 750 years old sequoia tree, California. Photo by: Michael Nichols Kiss under a cherry blossom tree. Immortal Game Game animation General description[edit] Checkmate of the Immortal Game Adolf Anderssen was one of the strongest players of his time, and many consider him to have been the world's strongest player after his victory in the London 1851 chess tournament.

carnovsky RGB Color est e pluribus unus RGB is a work about the exploration of the “surface’s deepness”. RGB designs create surfaces that mutate and interact with different chromatic stimulus. Carnovsky's RGB is an ongoing project that experiments with the interaction between printed and light colours. The resulting images are unexpected and disorienting. frankie exclusive diy: dip-dyed shoes Winter isn't quite here, but already folks are starting to revert back to their dreary cold weather wardrobes. Ugh. How boring!