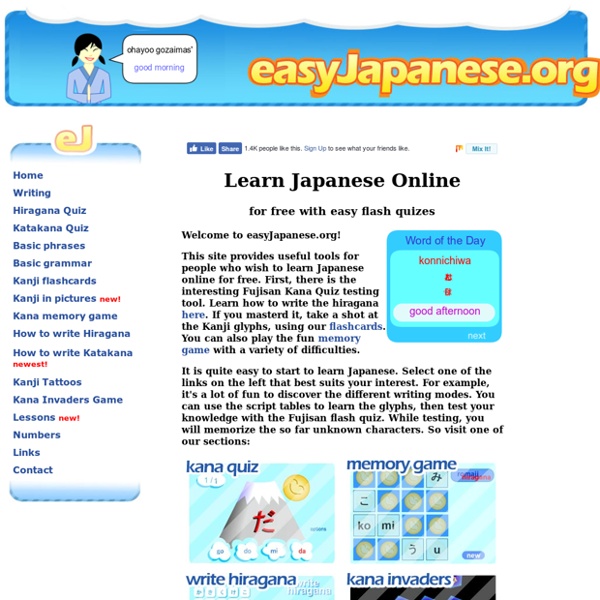 for free with easy flash quizes Welcome to easyJapanese.org! This site provides useful tools for people who wish to learn Japanese online for free. First, there is the interesting Fujisan Kana Quiz testing tool. Learn how to write the hiragana here. If you masterd it, take a shot at the Kanji glyphs, using our flashcards.

漢字大好き - I Love Kanji Learn → Beginner Brace yourself, folks, for this lesson will introduce to you your first set of Kanji evah. The chances are that you are going to be very confused, but we'll take it slowly and things will be explained thoroughly. I want to stress this right now, do not try to memorize the on'yomi and kun'yomi. They are merely given for reference.

Manga University Learn Japanese Learning Japanese is easy with a little help from Manga University! If you're a fan of manga and anime, you probably have had this thought at least once: "I wonder if I can learn Japanese?" And why wouldn't you? Japanese comics and cartoons are taking the world by storm, and you want to learn everything you can about the language and culture of the cool place they come from. So you pick up a textbook at your favorite store but quickly lose interest; while the book seems to be informative, it's certainly no fun compared with a good manga.

Family tree of the Greek gods Key: The essential Olympians' names are given in bold font. See also List of Greek mythological figures Notes External links Media related to Family trees of Greek mythology at Wikimedia Commons Japanese With Manga A couple of weeks ago I posted how reading manga can be good for your Japanese , but I only touched on learning to read from scratch. Thankfully, one of my friends natuskigirl (Lynn) followed through with her comment on that post , and put together two videos on how to start learning Japanese with manga. The videos are excellent in outlining the steps you need to take to start using manga as a learning aide, so I thought I might feature them here and add a few of my own ideas. Lynn started learning Japanese from manga when she was 13 years old, and has posted lots of cool manga collecting videos on her YouTube channel " tokirocket ".

Careful, writers! 10 common words with opposite meanings The English language is full of words with uncommon properties. There are backronyms, metaplasms, and neologisms. My favorite words of unusual properties are contranyms, or words that are spelled the same, but have two opposite meanings. These words are also known as Janus words, named after the Roman god of gates and doorways and of beginnings and endings. Anime Movie Guide Movie Count: 63 Do you have feedback, questions, movie suggestions or review copy offers? You can contact us at contact@animemovieguide.com

100 Websites You Should Know and Use Entertainment Meet David Peterson, who developed Dothraki for Game of Thrones There are seven different words in Dothraki for striking another person with a sword. Among them: “hliziﬁkh,” a wild but powerful strike; “hrakkarikh,”a quick and accurate strike; and “gezrikh,” a fake-out or decoy strike. But you won’t find these words in George R. How To Use Evernote To Study Japanese (Or Any Other Language) One application which I’ve used for a long time is Evernote, though I’ve mostly been collecting and organizing recipes… until now. Just today, as I was scrolling through the Asahi Shinbun, I had an epiphany. I should be saving articles, sentences, vocabulary, and what-have-you in Evernote so that I can easily search for them later if I ever need to come up with examples on how grammar, vocab, etc., is used in a sentence. Doing this with Japanese blogs would be splendid too. More importantly, I’m going to deconstruct how to use Evernote for language learning (specifically Japanese in this article). It’s a very powerful tool with a lot of potential – I’m sure you’ll even find some interesting uses that I won’t even think of too.