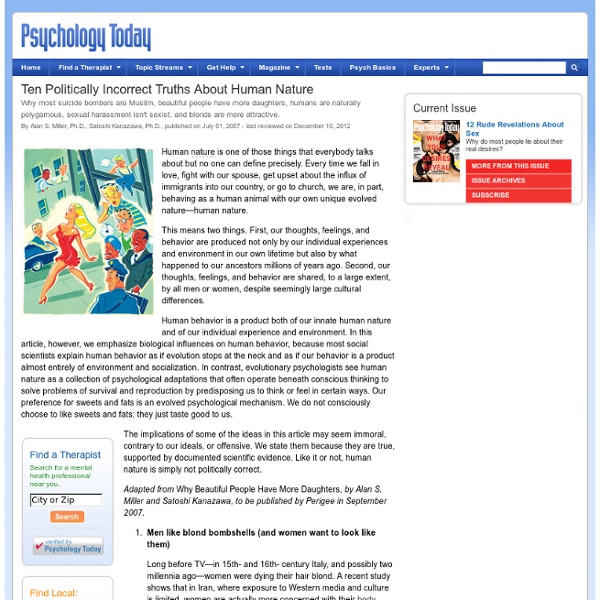 Human nature is one of those things that everybody talks about but no one can define precisely. Every time we fall in love, fight with our spouse, get upset about the influx of immigrants into our country, or go to church, we are, in part, behaving as a human animal with our own unique evolved nature—human nature. This means two things. First, our thoughts, feelings, and behavior are produced not only by our individual experiences and environment in our own lifetime but also by what happened to our ancestors millions of years ago. Second, our thoughts, feelings, and behavior are shared, to a large extent, by all men or women, despite seemingly large cultural differences. Human behavior is a product both of our innate human nature and of our individual experience and environment. The implications of some of the ideas in this article may seem immoral, contrary to our ideals, or offensive. Why Beautiful People Have More Daughters,

Discovering Assumptions The instructor strode into the classroom empty handed. He nodded to the class and checked his watch. Seven P.M. Procrastination: Ten Things To Know Is your procrastination hindering you? Ten things you should know. There are many ways to avoid success in life, but the most sure-fire just might be procrastination . Procrastinators sabotage themselves. They put obstacles in their own path. They actually choose paths that hurt their performance.

List of Cognitive Biases Cognitive biases are tendencies to think in certain ways that can lead to systematic deviations from a standard of rationality or good judgment, and are often studied in psychology and behavioral economics. There are also controversies over some of these biases as to whether they count as useless or irrational, or whether they result in useful attitudes or behavior. For example, when getting to know others, people tend to ask leading questions which seem biased towards confirming their assumptions about the person. 10 Life-Enhancing Things You Can Do in Ten Minutes or Less It usually takes us much longer to change our moods than we’d like it to take. Here are ten things you can do in ten minutes or less that will have a positive emotional effect on you and those you love. . See it online at Oprah.com .

5 Psychological Experiments That Prove Humanity is Doomed Cracked.com's new book is now on sale. What follows is one of 22 classic articles that appear in the book, along with 18 new articles that you can't read anywhere else. Psychologists know you have to be careful when you go poking around the human mind because you're never sure what you'll find there. What is a logical fallacy? A "fallacy" is a mistake, and a "logical" fallacy is a mistake in reasoning. There are, of course, other types of mistake than mistakes in reasoning. For instance, factual mistakes are sometimes referred to as "fallacies". However, The Fallacy Files is specifically concerned with logical errors, not factual ones. How the Brain Stops Time One of the strangest side-effects of intense fear is time dilation, the apparent slowing-down of time. It's a common trope in movies and TV shows, like the memorable scene from The Matrix in which time slows down so dramatically that bullets fired at the hero seem to move at a walking pace. In real life, our perceptions aren't keyed up quite that dramatically, but survivors of life-and-death situations often report that things seem to take longer to happen, objects fall more slowly, and they're capable of complex thoughts in what would normally be the blink of an eye. Now a research team from Israel reports that not only does time slow down, but that it slows down more for some than for others.

Hedgehog's Dilemma Both Arthur Schopenhauer and Sigmund Freud have used this situation to describe what they feel is the state of individual in relation to others in society. The hedgehog's dilemma suggests that despite goodwill, human intimacy cannot occur without substantial mutual harm, and what results is cautious behavior and weak relationships. With the hedgehog's dilemma, one is recommended to use moderation in affairs with others both because of self-interest, as well as out of consideration for others. The hedgehog's dilemma is used to explain introversion and isolationism. Schopenhauer[edit] The concept originates in the following parable from the German philosopher Arthur Schopenhauer's Parerga und Paralipomena, Volume II, Chapter XXXI, Section 396:[1]

Top 10 Explanations for The Bermuda Triangle The Bermuda Triangle, as we call it today, was coined by the writer Vincent Gaddis in 1964 when he wrote a cover story for Argosy magazine about the strange disappearance of Flight 19. Also known as ‘The Devil’s Triangle’ or the ‘Isle of Devils’, the Bermuda Triangle is popularly thought to be an area in the Atlantic Ocean off the coast of Florida to one small island in Bermuda to an island in Puerto Rico. From point to point the area spans into an imaginary triangle. According to many scientists today, however, the only boundaries it truly defines are the ones between fantasy and fiction. The Bermuda Triangle is inaccurately known as a place where more ships and planes have mysteriously disappeared than anywhere else in the world, but why? Here are the top ten reasons the Bermuda Triangle has received a reputation as a possible epicenter of alien abductions, ghost ships, sea monsters, time portals, and other madness and mayhem.

Howstuffworks "How Police Interrogation Works" There are "Law & Order" addicts everywhere who think they could get a perp to confess. A little glaring, some getting in the guy's face, a revelation that his fingerprints are all over the murder weapon and voilà! He's recounting his crime. Logical Problems - Very Easy Logic Puzzles <p style="font-style:bold; color:red"> Warning: Solutions are currently displayed. To hide and show the solutions as desired, enable javascript on your browser </span></p> 1. The Camels Four tasmanian camels traveling on a very narrow ledge encounter four tasmanian camels coming the other way.