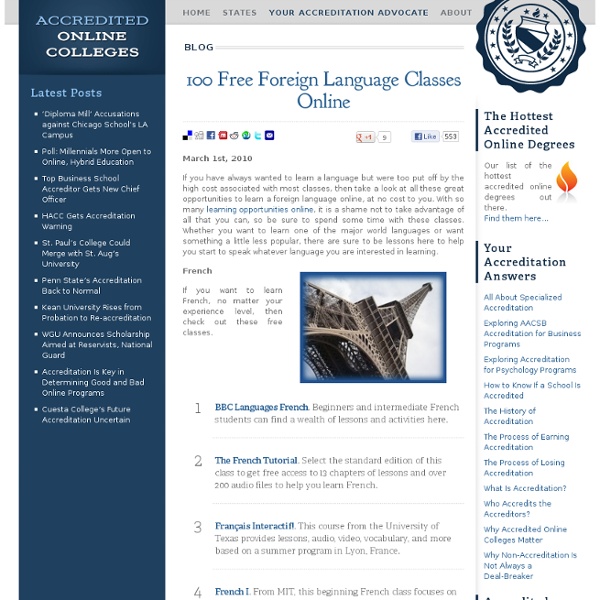 March 1st, 2010 If you have always wanted to learn a language but were too put off by the high cost associated with most classes, then take a look at all these great opportunities to learn a foreign language online, at no cost to you. With so many learning opportunities online, it is a shame not to take advantage of all that you can, so be sure to spend some time with these classes. Whether you want to learn one of the major world languages or want something a little less popular, there are sure to be lessons here to help you start to speak whatever language you are interested in learning. French If you want to learn French, no matter your experience level, then check out these free classes. BBC Languages French. Spanish From the basics to more advanced college courses in Spanish, see what is available in this listing. Learn Spanish. German Learn German from these free classes. BBC Languages German. Italian Italian Language Course. Portuguese BBC Languages Portuguese. Japanese Chinese Chinese I.

Can You Solve 'Einstein's Riddle?' In this TED-ED video, we're presented with what's called "Einstein's Riddle." As the video-makers admit, it apparently has nothing to do with Einstein, aside from being a fairly tough puzzle to crack. If you enjoy logic puzzles, you'll want to set aside ten minutes for this one! "Einstein's Riddle" is a form of Zebra Puzzle, in which you're provided with a series of facts, then asked to deduce one fact that's not presented. Kamasutra sex positions The Kamasutra is the bible of sex positions. It was written in India between 400 BC and 200 BC. Originally it wasn't just a sex positions manual but a whole way of life! However, if it's sex positions you're after then you've come to the right place! The Kamasutra contains very detailed instructions to different sex positions and we've come up with handy little illustrations to help you get to grips with them!

The Pedagogy of Play and the Role of Technology in Learning The goal of the videogame “Civilization” is to build a civilization that stands the test of time. You start the game in 4000 B.C. as a settler and, with successful gameplay, can create a civilization that lasts until the Space Age. Throughout the game, you need to manage your civilization’s military, science, technology, commerce and culture. Language Network Resources Three different organizations have been crucial to the development of Chinese language learning K-12 in the U.S., listed here in the order that they became involved in promoting Chinese language instruction since the 1980s: the Chinese Language Association for Elementary-Secondary Schools (CLASS), the College Board, and the Asia Society. Their websites are listed here and should be consulted by those exploring Chinese language programs. • Chinese Language Association of Secondary-Elementary Schools (CLASS) | www.classk12.org The Chinese Language Association of Secondary-Elementary Schools (CLASS) is a national nonpolitical and nonprofit professional association of all persons interested in teaching Chinese language and culture at pre-collegiate levels of American schools. • Chinese Language and Culture Initiatives (College Board) | www.collegeboard.com Listed below this entry are the several programs of the College Board Chinese Language and Culture Initiatives.

75 Free Language Learning Resources Online Whether you’re trying to learn English, Spanish, French, Portuguese, Japanese, Chinese, Italian –you get the picture – it’s good to get free help along the way. Luckily, there are tons of free online resources out there. Here are 75 to get you started … My Wife And I Never Said 'No' To Our Kids, And This Is What Happened What are the children of ‘Yes Parenting’ like? originally appeared on Quora - the knowledge sharing network where compelling questions are answered by people with unique insights. Answer by Robert Reiland, who practiced noncoercive parenting and used an unschooling approach, on Quora: I don’t know if “Yes Parenting” is the same as the parenting style my late wife and I used, but it seems similar. What we did was called either “non-coercive parenting” or “taking children seriously.”

What Door Would You Walk Through - personality test Pick the door that looks the most appealing to you. This might reveal a few things about your personality. Let us know what door you picked and if the answer was accurate for you. Feel free to SHARE! 1 - You are a fun individual that likes to keep things light and airy.

The Center @ MDC Save the Date! May 7 - 10, 2014 Four days of intensive workshops on fiction, nonfiction, poetry, publishing, and more! All of them taught by respected visiting authors and agents in the heart of downtown Miami at the Wolfson Campus of Miami Dade College. A Base Vocabulary List for any language Your Base Vocabulary: The first ~625 words [Author's note: Behold, the new, improved list:] Check these out at the Word Lists page! Your Base Vocabulary: Your first 625 words This is a new, improved version of an older list of 400 words. In my own studies, I’ve found that having an extra couple hundred words in the beginning makes everything a lot easier; you feel more comfortable with spelling and pronunciation, you recognize many more words in your textbook, and you can start delving into grammar while feeling like a bad-ass. Nice.

Any phonetic script can be learned in just a few hours If you liked my association technique mentioned below, you would also enjoy my tips on using imagination to memorize vocabulary, which are discussed in great detail with many other hacks in the Language Hacking Guide. See the most popular posts on the right below for other interesting topics. For those curious, this post discusses Thai, but the ideas can equally be applied to other phonetic scripts such as Japanese (but not as well for Chinese). Just one week into the challenge of reading/speaking Thai in 8 weeks (actually only about 5 hours total, since I’ve been quite busy since I arrived, but I’ve made time to learn on the skytrain/in restaurants/taxis etc.) and I’ve reached the first major milestone already. I can read Thai.

If You Learn This 10-20-30 Rule, Every Presentation You Give Will Be Excellent Very few of us enjoy creating presentations. It requires hours of uncertain work poring over slide after slide, hoping to get our message across. The greatest fear is watching our audience grow bored, frustrated, or occasionally even asleep. Free Language Tutorials: Basic Phrases, Vocabulary, Grammar, and Pronunciation in 17 Languages Currently, twenty languages are available: 17 Indo-European and 3 non-Indo-European. There are also Foreign Service Institute (FSI) courses available in HTML format as well as two comparative tutorials for those who want to learn two languages simultaneously. Lists of vocabulary and verb conjugations are available for some Romance and Germanic languages, as well as other helpful ideas, resources and links for learning foreign languages.

One Minute Mandarin One Minute Mandarin provides an introduction to basic Mandarin. With this course you will not become fluent, but you will acquire a range of useful expressions which you can use while on a trip to China. Your efforts are guaranteed to make a good impression on people you meet.