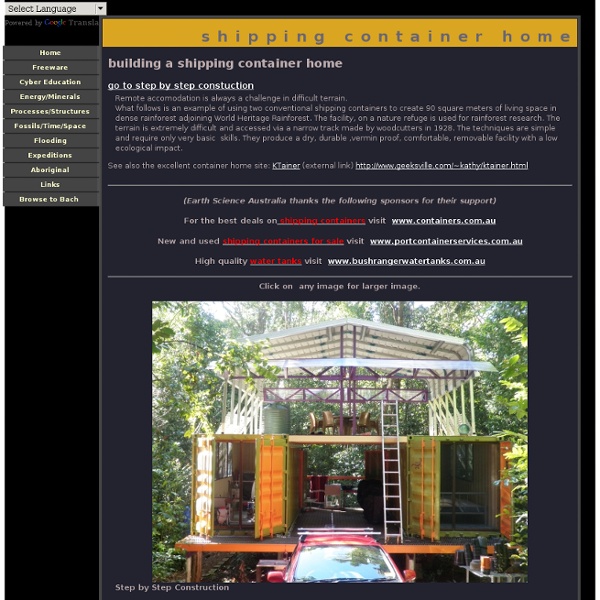 go to step by step constuction Remote accomodation is always a challenge in difficult terrain. What follows is an example of using two conventional shipping containers to create 90 square meters of living space in dense rainforest adjoining World Heritage Rainforest. The facility, on a nature refuge is used for rainforest research. The terrain is extremely difficult and accessed via a narrow track made by woodcutters in 1928. The techniques are simple and require only very basic skills. See also the excellent container home site: KTainer (external link) Step by Step Construction We cleared the 1928 timber access track by hand using axes and dragging the material, various distances into the surrounding bush. In less severe terrain a 40' container might be better value, however the larger container at about 3.5 tonnes would require a much larger truck and a much better road. We used two 6m (20') containers placed 3m (10') apart. Related:  Alternative Lifestyle

Blue Me Portable Vacation Home | Modern Industrial Design and Future Technology - Tuvie Email Presenting you the all-new vacation home, which is portable! Yes you heard it rightly. Designer : Anton Markus Pasing via Dvice Ubuntu (philosophy) Ubuntu (/ʊˈbuːntʊ/ uu-BOON-tuu; Zulu pronunciation: [ùɓúntʼú])[1][2] is a Nguni Bantu term roughly translating to "human kindness."[dubious ] It is an idea from the Southern African region which means literally "human-ness," and is often translated as "humanity toward others," but is often used in a more philosophical sense to mean "the belief in a universal bond of sharing that connects all humanity".[3] In Southern Africa, it has come to be used as a term for a kind of humanist philosophy, ethic or ideology, also known as Ubuntuism or Hunhuism (the latter after the corresponding Shona term) propagated in the Africanization (transition to majority rule) process of these countries during the 1980s and 1990s. Since the transition to democracy in South Africa with the Nelson Mandela presidency in 1994, the term has become more widely known outside of Southern Africa, notably popularized to English language readers by Desmond Tutu (1999). Stanlake J. Jump up ^ Tutu, Desmond.

Solar Power Much Cheaper to Produce Than Most Analysts Realize, Study Finds By Joe Romm on December 11, 2011 at 10:22 am "Solar Power Much Cheaper to Produce Than Most Analysts Realize, Study Finds" The public is being kept in the dark about the viability of solar photovoltaic energy, according to a study conducted at Queen’s University.“Many analysts project a higher cost for solar photovoltaic energy because they don’t consider recent technological advancements and price reductions,” says [co-author] Joshua Pearce, Adjunct Professor, Department of Mechanical and Materials Engineering. That’s the news release for a new journal article, “A review of solar photovoltaic levelized cost of electricity” (subs. req’d). That argument is one Climate Progress and others have been making for a while (see ‘Ferocious Cost Reductions’ Make Solar PV Competitive and Utility CEO on Solar: In “3 to 5 Years You’ll Be Able to Get Power Cheaper from the Roof of Your House Than From the Grid”.) Here’s more for the news release (plus some more must-have CP charts):

Ayahuasca Tourism in South America Written for Anthropology of Tourism, University of Maryland at College Park John N. Grunwell Within the last fifteen years or so, a grass-roots ayahuasca tourism industry has sprung up, with outposts all over Amazonia. Perhaps the ayahuasca tourism phenomenon is best understood as part of this culture, a culture that increasingly seeks to know itself and nature better, both as individual entities and interconnected systems. Outsider's attraction to ayahuasca What brings people from all over the world to South America, simply to use ayahuasca? The most influential books of the last decade and a half are likely those of Terence McKenna, author of such works as Food of the Gods,The Archaic Revival, and True Hallucinations. ...it's not a frivolous pursuit... there's a certain amount of dread attached to taking it -- you have a hallucinogenic trip that deals with death and your mortality. Another well-know musician to speak of their ayahuasca experience is Paul Simon. Conclusion Works Cited

Bob Dylan sings about gay love on LGBTQ wedding songs collection | Music | The Guardian Bob Dylan is among six acts appearing on a new compilation EP that features “reimagined” versions of traditional wedding songs for same-sex couples. Universal Love opens with Dylan’s rendition of the 1929 great American songbook classic She’s Funny That Way, revamped as He’s Funny That Way. Rob Kaplan, the compilation’s producer, told the New York Times that Dylan was enthusiastic about the project. “And it wasn’t just, ‘Yes, I’ll do this’, it was, ‘Hey, I have an idea for a song.’” The compilation also features contributions from St Vincent (AKA Annie Clark), who turns the Crystals’ And Then He Kissed Me into And Then She Kissed Me. “For years I said that I’m not getting married until any two people can legally marry in this country,” Kesha told the New York Times, while Valerie June said her version of Coward’s song restored it to its original intentions: “It brings the song full circle to know that it was written by a gay man who meant every single word of Mad About the Boy.”

HalliburtonBellaireBlvdOfficesHouston - Halliburton American energy services and products company Halliburton Company is an American multinational corporation. One of the world's largest oil field service companies, it has operations in more than 70 countries.[6] It owns hundreds of subsidiaries, affiliates, branches, brands, and divisions worldwide and employs approximately 55,000 people.[7] The company has dual headquarters located in Houston and in Dubai, and it remains incorporated in the United States.[8][9][10] The company has been involved in numerous controversies, including its involvement with Dick Cheney and the Iraq War, and the Deepwater Horizon, for which it agreed to settle outstanding legal claims against it by paying litigants $1.1 billion. Business overview[edit] Halliburton annual revenue Locations[edit] Worldwide technology centers are in Duncan, Oklahoma; Carrollton, Texas; Houston, Texas; Pune, India; and Singapore. Divisions[edit] History[edit] Early history (as HOWCO)[edit] In 1919, Erle P. Erle P. As Halliburton[edit]

High Pressure Aeroponic System Flowchart – Block Diagram Here’s a block diagram (flowchart) of a basic high pressure aeroponic system. Let’s take a trip through the aeroponic system starting with the misters or nozzles. First – Solenoids (Automatic valves) The solenoids attached to the misters work as valves to open or close the flow of nutrient to the misters. Second – Store it in the reservoir Any nutrients not absorbed by the roots get returned to the reservoir at the bottom of the root zone by dripping through a drain with an inline filter. The nutrient is stored here until the system calls for more pressure. Monitor nutrient level As the nutrient is used and as the plant grows, your reservoir will drop lower and lower. Main component – Pressure Pump The pump will send the pressurized nutrient to the pressure tank which acts like a big bladder that expands like a tough balloon. Now at the Tank Since the tank is pre-pressurized with the nutrient, when the misters call for nutrient at 100 psi, it would be there instantly. Sensing system pressure

George Washington Carver's Favorite Peanut Recipes BULLETIN NO. 31 JUNE 1925 How to Grow the Peanut and 105 Ways of Preparing it for Human Consumption Seventh Edition, January 1940 By GEORGE CARVER, M. S. in Agr., Director EXPERIMENTAL STATION, TUSKEGEE INSTITUTE, Tuskegee Institute, Alabama Reprinted 1983 for Tuskegee Institute National Historic Site, George Washington Carver National Monument by Eastern National Park and Monument AssociationOf all the money crops grown by Macon County farmers, perhaps there are none more promising than the peanut in its several varieties and their almost limitless possibilities. Of the many good things in their favor, the following stand out as most prominent: Like all other members of the pod-bearing family, they enrich the soil. They are easily and cheaply grown. For man the nuts possess a wider range of food values than any other legume.

How To Grow Wandering Jew Plant Outside As Ground Cover Planning to have wandering jew plants outdoors as ground cover? Yes, it’s possible! Overall, wandering jews are relatively easy to take care of and are really adaptable. Although it is commonly grown as a hanging houseplant, you can also have them as a cover for big outdoor areas. Wandering Jew is not a single type of plant. Actually, its name is given to a wide variety of plants under the genus "Tradescantia". ​You’ve probably heard of Tradescantia zebrina and Tradescantia fluminensis too since all of them are also called wandering jew. How to plant wandering jew outdoors? Varieties of wandering jew basically have the same needs and requirements so you don’t have to worry about the difference. If you already have them as a houseplant, caring for them as a ground cover will be fairly easy. Temperature and Growing Zones Before considering planting these plants outside, you must first know if they can withstand the environment outside. Can Wandering Jew take full sun? Pruning and Propagation

Homemade Potting Media Many cost conscious home gardeners and do-it-yourselfers are often looking for cheaper ways of growing plants for home and garden use. One way to achieve this may be by making homemade potting media rather than purchasing pre-made materials at garden centers and home supply stores. Although purchasing the base ingredients and developing your own mix may not result in a cheaper mix, it does offer the opportunity to be creative and to modify mixes for specific goals or plants that you feel would make a media better for your situation. The following information will provide you with a basic understanding of potting media ingredients and steps for making a homemade media from scratch. Potting media, which has a coarser texture than garden soil, is commonly used in container gardens and in trays for sowing seeds. Media Ingredients Either soil-based or peat-based potting media can be made at home by combining individual ingredients. Making Soil-based Potting Media Prepared by, Kathleen M.

5 Secrets to Vegetable Garden, Companion Planting Revealed - Organic Authority What is Companion Planting? Companion planting is simply planting different garden plant species next to each other, so that one or both of the plants benefits one another. Companion planting is sometimes referred to as a botanical "buddy system". Intermixing the right combination of garden plants like vegetables, herbs and flowers. Each one when planted thoughtfully, can help repel annoying insects and limit the spread of diseases. Implement these five tips and you'll be well on your way to growing a healthy and delicious vegetable garden! Vegetable Garden Friends 1.Use tall sun loving plants to shade cool season crops. 2.Grow garden plants with deep and shallow roots together. Plant For Pest Control 3. Members of the onion family repel plant-eating insects. When beans and potatoes are planted together, both species benefit. Disperse radishes around the garden. 4. Vegetable Garden Plant No, No's 5. Maureen Farmer is a master gardener and has loved plants all her life.