Ten Anime Series You Should See Before You Die 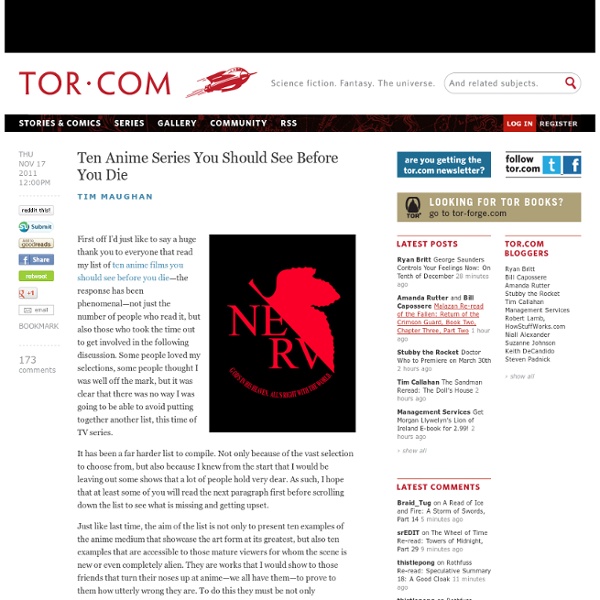 First off I’d just like to say a huge thank you to everyone that read my list of ten anime films you should see before you die—the response has been phenomenal—not just the number of people who read it, but also those who took the time out to get involved in the following discussion. Some people loved my selections, some people thought I was well off the mark, but it was clear that there was no way I was going to be able to avoid putting together another list, this time of TV series. It has been a far harder list to compile. Not only because of the vast selection to choose from, but also because I knew from the start that I would be leaving out some shows that a lot of people hold very dear. As such, I hope that at least some of you will read the next paragraph first before scrolling down the list to see what is missing and getting upset. Cowboy Bebop (1998) - 26 episodes Paranoia Agent (2004) - 13 episodes Gunslinger Girl (2003) - 13 episodes Future Boy Conan (1978) - 26 episodes

Year In Review: The 11 Best Short Films of 2011 Over the course of the year, curating the Short Film of the Day feature has given me a deep and affecting appreciation of the art form. Before, I hadn’t given much thought to the little bastards, but the truth is that they are incredibly versatile and representative of the boundaries that film can break. They can be jokes told well or human dramas driven home. They can be a perfect bite or demand to be expanded into a full meal. They can feel classic or break out into the long, strange realm of experimentation. They are so much more than movies with short runtimes. There’s one difficulty in judging them, though. The other (small) problem is that sometimes short films spend a long time touring festivals and otherwise being unavailable online. 11. In this sweetly dark comedy from writer/director Bradley Jackson features Ralph Winston (Keir O’Donnell) as a children’s party clown who has never cried in his entire life. 10. 9. 8. Absurdity lives. 7. 6. Spike Jonze.

Ten Anime Films You Should See Before You Die One of the most surprising, and gratifying, things that has happened since I started my blog, Tim Maughan Books, a year or so ago is the positive feedback I’ve had for the anime reviews—especially from people I know are far from being massive fanboys like myself. It’s gratifying because its part of the reason I started writing them; to try and introduce the medium to people who had never really indulged in it all, at least not past perhaps watching Spirited Away with their kids. The problem is, once you’ve had your first taste, where do you go next? Type ‘anime’ into Google and the results are bewildering, and without a little bit of guidance and a quality filter finding something to watch can be a daunting task. Akira (1988) For many of us in the west, this is the one that started it all. Ghost in the Shell (1995) My Neighbor Totoro (1988) I’ve talked at length elsewhere about how personally important My Neighbour Totoro is to me, so here I’ll try not to gush too much. Porco Rosso (1992)

The Best Horror Movies of 2011 [The Top 10 Released and Top 5 Unreleased] 2011 was a really shitty year for horror. There’s no reason to dance around it; it just sucked. Sure, some good movies managed to find release, but not nearly enough. You know it’s been a bad 12 months of genre when it’s a struggle to assemble a Top 10 filled with films that leave any kind of a significant mark– and even then, several are just unreleased films from 2010. But such is the genre these days… The Best Horror Movies of 2011 10. The latest from May director Lucky McKee isn’t for everyone. 9. I’ve taken a lot of flak for defending the hell out of Fright Night, but I’ll take everything the haters have got if it means at least one more person gives this smart, unique remake a shot. 8. Seconds Apart is the most interesting flick After Dark Horror films has ever been involved with. 7. 6. Jee-woon Kim’s I Saw the Devil is one of the most brutal movies you’ll see this or any year. 5. It’s a shame that Undocumented didn’t become the hit it deserved. 4. 3. 2. 1. 5. 4. 3. 2. 1. 5. 4. 3.