Psychology Today: A Nation of Wimps 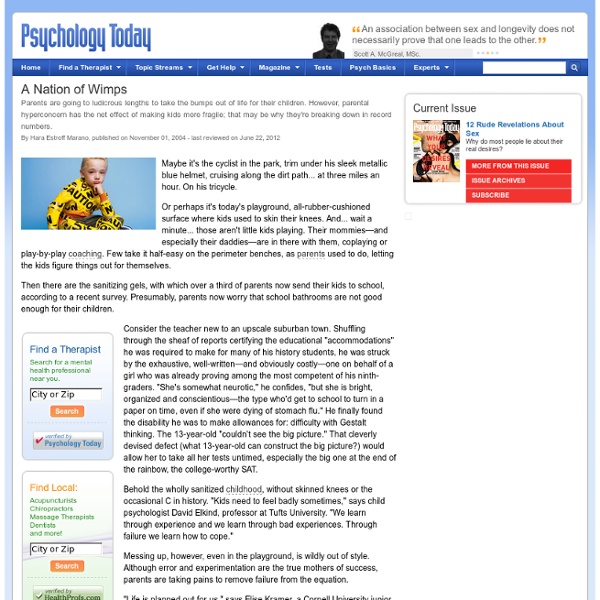 Maybe it's the cyclist in the park, trim under his sleek metallic blue helmet, cruising along the dirt path... at three miles an hour. On his tricycle. Or perhaps it's today's playground, all-rubber-cushioned surface where kids used to skin their knees. And... wait a minute... those aren't little kids playing. Their mommies—and especially their daddies—are in there with them, coplaying or play-by-play coaching . Then there are the sanitizing gels, with which over a third of parents now send their kids to school, according to a recent survey. Consider the teacher new to an upscale suburban town. Behold the wholly sanitized childhood , without skinned knees or the occasional C in history. Messing up, however, even in the playground, is wildly out of style. "Life is planned out for us," says Elise Kramer, a Cornell University junior. No one doubts that there are significant economic forces pushing parents to invest so heavily in their children's outcome from an early age.

Why the &quot;loudness wars&quot; are killing today&#039;s music July 03, 2006 Why the “loudness wars” are killing today’s music Pull out a vinyl record from the 70s or early 80s, and listen to it. Odds are it’ll have a big dynamic range — it’ll be whisper-quiet in some parts and booming loud in others. You’ll pick up new nuances every time you listen to it. Now listen to any music track recorded in the last ten years, and it’ll be radically different. Nope, says a writer at Stylus magazine. See those two graphs overhead? But so what? One result of [overcompression] is that modern CDs have much more consistent volume levels than ever before. I’ve messed around with lots of home-recording technology — for music and for my Wired podcasts — and this guy’s right. (Thanks to Andrew Hearst for this one!) <a href="

World much stupider than returning soldier remembered [TSA] If you ever needed proof that we are lost in a sea of pointless rules designed to make traveling (and indeed life in general) more difficult than it ever needed to be, this is it. The eminent minds at TSA saw fit to confiscate an armed soldier’s nail clippers because he might use them to take over the plane. At this point I would like to point out that he was not armed with nail clippers, he was armed with an assault rifle – which was apparently acceptable because it didn’t have bullets. The icing on the cake, swabbing all of the soldiers returning from a war-zone for explosives residue… of course they all failed – but not as hard as the guy who kept swabbing. In response to all of the comments, please read our update. [Picchore]

BUILDYOURMEMORY.COM / A mnemonics and memory improvement resource Fed by Birds: Beautiful Eyeballs The Science Museum's online History of Medicine exhibition has as you might expect plenty of curious objects - like mole hands from Norfolk that warded off cramp: mummified birds: and eye-catching good-luck amulets: What's surprising is how attractive some of the trappings of illness were - elegant bronchitis kettles: Staffordshire feeding cups for invalids: Backrests for the bedbound: Smart medicine chests: Containing all kinds of delicious-looking medicine: Of course, anything can look appealing if it's presented in the right sort of case: See also: Peculiar and BreakableTylor's Bewitched Onion Seed: Who Wants to Be a Cognitive Neuroscientist Millionaire? Ogi correctly answers the $250,000 question. Courtesy of Valleycrest Productions. Boston University’s doctoral program in cognitive neuroscience prepares students for a career in brain modeling, robot design, or biomedical engineering—or for winning cash on the television quiz show Who Wants to Be A Millionaire?. Researchers in my department, Cognitive and Neural Systems (CNS), seek to understand the brain’s mechanisms, including three cognitive systems that happen to be essential for a profitable performance on Millionaire: learning, memory, and decision-making. I went to New York, where I passed a multiple-choice audition test. The first technique I drew upon was priming. I used priming on my $16,000 question: “This past spring, which country first published inflammatory cartoons of the prophet Mohammed?” I used priming even more explicitly on my $50,000 question: “Which of the following acronyms represents an organization that does not include the word ‘Association?’” “That’s right!”

Psychology Today: The Girl With a Boy&#039;s Brain "Don't step on that—it's not a rug!" warns Kiriana Cowansage. It's a 9,000-piece puzzle of the astrological heavens, half completed, which she's putting together on the floor of her brightly colored studio apartment in Manhattan's West Village. Kiriana, a 24-year-old graduate student, is enamored of details. She's also easily absorbed: A week earlier, she worked on the puzzle for 10 straight hours, without pausing for so much as a sip of water. A clothing maven, she's fashionably put together in chunky jewelry and a black minidress with billowing sleeves. Such perplexing contradictions are the hallmarks of Asperger's Syndrome (AS), with which Kiriana was diagnosed when she was 19. Kiriana fits the AS profile quite neatly. Other experts attribute some of the gender gap to the widespread misdiagnosis of girls. When she was 4, Kiriana became infatuated with dinosaurs. In school, Kiriana barely spoke at all.

Dirty Little Secrets in NYPD's Internal Affairs Bureau Earlier this year, the Voice uncovered a troubling pattern of how the NYPD operates, relying on secretly recorded tapes to show that street cops are under intense pressure to achieve seemingly contradictory goals set down by their superiors. Years of recordings, lawsuits, and testimonies by active and retired police officers reveal that Ray Kelly's police department has been on an intense program that punishes innocent bystanders while intimidating and harassing actual crime victims. We've heard relatively little, however, about the NYPD wing that is supposed to be watching for these kinds of injustices: the Internal Affairs Bureau. Until now. More officers have come forward, telling the Voice that the secretive police-department-within-a-department is as troubled as the rest of Kelly's operation. C.S. Filing a lawsuit as "John Doe," a gay detective in IAB says he is constantly harassed. Ashlei Quinones Persecution complex: The Internal Affairs Bureau at 315 Hudson Street Details More About

Cognitive Daily: What can you remember in a glimpse? The text below will bring up an animation. Just look at it once — no cheating! A picture will flash for about a quarter of a second, followed by a color pattern for a quarter second. Then the screen will go blank for about one second, and four objects will appear. Use the poll below to indicate which object (#1, 2, 3, or 4) appeared in the picture. Click here to view the animation! I’ll let you know which answer was correct at the end of the post, but this test approximates the procedure of an experiment conducted by Kristine Liu and Yuhong Jiang, designed to measure the capacity of visual working memory. Previous studies have had conflicting results, with some indicating we can remember a large number of details of a briefly presented scene, and others suggesting that we don’t notice differences between scenes even when we look at them for several seconds (see this Cognitive Daily article for one example). So were we able to replicate their experiment?

Visual Cliff - Psychology experiment Infants develop an avoidance reaction to the appearance of depth by the age of 8 to 10 months, when they begin to crawl. This discovery was made on the surface of an apparatus called the visual cliff. The latter is a table divided into two halves, with its entire top covered by glass. One half of the top has a checkerboard pattern lying immediately underneath the glass; the other half is transparent and reveals a sharp drop of a metre or so, at the bottom of which is the same checkerboard pattern. The infant is placed on a board on the centre of the table. The mother stands across the table and tries to tempt her baby to cross the glass on either the shallow or the deep side. Infants younger than seven months will unhesitatingly crawl to the mother across the deep side, but infants older than eight months avoid the deep side and refuse to cross it. source: Encyclopedia Britannica

Hoarding Hoarding is usually considered a subtype of Obsessive Compulsive Disorder (OCD). Like other compulsive behaviors, hoarding is an effort to manage the anxiety raised by obsessive doubts. There are varying levels of hoarding behavior. A diagnosis of OCD of the hoarding type is made when there is significant distress or disruption to feelings of self-worth, interpersonal relationships, education, occupation, housing, finances, legal issues, or health as a result of hoarding behavior. Symptoms vary from person to person, but may include: Saving items seen by most people as unneeded or worthless, (i.e., not true collectibles). Compulsively buying or saving excessive quantities of items of any kind. Treating all saved items as equally valuable--whether or not the object has sentimental, financial or functional value. Experiencing intense anxiety or distress when attempting to discard-or even think about discarding-what most others view as useless objects. Avoid repetitive questioning (e.g., "Why?

Be lucky - it&#039;s an easy skill to learn Take the case of chance opportunities. Lucky people consistently encounter such opportunities, whereas unlucky people do not. I carried out a simple experiment to discover whether this was due to differences in their ability to spot such opportunities. I gave both lucky and unlucky people a newspaper, and asked them to look through it and tell me how many photographs were inside. For fun, I placed a second large message halfway through the newspaper: "Stop counting. Personality tests revealed that unlucky people are generally much more tense than lucky people, and research has shown that anxiety disrupts people's ability to notice the unexpected. The experiment was then repeated with a second group of people, who were offered a large financial reward for accurately watching the centre dot, creating more anxiety. And so it is with luck - unlucky people miss chance opportunities because they are too focused on looking for something else.