Eating, Drinking & Living The Way A Man Should 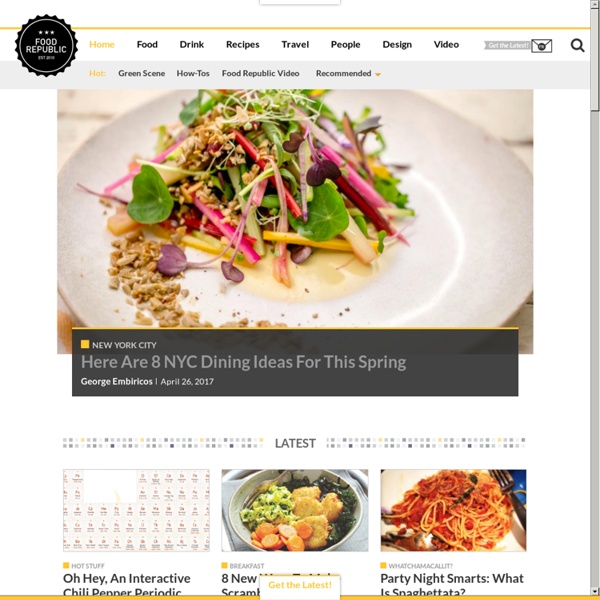 I Can't Believe It's Cutty: Victory Is Mine Cocktail Recipe Scotch cocktail takes you back to Prohibition times Apr 17, 2014 4:00 pm For many who would consider it blasphemy to put a good single malt whisky into a cocktail, there are several alternatives and new to the pack is Cutty Sark Prohibition Edition. Scotch and egg whites are not often seen in the same drink, but with this cocktail, the spirit’s assertive profile is taken down a few notches by adding lime, apricot liqueur and bitters. Read on.

Everything You Need to Know to Order Wine on a Date in One Chart Selecting the perfect wine pairing can be intimidating, especially if your sub-conscience is already going crazy trying to woo the first person to agree to go on a date with you in months. The experts at Seattle’s Wine Folly are here to not only relieve your ordering stress, but also earn you some bonus points with basic wine knowledge. The brand new wine guide breaks down the flavors in sparkling, white, red, and dessert wines. After you select the perfect bottle, the guide will also help your break out some education talking points like decoding the bottle’s label. You can even play a guessing game after your first sip like “What fruits do you taste?”

Food - Twitch Show/Hide Browse Followed Games ontheroofs In the Chungking Mansions you can find everything: tiny guest houses with just a few rooms for rent, curry cafes, a market on the ground floor, a variety of shops, currency exchange offices, touristic offices, where you can get a Chinese visa. Next to the main entrance, you can always find the Indians and the Pakistanis, offering you to buy some hash, weed or even cocaine. During one of our trips, I decided to check what they will sell, to bate my curiosity. For 120 Hong Kong dollars, I got 3 grams of Kashmir hashish. 051. Simulation Theory and the Nature of Reality with Physicist and Author, Tom Campbell. - “When the original founding fathers of quantum mechanics were doing these experiments they were really excited… making statements like- ‘if quantum mechanics doesn’t blow your mind, that’s because you don’t understand quantum mechanics.’ They realized this was a really big deal philosophically, (and) scientifically… Then they tried to come up with a good explanation. They couldn’t find one… Now they just blow it off as ‘nobody will ever know… it’s just weird science.’ This My Big Toe theory though, explains it.” -Tom Campbell If that chopped up quote sounds vague, pseudo science-y, or possibly confusing (especially if you’re not familiar with some of the basic ideas behind quantum mechanics) I get that.

proper glasses for the proper wine Anyone who has been involved with wine, especially from the wine drinking or tasting point of view will know about Riedel wine glasses. Even the great Robert Parker of The Wine Advocate worships them - they must then be really, really great! You may be iterating that a glass is a glass; well, yes and no. Stoa del Sol The Stoa of the ancient Greco-Roman world was a teaching forum for the philosophical precepts of Stoicism. First expounded upon by Zeno of Citium (c. 366-264 b.c.e.), Stoicism was one of the loftiest and most sublime philosophies in the record of Western civilization. Its scope included a cosmology, logic, and ethics. And its impact has reached down through the centuries--early Greek Stoicism, later Roman Stoicism, Stoic influence in Christian thought, Stoic thought found in the humanism of the Renaissance, and beyond this in the pantheistic philosophy of Spinoza. The Stoa del Sol is a contemporary forum for essays that reflect some of the historical principles of Stoicism in relation to a New Cosmology and New Spiritual Paradigm prompted by modern science and systems theories. Stoicism is a doctrine that declares that all existence is confined within the limits of the sensible universe.

Ven. Bhikkhu Bodhi Bhikkhu Bodhi is an American Buddhist monk from New York City. Born in Brooklyn, New York, in 1944, he obtained a BA in philosophy from Brooklyn College (1966) and a PhD in philosophy from Claremont Graduate School (1972). Drawn to Buddhism in his early 20s, after completing his university studies he traveled to Sri Lanka, where he received novice ordination in 1972 and full ordination in 1973, both under the late Ven. Ananda Maitreya, the leading Sri Lankan scholar-monk of recent times. He was appointed editor of the Buddhist Publication Society (in Sri Lanka) in 1984 and its president in 1988. Ven.

An Illustrated Field Guide to the Art, Science, and Joy of Tea “The first sip is joy, the second is gladness, the third is serenity, the fourth is madness, the fifth is ecstasy,” Jack Kerouac wrote of tea in his 1958 novel The Dharma Bums. Late one night that year, he walked five miles with an enormous tape recorder strapped to his back to keep the woman he loved from taking her own life. Lois Beckwith didn’t die that night. She and Jack soon parted ways as lovers, but remained friends. Eventually, he introduced her to the man who would become her husband.

Flaneur Magazine »Rome is so boring, Rome is so dry.« Architectural performance group LAC, ATI and Stalker believe the answer to Rome’s future is the transformation of the ancient ruin Largo Argentina (located on Corso Vittorio Emanuele II) into a lake. Let the Romans swim! Let Romans touch their history instead of viewing it from afar! After several brainstorming sessions (scuba diving gear, crabs and safety floats being mentioned) Flaneur and the performers/architects met by the ruin armed with flyers, posters, empty vessels for collecting water and a model of the ruin-turned-lake including live gold fish. Through skills of persuasion we got passer-byers to sign petitions noting down how much water they are willing to donate, then as a symbolic start to the controversial transformation every petitioner had to take water from a fountain and pour it into the ruin.

Taki's Magazine - Home Page Most Popular Injured Parties Are Jews Losing Control of the Media? by Steve Sailer Joe Nolan's Insomnia Halloween Rising For this latest spooky October post, I’ve grown a little bit impatient with the month and I want to cut to the chase. Here’s a nice little primer on the Celtic roots of the Halloween holiday and its evolution through the ages to the seemingly silly, scary celebration we know today.