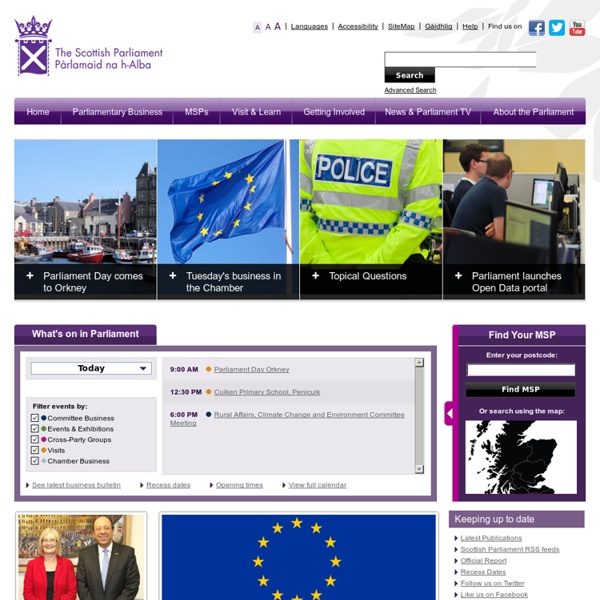 The Dungeons - Scary, historical, educational attractions - Official Site Scottish Parliament - About my vote, produced by The Electoral Commission What does it do? The Scottish Parliament represents the people of Scotland and has the power to make decisions and pass laws in the following areas: Economic developmentEducation and trainingThe environmentFarming, fisheries and forestryHealth and social servicesHousingLaw and orderLocal governmentPolice and fire servicesPlanningSport and the artsTourism. These are called devolved matters. How is it made up? There are 129 elected Members of the Scottish Parliament (MSPs) and, if you live in Scotland, you are represented by eight of them. The Scottish Executive is the government in Scotland and is responsible for all devolved matters. How is it elected? When you vote in a Scottish Parliament election, you have two votes – one to elect your constituency member and one to elect your regional member. In the constituency ballot, the candidate with the largest number of votes is elected. When is it elected? Elections for the Scottish Parliament take place every four years. Share this page

Scotland | £414m bill for Holyrood building The final cost of the Scottish Parliament building at Holyrood has been put at £414.4m. MSPs were given a final report on the "Holyrood Project" which showed that the price tag was some £16m cheaper than expected. Presiding officer George Reid also announced that the building's contractors will not be sued over construction delays. The constuction of the Holyrood complex has been formally declared complete. However, Mr Reid said legal action would be taken to recover the costs of a broken beam in the main chamber. The most recent estimate of the building costs had been £430.5m. Bill Aitken MSP, Scottish Conservative chief whip, said nobody had come out of the row over the Scottish Parliament with any great credit. "But at least some sort of grip was eventually exercised. An inquiry into the problems with the construction of the building was held by Tory peer Lord Fraser. He found systemic failures but no single "villain of the piece". 'Steely determination' New building

Welcome to Edinburgh Zoo Scottish Parliament - Yesterday and Today - The Early Years The Earliest TimesIn medieval times, the concept of a "parliament" would have been unheard of at a time when clan chiefs or minor kings ruled without question. There may have been groups of elders who gave "advice" but the leader of the society was often there by force of arms. After the Norman Conquest in England in 1066, the principle of king and vassals was reinforced. But the Normans did have a concept of a gathering of the most important nobles - though a strong king did not need to listen to them. When Charles I visited Scotland in 1633 (for the one and only time) he attended Parliament, sitting on a raised dais and overseeing the proceedings.

Holyrood visitor figures hit the heights - News & Media Centre :  Scottish Parliament Visitor numbers to Holyrood hit a high of more than 400,000 in 2009. The news came as the Scottish Parliament opened its doors for the first time in 2010 – the building re-opened to the public at 10am on Monday 4 January. A grand total of 420,982 people visited Holyrood between 1 January to 31 December 2009 – drawn in by free tours of the building, an award-winning festival and an event-filled anniversary programme. The figures mark an increase in visitor numbers of almost 27 per cent compared with the same period last year, and are only bettered by totals for 2005 – the first full year the Holyrood building opened – when 442,865 people visited. Figures also show that the number of visitors taking tours of Parliament increased by nearly 30 per cent in comparison to 2008. Presiding Officer Alex Fergusson MSP said: "As these figures show, 2009 marked an extremely a busy year for Holyrood, especially with our 10th anniversary activities. Highlights of 2009 included: Background