Testifying under oath could absolutely end Trump's presidency. UPDATE How to Fight for MSNBC's Progressive Lineup: Yes, Maddow could be next. There is a great diary here already on the proposed elimination of Lawrence O’Donnell’s The Last Word from the MSNBC lineup www.dailykos.com/ even as the program is beating CNN in that time slot and closing in on Fox News. 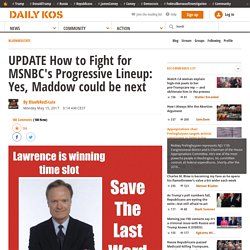 Here is the story in Huffington Post about the possible cancellation www.huffingtonpost.com/... About those ratings, MSNBC has finally found its groove. AdWeek posted this on May 7, 2017: MSNBC defeated CNN in prime time this past month, both in total audience and in the ad-friendly A25-54 demo.The network also continues to post more year-over-year prime time audience growth than both Fox News and CNN: +82 percent in total viewers and +61 percent in the prime time demo versus April 2016. How I Always Win the Abortion Argument. This past Friday, Tennessee Governor Bill Haslam signed the deceptively named “Tennessee Infants Protection Act,” a bill that does nothing for infants but prohibits physicians from performing abortions after the 20th week of pregnancy. 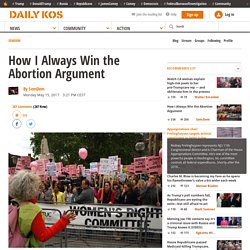 Tennessee Republicans blocked all efforts from Democrats to include exceptions for incest, mental health, or even rape. (After all, if a woman is raped, GOP lawmakers say it must be God's will.) The “pro-life" movement has never been about "life," it has, and always will, be about control. Control over a woman's reproduction—taken from the individual and given to GOP legislators, like Republican Billy Long (pictured). Yet when the Tennessee law was debated, among the countless other patriarchal attacks on women, I hear the same tired argument over and over again. Why are Republicans so cruel to the poor? Paul Ryan’s profound hypocrisy stands for a deeper problem.

Lakoff. 6 Progressive Types Flashcards. The coded language of the alt-right is helping to power its rise. I’ve always said that I appreciate all my readers, both those who agree with me and those who don’t. 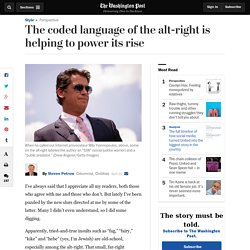 But lately I’ve been puzzled by the new slurs directed at me by some of the latter. Many I didn’t even understand, so I did some digging. Apparently, tried-and-true insults such as “fag,” “fairy,” “kike” and “hebe” (yes, I’m Jewish) are old-school, especially among the alt-right. Got a fake news headache? Dive instead into real news about progressive victories. A decade ago some barons of the media establishment designated themselves America’s official arbiters of political truth. 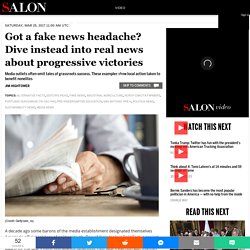 One of their tools is PolitiFact, a project of the Tampa Bay Times and several other major newspapers, which issues an award for the year’s most outrageous falsehood. Paul Ryan Demanded a Speedy Analysis of Obamacare. For the GOP Bill? No Rush. J. 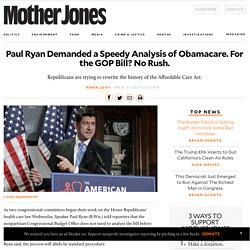 I didn’t think I’d ever leave the CIA. But because of Trump, I quit. (Adriana Usero/The Washington Post) Edward Price, a former analyst and NSC spokesman, said he thought he'd spend his career at the CIA. 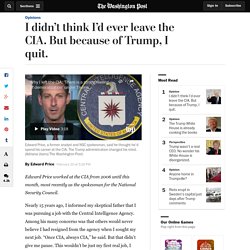 The Trump administration changed his mind. Edward Price, a former analyst and NSC spokesman, said he thought he'd spend his career at the CIA. The US Constitution allows for impeaching presidents who have "rendered themselves obnoxious" — Quartz. Back in the day, British kings claimed that God chose them for the throne, and no one could remove them… at least not legally. 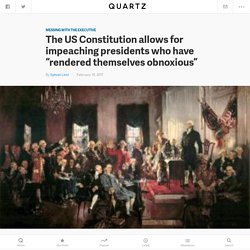 So in 1787, at a convention in Philadelphia, the framers of the US Constitution debated whether American law should include a process for removing presidents who had “rendered themselves obnoxious,” in Benjamin Franklin’s words. He suggested extending impeachment—a Roman legal institution allowing removal of senators but not emperors—to the Executive branch. Franklin said it was only fair to air accusations of misconduct, present evidence, and provide an opportunity for vindication. Uk.businessinsider. Donald Trump and Georgian President Mikhail Saakashvili unveil plans for a luxury apartment complex to be built along the Black Sea coast in Batumi, Georgia, on April 22, 2012. 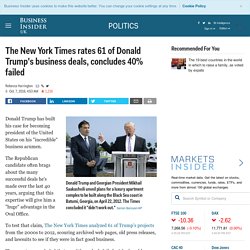 The Times concluded it "didn't work out. "Seiran Baroyan/AP Donald Trump has built his case for becoming president of the United States on his "incredible" business acumen. What America Owes Refugees From the Middle East - The Atlantic. Why did Donald Trump decide last Friday to temporarily ban immigration from seven Muslim-majority countries and suspend all refugee admissions for 120 days? 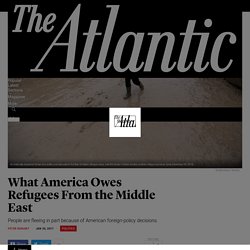 It all goes back to the war in Iraq. For the last few years, the establishment conservative answer for why America lost the Iraq War has been: Barack Obama. George W. Bush’s “surge” had belatedly won the war, the argument goes, until Obama withdrew U.S. troops, thus allowing the rise of ISIS. During the 2016 campaign, this storyline allowed the establishment candidates—Jeb Bush, Marco Rubio, Scott Walker, Chris Christie—to blame Iraq on the Democrats and avoid challenging Bush’s decision to launch the war in the first place. Rita Dove: “The first thing that goes when a government becomes a tyranny are words” There are few writers worthy of such high distinction, but to read Rita Dove is to encounter the transformative. 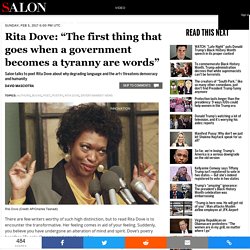 Her feeling comes in aid of your feeling. Suddenly, you believe you have undergone an alteration of mind and spirit. Trump Muslim Ban Executive Order Violated Executive Order About Executive Orders. There’s not a lot that’s funny about President Trump’s January 27 executive order temporarily banning immigrants and refugees from seven majority Muslim countries. Covering Trump the Reuters Way. Refugees are already vigorously vetted. I know because I vetted them. Syrian children walk around the camp grounds during a sandstorm at a temporary refugee camp in the village of Ain Issa, Syria, on Nov. 10, 2016. (Delil Souleiman/AFP/Getty Images) Why Trump's Staff Is Lying - Bloomberg View. One of the most striking features of the early Trump administration has been its political uses of lying.

The big weekend story was the obviously false claim of Donald Trump’s press secretary, Sean Spicer, that Trump pulled in the largest inauguration crowds in American history. Welcome to the Obama Foundation. Trump talks about himself, complains about media at first official event. A day to celebrate our power: The Women’s March provides the first moments of solidarity and happiness since Trump’s election. WASHINGTON — Donald Trump is president. Central Mass. residents turn out in numbers to send Trump a message. An Obama Staffer’s Parting Note to Progressives. For eight years I had the indescribable honor of serving in President Obama’s White House, most recently as Special Assistant to the President & Director of Rapid Response. She’s 54, white, rural and a lifelong Republican. Why is she protesting Donald Trump? Throw Sand in the Gears of Everything.