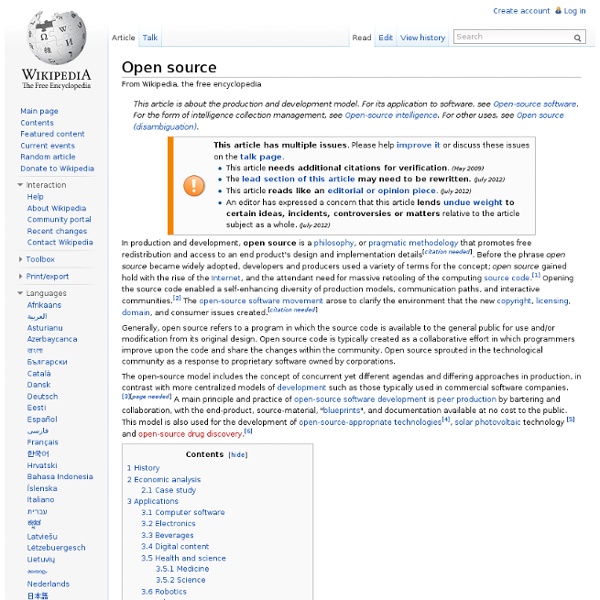 In production and development, open source as a development model promotes a) universal access via free license to a product's design or blueprint, and b) universal redistribution of that design or blueprint, including subsequent improvements to it by anyone.[1][2] Researchers view open source as a specific case of the greater pattern of Open Collaboration, "any system of innovation or production that relies on goal-oriented yet loosely coordinated participants, who interact to create a product (or service) of economic value, which they make available to contributors and non-contributors alike".[3] Before the phrase open source became widely adopted, developers and producers used a variety of other terms. Open source gained hold with the rise of the Internet, and the attendant need for massive retooling of the computing source code.[4][page needed] Opening the source code enabled a self-enhancing diversity of production models, communication paths, and interactive communities.

API In computer programming, an application programming interface (API) specifies how some software components should interact with each other. Detailed explanation[edit] API in procedural languages[edit] In most procedural languages, an API specifies a set of functions or routines that accomplish a specific task or are allowed to interact with a specific software component. List of Linux distributions Timeline of the development of various Linux distributions This page provides general information about notable Linux distributions in the form of a categorized list. Distributions are organized into sections by the major distribution they are based on, or the package management system they are based around.

Category:Creative Commons The Creative Commons (CC) is a non-profit organization devoted to expanding the range of creative work available for others legally to build upon and share. See Creative Commons Subcategories This category has the following 3 subcategories, out of 3 total. Pages in category "Creative Commons" The following 29 pages are in this category, out of 29 total. Ten leading platforms for creating online communities Creating online communities of customers and workers has been one of the hotter topics in business and technology this year. Whether you're on the business side, in IT, or are just trying to build virtual teams around shared goals, online communities are rapidly becoming a popular way to organize people and accomplish work in a highly collaborative manner. Learning how to design an effective community is something we’re all going have to get better at in coming years.It's beginning to be understood that communities aren't just for socializing but for getting things done. The open source world has been using vast collaborative online communities to develop complex software products successfully for nigh unto a decade.

Health Care Health care (or healthcare) is the diagnosis, treatment, and prevention of disease, illness, injury, and other physical and mental impairments in humans. Health care is delivered by practitioners in allied health, dentistry, midwifery-obstetrics , medicine, nursing, optometry, pharmacy and other care providers. It refers to the work done in providing primary care, secondary care, and tertiary care, as well as in public health. Access to health care varies across countries, groups, and individuals, largely influenced by social and economic conditions as well as the health policies in place. Countries and jurisdictions have different policies and plans in relation to the personal and population-based health care goals within their societies. Health care systems are organizations established to meet the health needs of target populations.

Big data Visualization of daily Wikipedia edits created by IBM. At multiple terabytes in size, the text and images of Wikipedia are an example of big data. Growth of and Digitization of Global Information Storage Capacity Source Big data is a broad term for data sets so large or complex that traditional data processing applications are inadequate. Challenges include analysis, capture, curation, search, sharing, storage, transfer, visualization, and information privacy. Open standard An open standard is a standard that is publicly available and has various rights to use associated with it, and may also have various properties of how it was designed (e.g. open process). There is no single definition and interpretations vary with usage. The terms "open" and "standard" have a wide range of meanings associated with their usage. There are a number of definitions of open standards which emphasize different aspects of openness, including of the resulting specification, the openness of the drafting process, and the ownership of rights in the standard. The term "standard" is sometimes restricted to technologies approved by formalized committees that are open to participation by all interested parties and operate on a consensus basis. Many definitions of the term "standard" permit patent holders to impose "reasonable and non-discriminatory licensing" royalty fees and other licensing terms on implementers and/or users of the standard.

Community development Communities taking collective action to solve common problems The United Nations defines community development as "a process where community members come together to take collective action and generate solutions to common problems. Law "Legal concept" redirects here. Lady Justice, a symbol of justice. She is depicted as a goddess equipped with three items: a sword, symbolising the coercive power of a court; scales, representing an objective standard by which competing claims are weighed; and a blindfold indicating that justice should be impartial and meted out objectively, without fear or favor and regardless of money, wealth, power or identity.[1] Law is a term which does not have a universally accepted definition,[2] but one definition is that law is a system of rules and guidelines which are enforced through social institutions to govern behaviour.[3] Laws can be made by legislatures through legislation (resulting in statutes), the executive through decrees and regulations, or judges through binding precedents (normally in common law jurisdictions). Private individuals can create legally binding contracts, including (in some jurisdictions) arbitration agreements that exclude the normal court process.

Data center An operation engineer overseeing a network operations control room of a data center A data center is a facility used to house computer systems and associated components, such as telecommunications and storage systems. It generally includes redundant or backup power supplies, redundant data communications connections, environmental controls (e.g., air conditioning, fire suppression) and various security devices. Large data centers are industrial scale operations using as much electricity as a small town[1] and sometimes are a significant source of air pollution in the form of diesel exhaust.[2] History[edit]

Search engine indexing Popular engines focus on the full-text indexing of online, natural language documents.[1] Media types such as video and audio[2] and graphics[3] are also searchable. Meta search engines reuse the indices of other services and do not store a local index, whereas cache-based search engines permanently store the index along with the corpus. Unlike full-text indices, partial-text services restrict the depth indexed to reduce index size. Evaluation Evaluation is often used to characterize to Only on, Rated, Created by, Exclusively on, Only from, Only at, Get it at, Designed for, Written by, Directed by, Produced by, Here on, Headquartered in, Located in, Do not, Available for, Available at and Has been. Definition[edit] Evaluation is the structured interpretation and giving of meaning to predicted or actual impacts of proposals or results. It looks at original objectives, and at what is either predicted or what was accomplished and how it was accomplished. So evaluation can be formative, that is taking place during the development of a concept or proposal, project or organization, with the intention of improving the value or effectiveness of the proposal, project, or organisation. It can also be assumptive, drawing lessons from a completed action or project or an organisation at a later point in time or circumstance.

open source: A movement in the software industry that makes programs available along with the source code used to create them so that others can inspect and modify how programs work. Changes to source code are shared with the community at large. Found in: Hurwitz, J., Nugent, A., Halper, F. & Kaufman, M. (2013) Big Data For Dummies. Hoboken, New Jersey, United States of America: For Dummies. ISBN: 9781118504222. by raviii Jan 1