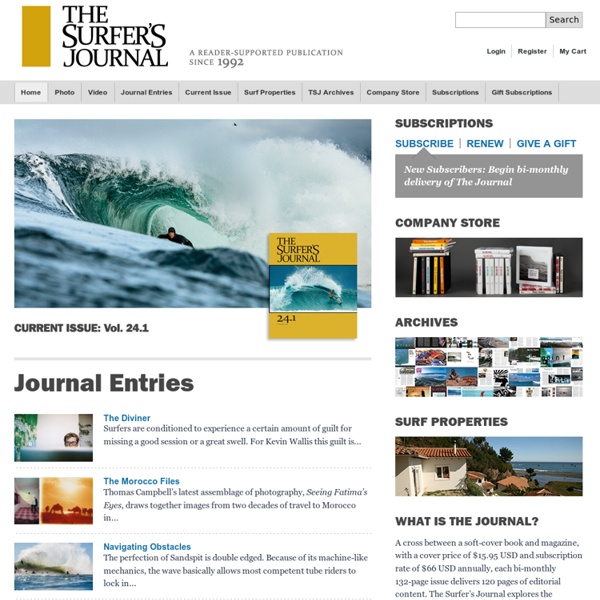 Port Magazine - the magazine for men Brain Pickings The Free Malibu Beach Live Surf Camera and daily Surf Report We at Swellmagnet.com take great pride in our site and will do our best to keep all off the surf reports and live surf cameras up and running around the clock. Flaneur Magazine | Blog »Rome is so boring, Rome is so dry.« Architectural performance group LAC, ATI and Stalker believe the answer to Rome’s future is the transformation of the ancient ruin Largo Argentina (located on Corso Vittorio Emanuele II) into a lake. Let the Romans swim! Let Romans touch their history instead of viewing it from afar! After several brainstorming sessions (scuba diving gear, crabs and safety floats being mentioned) Flaneur and the performers/architects met by the ruin armed with flyers, posters, empty vessels for collecting water and a model of the ruin-turned-lake including live gold fish. Through skills of persuasion we got passer-byers to sign petitions noting down how much water they are willing to donate, then as a symbolic start to the controversial transformation every petitioner had to take water from a fountain and pour it into the ruin. Some concerns arose: what would happen to the cat population home among the ruins and wouldn’t the water be harmful to the ruins?

Tara Gentile: You bring the passion, I'll show you the profit | Creative Business Coach ushering in the New Economy Fishtales - Follow The Fish Positive Club | Find motivational stories – Inspirational Stories for positive thinking Riding the Waves of Personal Development ESPN Surfing: Surfing news, event coverage, features, interviews, photos and videos VAfter a stumble in Round 2 of the Quiksilver Pro Australia, John John Florence didn't start his 2014 campaign the way he'd hoped, so we probed him about Slater, the ASP and PipelineVWalk into a surf shop this year and you might find it a little more interesting. Thanks to a whole host of new products and companies, things are looking a lot brighter.VAs the ASP World Tour undergoes an ambitious restructuring, the first event of the year, the Quiksilver Pro, is here. And all eyes are on the tour organizers instead of the pros. VWith more events in better locations, an infusion of significantly more prize money, and an extremely hungry group of women, the 2014 ASP Women's World Tour is poised to take the sport to an entirely new level. <a target="_blank" href=" Feedback Management</a><br /><a target="_blank" href=" Software</a><br />

Joe Nolan's Insomnia Halloween Rising For this latest spooky October post, I’ve grown a little bit impatient with the month and I want to cut to the chase. Here’s a nice little primer on the Celtic roots of the Halloween holiday and its evolution through the ages to the seemingly silly, scary celebration we know today. Do the souls of the… Read More » Loving the Alien Another spooky October post, this one examines the horrors that can happen during a close encounter with an alien. Cartoon Kubrick Casting about for another spooky October post, this one didn’t take long. Kiss This This scary October post recalls a subject many of you likely find terrifying: the career of Nicolas Cage. Blind Faith: Revelation This year marks the the 45th anniversary of the debut of one the first supergroups: Blind Faith. New Who From The Who Archive at Trinifold While we’ll never settle the Beatles/Stones question it’s easy to forget the greatness that was The Who. I, Madman Celebrating Ed Wood The Kinks at 50 Monster Maker