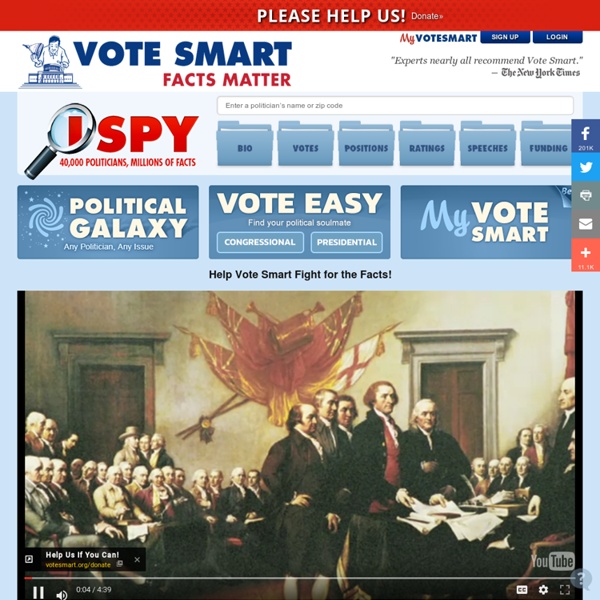 Jeb Bush Owes President Obama A Warm Kiss During the third GOP presidential debate on Wednesday night, former Florida Gov. Jeb Bush made a bold bet. “You find a Democrat that’s for cutting taxes, cutting spending $10, I’ll give him a warm kiss,” Bush said. Unfortunately for Bush, spending under President Barack Obama has decreased and is on track to reach the lowest level in more than 50 years by 2023. U.S. Presidents The Presidents of the United States Keshif (keşif) means discovery / exploration in Turkish. 44Presidents of the United StatesShow All

How to Ask Candidates Questions that Make a Difference by Fran Korten Tips for spreading your ideas without getting the runaround. posted Feb 24, 2012 The Occupy movement has changed the political conversation. But will it make a difference in what politicians actually do? This Man Is Not a Wonk: Why Marco Rubio Is Just Another Intellectual Fraud After spending most of the past few months either kowtowing to Donald Trump or forestalling complete anarchy in the House of Representatives, Republicans now find themselves on the verge of what they hope will be a much better position. Former vice presidential nominee Paul Ryan is the new Speaker of the House and Senator Marco Rubio seems poised to overtake Jeb Bush as the establishment’s favored candidate. The adults, some elite Republicans hope, will soon be back in charge.

Geolibertarianism: Universal Basic Income Derived from Commons Rent - Policy Brainstorming - The Something to Consider Forum Here's my way-out-there policy proposal, which combines a Georgist take on land ownership with the idea of a Universal Basic Income. This is known as geolibertarianism1, and it's a pretty compelling philosophy to me. What do you folks think? Georgism, or The Commons as Communal Property In my opinion, the traditional attitude of land as marketable private property is flawed. CQ Roll Call Site Will Help Users Contact Legislators There are Web sites that cover the actions and inactions of Congress. And there are Web sites that let voters contact their members of Congress and comment. CQ Roll Call wants to bridge the two. This week, the media company is revamping one of its Web sites, Congress.org, with an eye toward what one of its executives, Peter Anthony, calls “informed action.”

“Bush Doctrine” And Never Ending “War On Terror” Supported By Every Single Political Candidate Millions of Americans are tuning in this election cycle, to watch the politicians debate about how they will oppress us just a little bit less than the next guy. The candidates may seem to disagree on some issues, but when it comes to war, all of them are in agreement. Every candidate has promised to continue the wars that were started in the Bush and Obama eras, and they all refuse to even question the very premise of these conflicts, the Bush Doctrine and the war on terror. After 9/11, the Bush administration put forward a philosophy of pre-emptive war that has infected American politics ever since and kept the country in a constant state of war. The “war on terror” was basically an excuse for the US government to go to war whenever they wanted to, and both the mainstream media and the American public have accepted this mentality ever since, although some on the left waited for Obama to get into office before they began openly supporting pre-emptive war.

Advocate Libertarian Philosophy with This One Trick! (It's the Socratic Method) Gage Skidmore via Foter.com / CC BY-SAEven before last weekend's big Libertarian Party National Convention in Orlando, Reason has been making note that the horrible general election reality of Hillary Clinton vs. Donald Trump has prompted people and the media to take a closer look at the most prominent third party in the United States. This naturally puts libertarians (both within and independent of the party) in the position of explaining the libertarian mindset to people who don't really think too much about it or are exposed only to stories dismissing it as craziness. And obviously there are people who are very politically invested in making sure libertarians are seen as total nutters and unserious, holding an untenable philosophy that only crazy or selfish people would believe in. But sometimes it doesn't help when some libertarians attempt to argue from an assumption that all people are operating from the same mindset or values of liberty. Read White's questions here.

Federal Election Commission - Disclosure Data Catalog Welcome to data.fec.gov. We're building data files that will allow you to download campaign finance information in ways that we hope are most useful for you. We'll be moving the data we've always posted on our ftp server to this new location with these new formats and RSS capabilities. Ben Carson: Egyptian pyramids were grain stores, not pharaohs' tombs Egypt’s pyramids were built by the biblical Joseph to store grain and were not, as archaeologists believe, tombs for pharaohs, Republican presidential hopeful Ben Carson has said. The retired neurosurgeon, who is seeking his party’s nomination for the White House, made these remarks in a 1998 address at Andrews University, a school associated with the Seventh-day Adventist Church, to which he belongs, in a video posted on Buzzfeed on Wednesday. The church is a conservative evangelical Christian one.

Moral Outrage Is Self-Serving, Say Psychologists akg-images/NewscomWhen people publicly rage about perceived injustices that don't affect them personally, we tend to assume this expression is rooted in altruism—a "disinterested and selfless concern for the well-being of others." But new research suggests that professing such third-party concern—what social scientists refer to as "moral outrage"—is often a function of self-interest, wielded to assuage feelings of personal culpability for societal harms or reinforce (to the self and others) one's own status as a Very Good Person. Outrage expressed "on behalf of the victim of [a perceived] moral violation" is often thought of as "a prosocial emotion" rooted in "a desire to restore justice by fighting on behalf of the victimized," explain Bowdoin psychology professor Zachary Rothschild and University of Southern Mississippi psychology professor Lucas A. Keefer in the latest edition of Motivation and Emotion.

ALERT: Republicans Poised to Make It Easier For Loan Sharks to Rip Off US Troops In public, the Republican Party fiercely defends the military and hold our troops up on a golden pedestal, as they should. But when it comes to legislation, it’s clear that the GOP cares as little for our veterans as they do for any other part of American society that doesn’t donate millions to their re-election campaigns. The National Defense Authorization Act, which authorizes funding for the military’s 2016 budget, has a little clause slipped in at the end, which inserts a year-long delay for any laws that would protect military servicemen from predatory lending agencies, Wall Street’s army of payday loan businesses and other such shameless extortionists who have the gall to charge triple digit interest rates. Such heartless criminals make one understand why usury used to be a sin. Why do we spend so many billions on national defense every year if our soldiers are so grossly underpaid they must take out these loans in the first place? Related

Did the U.S. Army Distribute Smallpox Blankets to Indians? Fabrication and Falsification in Ward Churchill's Genocide Rhetoric Thomas Brown E-mail: browntf@hal.lamar.edu Abstract In this analysis of the genocide rhetoric employed over the years by Ward Churchill, an ethnic studies professor at the University of Colorado, a "distressing" conclusion is reached: Churchill has habitually committed multiple counts of research misconduct—specifically, fabrication and falsification.