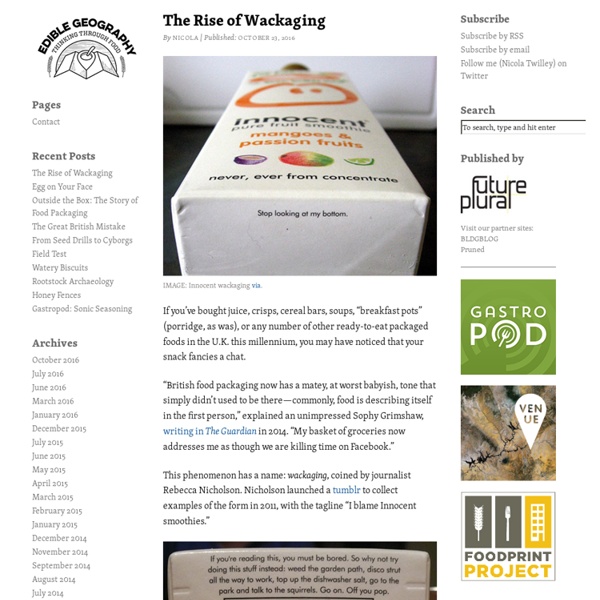 IMAGE: A block of Thompson Lake Ice, hauled onto the surface with tongs. All photographs by Nicola Twilley. In 1805, a twenty-three year-old Bostonian called Frederic Tudor launched a new industry: the international frozen-water trade. Over the next fifty years, he and the men he worked with developed specialised ice harvesting tools, a global network of thermally engineered ice houses, and a business model that cleverly leveraged ballast-less ships, off-season farmers, and overheated Englishmen abroad. By the turn of the century, the industry employed 90,000 people and was worth $220 million in today’s terms. By 1930, it had disappeared, almost without trace, replaced by an artificial cryosphere of cold storage warehouses and domestic refrigerators.

Emergent Urbanism, or ‘bottom-up planning’ I was asked to write an article around ‘bottom-up planning’ by Architectural Review Australia a while ago. It was published in the last issue, and I’m re-posting here. ‘Bottom-up’ is hardly the most elegant phrase, but I suspect you know what I mean. Either way, I re-cast it in the article as ‘emergent urbanism’ which captured a little more of the non-planning approaches I was interested in (note also the blog of same name, which I didn’t know about beforehand). It partly concerns increased transparency over the urban planning process but also, and perhaps more interestingly, how citizens might be able to proactively engage in the creation of their cities.

BIM - Mission The mission of the (B)IM Project is to make theatre accessible in Lebanon by performing for free, in site -specific locations across Lebanon. The (B)IM Project uses free productions and collaborations with artists from around the globe to cross divisions between local groups within Lebanon and boundaries between Lebanon and the international community. We devise and adapt stories rooted in the culture, history and literature of Lebanon. All productions are in colloquial Arabic.

open letter regarding growing food… « oakparkhatesveggies ed note: before you read the letter, i want to link to a petition that someone started at change.org. many people seem to be coming here from other sources, and since they do not follow the blog, they don’t know where to find it. also, i wrote on another post that i would like this letter to be used as you see fit- as a template for your own letter, as a jumping-off point for discussions/letters to the editor/local debates/anything else you can think of to get people talking about these issues. in addition, you have my full permission to print and re-print all or part of this letter, so please feel free to do with it whatever you think will be the most useful. you are welcome to adapt it as necessary. thank you for your support. -julie Dear Sir/Madam:

Democratic Republic of the Congo Located in Central Africa, the Democratic Republic of the Congo (DRC) is the continent’s second largest country, and the largest in sub-Saharan Africa. Despite being abundant in water, minerals and other natural resources, it is one of the world’s poorest and least developed nations. The extreme poverty that affects more than half the population is the legacy of years of violence, upheaval and instability. The DRC’s recent history has been marred by the plundering of resources and by violence. 40 maps that explain the world By Max Fisher By Max Fisher August 12, 2013 Maps can be a remarkably powerful tool for understanding the world and how it works, but they show only what you ask them to. So when we saw a post sweeping the Web titled "40 maps they didn't teach you in school," one of which happens to be a WorldViews original, I thought we might be able to contribute our own collection. Some of these are pretty nerdy, but I think they're no less fascinating and easily understandable. A majority are original to this blog, with others from a variety of sources.

Resources Milkwood: homesteading skills for city & country Awesome homesteading skills for city & country. We keep it simple, organic and deliciously real… Skip to content The issue - Global Food Security The world is facing a potential crisis in terms of food security. The challenge is to provide the world’s growing population with a sustainable, secure supply of safe, nutritious, and affordable high-quality food using less land, with lower inputs, and in the context of global climate change, other environmental changes and declining resources. Q&As Commonly asked questions about food security Book Chapters Sam Harris has contributed chapters to the following books: What should we be worried about? That is the question John Brockman, publisher of Edge.org ("The world's smartest website"—The Guardian), posed to the planet's most influential minds.