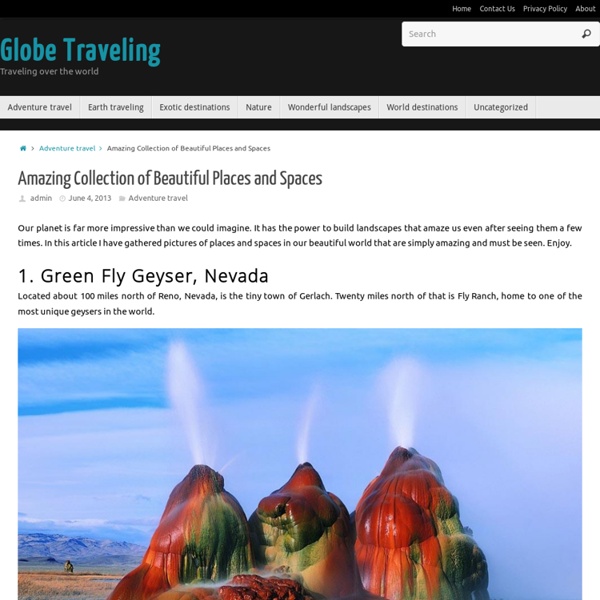 Our planet is far more impressive than we could imagine. It has the power to build landscapes that amaze us even after seeing them a few times. In this article I have gathered pictures of places and spaces in our beautiful world that are simply amazing and must be seen. Enjoy. 1. Green Fly Geyser, Nevada Located about 100 miles north of Reno, Nevada, is the tiny town of Gerlach. The most striking aspect of the Fly Geyser is its vibrant colors, which are caused by thermophilic algae. 2. The Ice Castles in Silverthorne are man-made ice formations created by Utah’s Brent Christensen. 3. This waterfall is very famous in Tuscany because is an open-air free hot spring. The waters of Saturnia Therme are sulphureous-carbonic-sulphate-bicarbonate-alkaline. 4. Neuschwanstein Castle is a 19th-century Romanesque Revival palace on a rugged hill above the village of Hohenschwangau near Füssen in southwest Bavaria, Germany. 5. The Sagano Bamboo Forest is one of Japan’s national treasures. 6. 7. 8. 9.

The 33 most beautiful abandoned places in the World 1. Christ of the Abyss, San Fruttuoso, Italy Via: en.www.lensart.ru 2. Kolmanskop, Namib Desert The Land of Tulips Tulip fields, wind turbines and canal, Holland. Photo by: Anna Paulowna There are reportedly 3,000 varieties of tulips. There is a Dutch organization that maintains the list of registered tulip varieties. Photo by: unknown

Deadly lake turns animals into statues (Images: Nick Brandt) ACCORDING to Dante, the Styx is not just a river but a vast, deathly swamp filling the entire fifth circle of hell. Perhaps the staff of New Scientist will see it when our time comes but, until then, Lake Natron in northern Tanzania does a pretty good job of illustrating Dante's vision. Unless you are an alkaline tilapia (Alcolapia alcalica) – an extremophile fish adapted to the harsh conditions – it is not the best place to live. Temperatures in the lake can reach 60 °C, and its alkalinity is between pH 9 and pH 10.5.

Panoramic pictures and virtual tour of World - 360 Cities Welcome to Earth! It's a planet having an iron core, with two-thirds of its surface covered by water. Earth orbits a local star called the Sun, the light of which generates the food supply for all the millions of species of life on earth. The dominant species on Earth is the human being, and you're one of the six billion of them! Humans have iron in their blood, and their bodies are composed of two-thirds water, just like the planet they live on. 52 Places to Go in 2015 A revitalized city welcomes the world. Sure, Italy is rich with romantic cities like Florence, Venice and Rome — but its most vibrant might just be Milan. And this is the year for tourists to explore its charms, as it hosts the 2015 World Expo. Twenty million visitors are expected to visit the city for the Expo, a mammoth event that runs from May through October and involves more than 130 participating nations and organizations sponsoring more than 60 pavilions. The Expo’s theme focuses on food, nutrition and sustainability practices — a fitting choice for a city steeped in Italian culinary traditions.

5 Great Sites for Exploring Cities Around the Globe When Google launched its panoramic photomapping service back in 2007, it was the first time many netizens had the chance to explore a swathe of detailed street-level photos from their armchairs. In the U.S., Street View's rivals now include Microsoft's Silverlight-powered "Streetside" via Bing Maps and MapQuest's 360 View. Elsewhere in the world, other international sites offer rival photomapping for their particular part of the globe, even as the reach of Google's Street View steadily increases. We've picked our five favorite websites from around the world that offer extensive street level imagery from places as varied as Munich, Mae Hong Son, Moscow and Miskolc.

Ashikaga Flower Park, Japan The Japanese love flowers, and wisteria are among their favorites. Wisteria (known as fuji in Japan) is said to be one of the archipelago's most ancient noted flowering trees, even being described in the collected poems of the Man'yoshu (Collection of Ten Thousand Leaves). One of the best places to view fuji flowers is the Ashikaga Flower Park in Ashikaga City, Tochigi Prefecture. 30 Incredible Earth Pictures 1. The Blue Dragon by Steve Richards 2. Shore in Seychelles 3. Matterhorn Mountain, Switzerland Abandoned Russian tunnels where mind-bending patterns naturally cover every surface By Sara Malm Published: 15:56 GMT, 5 February 2014 | Updated: 18:18 GMT, 5 February 2014 Hundreds of feet below a Russian city is an abandoned salt mine which might as well be the inside of a rave. The walls are covered with psychedelic patterns, caused by the natural layers of mineral carnallite creating swirls throughout the coloured rock. Carnallite is used in the process of plant fertilisation, and is most often yellow to white or reddish, but can sometimes be blue or even completely colourless.

The ultimate sailing trips Pack your sea legs for island adventures aplenty in this whistlestop tour of the world's best sailing spots, taken from Lonely Planet's 1000 Ultimate Experiences. 1. British Virgin Islands What happens when steady trade winds meet an island-flecked channel with tame currents and hundreds of protected bays? Every mariner worth their sea salt sails there – hence the British Virgin Islands (BVIs) being a sailing fantasy land. There are more than 40 islands and hundreds of anchorages, all within sight of each other.