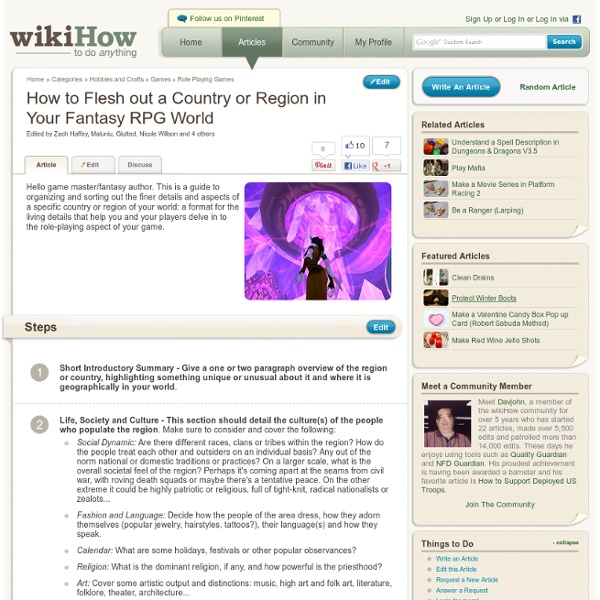 Edit Article Edited by Zach Haffey, Maluniu, Glutted, Nicole Willson and 5 others Hello game master/fantasy author. This is a guide to organizing and sorting out the finer details and aspects of a specific country or region of your world: a format for the living details that help you and your players delve in to the role-playing aspect of your game. Ad Steps 1Short Introductory Summary - Give a one or two paragraph overview of the region or country, highlighting something unique or unusual about it and where it is geographically in your world.Ad 2Life, Society and Culture - This section should detail the culture(s) of the people who populate the region. Tips And for other topics, your providing these details will inspire ideas for larger, overarching plot-lines and the workings of still other regions of your land. Warnings

The 100 Most Important Things To Know About Your Character (revised) Quote from original Author(Beth):This list came about when, one day while struggling to develop a character for an upcoming Hunter game, my lovely roommate Nikki looked at me and said something like, "Wouldn't it be cool to have a list of questions you could go through and answer while you were making characters, so you'd make sure to consider all sorts of different elements in their personality?" I agreed, and that very evening we sat down over hot chocolate and ramen noodles to whip up a list of 100 appearance-, history-, and personality-related questions (which seemed like a nice even number) to answer as a relatively easy yet still in-depth character building exercise. Later on, we went through the list again, took out the questions that sucked (because there were a lot of them) and replaced them with better ones. What you see before you is the result of that second revision. Just don't email us specifically to tell us how much we suck. That only results in cranky gamerchicks.

s Citadel: 5 Room Dungeon By JohnnFour - Pale Moon Why Do I Like 5 Room Dungeons? This format, or creation method, has a number of advantages: Any location. Though I call them 5 Room Dungeons, they actually apply to any location with five or so areas. Character Trait Chart Character Trait Chart and Personality Components It can sometimes be helpful to make a Trait Chart for each character. This is especially helpful during the early stages of character development, before the character becomes as real to you as your mother. There are several charts of this sort available, some extremely detailed and some containing only facts and figures. I've tried to make one that includes the most important traits to help you visualize your character, both physically and emotionally.

How to Write a Synopsis of Your Novel by Glen C. Strathy* To sell your novel, you may need to know how to write a synopsis, even if you are a pantser-type novelist who can write a whole novel without making an outline first. Agents and publishers will often ask for a synopsis along with sample chapters before they request a complete manuscript. The biggest mistake most people make when they try to write a synopsis for the first time is to create a bare bones plot summary, along the lines of “First this happens, then this happens, then this happens...”

Grid Paper PDFs Free Online Graph Paper / Grid Paper PDFs Downloadable and very printable, I find these PDFs extremely useful. Tip number one! Though I do return the correct header for a PDF, sometimes Explorer gets confused when downloading... So if you're running Windows, you may need to right-click a link and choose "Save link to disk". Tip number two!

Character meme fun! This is how I was procrastinating during the exam period. "Post-processual theory? ...After I've cleared out my hard drive, I think... ... ooh! What's this? Fiction Writing Mistakes Take advantage of our Instructor of the Month deal and get all of James Scott Bell’s bestselling books on writing (and more) for one heavily discounted price. Order Now >> The best fiction writers write like they’re in love—and edit like they’re in charge. First drafting should be a wild and wonderful ride, full of discovery, dreams and promises.

Writing Tips - Publishers list of phrases for writers to avoid We have all met people who have the extraordinary ability to talk in clichés: Y’know, not to beat around the bush or hedge your bet, this section is a must-read because it calls a spade a spade and in a nutshell leaves no stone unturned to pull the rug from under those off-the-cuff, old-hat bête noires called clichés. These are the people who’ve given the cliché its bad name. We all tend to use them, of course. Sometimes that familiar phrase is the neatest way of expressing yourself and most of us can, in a flash (cliché), unconsciously call up a few hundred of them to help us out in writing and conversation. But how aware are we of the irritation (or worse, sniggering) that the overuse of clichés can cause?

GM Advice: A Learning Mechanic I had a reader ask about the mini-game that appears in my D&D campaign. A few people have expressed interest in it, and I thought it might be worth a look. I don’t pretend this is clever or innovative. This is very much a system I cobbled together as I was groping around trying to simulate a character learning. Said Is Not a Four-Letter Word NOTESPart of the "Variety Is the Spice of Life, and I Need Some Tums" set of essays. For the others, see:Purple Fanfic's (total lack of) Majesty | Epithets: Fandom's Designated Hitters written December 2004 "Said" Is Not a Four-Letter Word by Arduinna Many people seem to be afraid to repeat the word "said" in dialogue tags -- the phrases that explain who's talking, and in what manner.