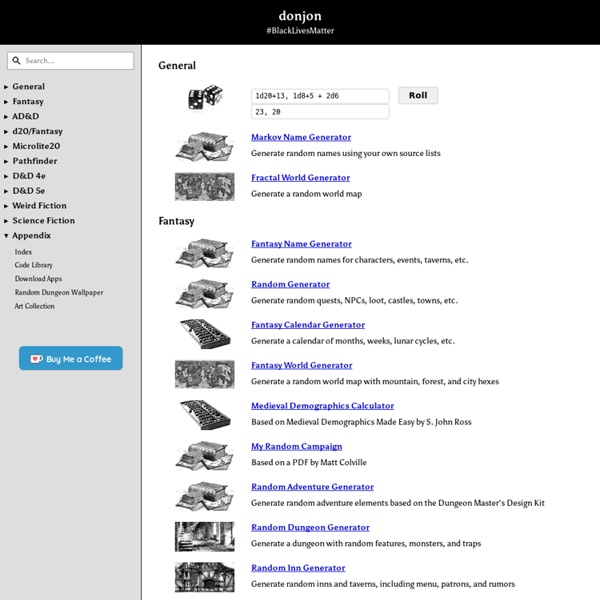 [Random Thursday] Party Time! « Dyson's Dodecahedron If there is anything that feels like a classic fantasy story, it is arriving in a town or city just in the midst or verge of a major festival. So what’s the party all about? Table 1 – Random Festivals (d12) Celebrating the anniversary of the end of a war.Religious celebration (table 2).Agricultural fair – showing off animals and foodstuffs.The Great Fast – a day or week when all the inhabitants fast and are quiet and reserved.Celebration of the beginning of the local calendar year.Celebration of the anniversary of a great heroic deed.Spontaneous celebration of an important marriage.Trade festival.Party to ward off bad luck and renew the good.Remembrance of a great tragedy.A major funeral.Contests of prowess – military, skill or magical.

Gary Gygax’s Whitebox OD&D House Rules At the beginning of our World Oranj Whitebox OD&D game I started picking through various common house rulings in order to put together my own initial set of house rules. My personal list is based on rules I use in Classic D&D games (currently, Labyrinth Lord) and also on rules I've read about but never tried (see the excellent house rule lists by Philotomy and Delta). During this exercise I paid special attention to Gary Gygax’s house rules, which I attempt to compile here.

My Best of series You can find all of my “Best” lists in broad categories here. The link to that page can also be found at the top right of my blog: My Best Of Series I also have them all on another page where they are listed in the chronological order in which I originally posted them. You can find that link at the top of my blog by first clicking on About and then scrolling down to Websites of the Year. Two thousand “Best” lists are a lot of best lists! Tabletop Games - Alchemy Ingredients - Character Sheet OSRIC™ - Follower Sheet OSRIC™ [Random Thursday] Lost Cities of the Fallen Empire « Dyson's Dodecahedron B4 - The Lost City Lost Cities, Fallen Empires, entire civilizations no longer in decline – but leaving us with nothing but the ruins of their former homes to explore. These are classic themes and settings for pulp adventures and well suited to any role playing game. One of the original D&D modules explores this very theme (B4 – the Lost City). In my campaign setting, there are many “lost cities”.

TSR & WotC Font FAQ TSR & WotC Font Usage FAQ This is a FAQ in that the question "What font did/do they use?" is frequently asked; it is (obviously) not a standard FAQ question & answer session. William Annin Middle School Who are you, what is your role and what class(es) do you teach Steven Isaccs, Teacher of 8th grade Video Game Design and Development. What versions of GameMaker do you use? Currently, GameMaker Studio. I've been teaching with GameMaker since version 4 :) Sangrolu: The Blood Lich The Blood Lich, or Sangrolu is truly an abomination; a merging of the lich and the vampire. Legends of the sangrolu's' creation abound in the tomes of long-dead sages, but most of them agree that the first sangrolu was a vampire who wanted to escape the bounds of the night and forever leave the dominion of Kanchelsis, the God of vampires. Sangrolu are created when a vampire creates a variant of the black potion used to turn a mortal wizard into a lich, and drinks it. (See Ecology, below) Vampires that imbibe this dark potion must still succeed a System Shock check, as must a mortal. However, failure does not indicate death, but rather an eternal curse of decay that can only be slowed by the ingestion of blood. Thus, there are two types of sangrolu, Broken and Whole.

[Random Thursday] Strange Stones « Dyson's Dodecahedron Menhir illustration by Philip Reeve Standing stones are an immediate fantasy hook because of most of our obsession over the megaliths such as Stonehenge. Doubly so for those of us who live in parts of the world where such things are not found (like us North Americans). Like this: Like Loading... Home PAX East Live Game: 2014 When last we left our heroes, they had defeated one of the most terrible foes the Realms had ever seen, and carved out a little space in the city of Waterdeep that they could call their own. Now a new opportunity… err… adventure beckons! Random Inn/Tavern Generator Current Settings (Because this is a set of separate images, to save the floorplans you should: press your "print screen" key (or your computer's equivalent) and then open your favorite image editor and paste the screenshot into a new image. Then crop the rest of the screen. Some word processors will also allow you to paste the screenshot and even crop it.