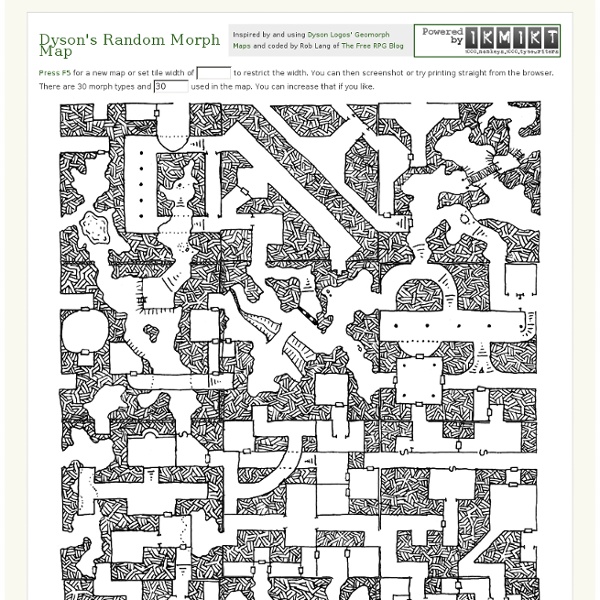 Inspired by and using Dyson Logos' Geomorph Maps and coded by Rob Lang of The Free RPG Blog Dyson's Random Morph Map Press F5 for a new map or set tile width of to restrict the width. You can then screenshot or try printing straight from the browser.

Paranoia: Whats it all about? What is Paranoia about? Paranoia is a roleplaying game with a difference. Where as other RPGs encourage players to work together towards a common goal, Paranoia encourages backstabbing, double-crossing and bare-faced lying. The back of the Paranoia rulebook describes the game as follows: Imagine a world designed by Kafka, Stalin, Orwell, Huxley, Sartre and the Marx Brothers... Paranoia is a roleplaying game set in a darkly humorous future. You play one of The Computer's elite agents. Paranoia: A lighthearted game of terror, death, bureaucracies, mad scientists, mutants, dangerous weapons, and insane robots, which encourages players to lie, to cheat, and backstab each other at every turn. Is that fun? Trust us. Suffice to say, Paranoia is fun. Alpha Complex This is where everybody lives. The Computer The Computer runs everything within Alpha Complex. Though deranged, The Computer believes it is doing the right thing. Clones The Computer doesn't make that kind of mistake. Mutations Secret Societies

crooked staff productions roleplaying aids Please note that this site and its contents are Copyright © Kristian Richards 2002 - 2011 <p>Subscribe to RSS headline updates from: <a href=" />Powered by FeedBurner</p> Hello and welcome to the CSP home page! It is the aim of this web-site to provide a wide variety of roleplaying aids for both the GM/DM and player alike. Within these pages you will find a number of files and images (spread over a few differing sections) all of which are completely free* to download. In some instances (such as with the adventures section) the downloads are compatible with the Dungeons & Dragons (3rd edition) role-playing game - though in most cases they should prove to be equally suitable for most types of role-playing / board games with little or no modification. For all the latest CSP news, updates, and even more free downloads be sure to check out... *However, a number of products are now for sale via RPGNow, DriveThruRPG, and lulu.

The 100 Most Important Things To Know About Your Character (revised) Quote from original Author(Beth):This list came about when, one day while struggling to develop a character for an upcoming Hunter game, my lovely roommate Nikki looked at me and said something like, "Wouldn't it be cool to have a list of questions you could go through and answer while you were making characters, so you'd make sure to consider all sorts of different elements in their personality?" I agreed, and that very evening we sat down over hot chocolate and ramen noodles to whip up a list of 100 appearance-, history-, and personality-related questions (which seemed like a nice even number) to answer as a relatively easy yet still in-depth character building exercise. Later on, we went through the list again, took out the questions that sucked (because there were a lot of them) and replaced them with better ones. In the more recent past, we've also found that answering those annoying online personality quizzes in-character can sometimes lead to interesting revelations. - Beth

Slack n Hash- Name Generators After much deliberation… goodbye. Sort of. For now. I've neglected this site for a good couple of years, and let's face it, the months leading up to that point weren't exactly stellar either. So, time to own up, lower the curtain on this enterprise and consider my next step. Phil Smith , May 2011

How to Flesh out a Country or Region in Your Fantasy RPG World Edit Article Edited by Zach Haffey, Maluniu, Glutted, Nicole Willson and 5 others Hello game master/fantasy author. Ad Steps 1Short Introductory Summary - Give a one or two paragraph overview of the region or country, highlighting something unique or unusual about it and where it is geographically in your world.Ad 2Life, Society and Culture - This section should detail the culture(s) of the people who populate the region. Tips And for other topics, your providing these details will inspire ideas for larger, overarching plot-lines and the workings of still other regions of your land. Warnings Creating a detailed campaign world from the ground up, even a country let alone a continent, is quite an undertaking.It is important that you do the geography and their respective biomes first before embarking on the making of the country's people, their infrastructure and their culture if you're up to making your country believable.

Roleplaying Tips for game masters for all role-playing systems The Mother Of All Character Questionnaires Use this list of questions to construct or add to your own characrer questionnaire. The questions cover different genres and types of details, so feel free to exclude or modify to suit your group. Questions are divided into broad categories. For brevity, I cut out most follow-up explanation type questions, such as "Why", "how come", and so on. Introduction Questions Give a two or three word description of yourself. Physical Traits How old are you? History Where is your homeland? Family Who were your parents? Relationships Do you have any close friends? Personality/Beliefs

Last Night on Earth: The Zombie Game Last Night on Earth: The Zombie Game is a survival horror board game that was first published in 2007. Players can play on the Hero team or as the Zombies. A modular board randomly determines the layout of the town at the start of each game and there are several different scenarios to play.[1] Seven supplements have been released. To achieve a horror movie feel, all of the art for the game is photographic and the game comes with a CD soundtrack of original music.[2] The game borrows from horror film stereotypes and zombie film plots. An example of Last Night on Earth: The Zombie Game gameplay. Before playing, the board is set up. Players are split into two teams, the Zombies and the Heroes. A Scenario then needs to be chosen, randomly or by vote. Each team has their own deck of cards. Gameplay is split into two turns, the Zombie Turn and the Hero Turn. Any Zombie in the same square as a Hero must now fight them. Either team wins by completing their Scenario Objective. Hero Pack 1 (2010)

Needles of Knitting +5: Using The Craft Skill To Its Best Advantage Back at the beginning of my career here at GDG, I wrote about the joys and benefits of making things with your own two hands, and I’ll be writing more about that in the future. In the mean time, how about some of that crafty goodness for your character? In the skill list of most pen-and-paper RPGs is the Craft skill. It may have a different name depending on the game, but it’s whatever roll you’d make to, well, make something. Aside from some obvious choices – Craft (alchemy) for potion brewers, Craft (blacksmithing) for characters who want to forge their own weapons and armor, Craft (bowyer/fletcher) for rangers making their own bows and arrows – the skill often gets ignored, and those precious skill points are spent on Perception and Diplomacy instead. For many, putting ranks in Craft may seem like a waste. Lots of good, that’s what. Your Character Should Never Be Bored As a geek, you clearly have hobbies and interests outside of your job. Crafts become habits for many people.