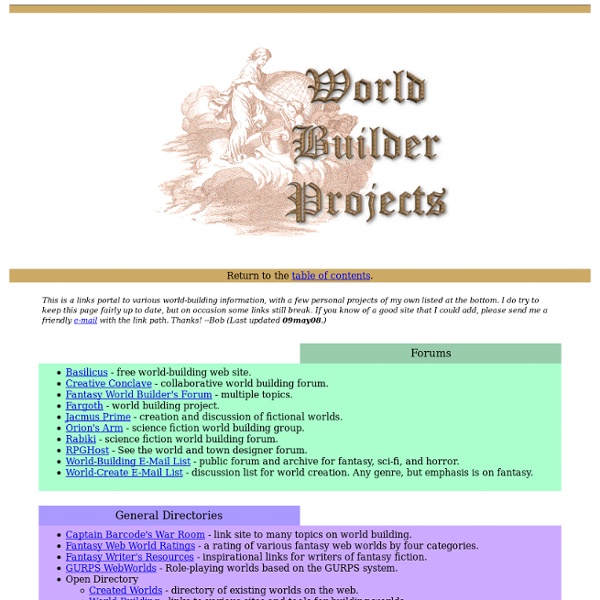 How to Flesh out a Country or Region in Your Fantasy RPG World Edit Article Edited by Zach Haffey, Maluniu, Glutted, Nicole Willson and 5 others Hello game master/fantasy author. Ad Steps 1Short Introductory Summary - Give a one or two paragraph overview of the region or country, highlighting something unique or unusual about it and where it is geographically in your world.Ad 2Life, Society and Culture - This section should detail the culture(s) of the people who populate the region. Tips And for other topics, your providing these details will inspire ideas for larger, overarching plot-lines and the workings of still other regions of your land. Warnings Creating a detailed campaign world from the ground up, even a country let alone a continent, is quite an undertaking.It is important that you do the geography and their respective biomes first before embarking on the making of the country's people, their infrastructure and their culture if you're up to making your country believable.

The 100 Most Important Things To Know About Your Character (revised) Quote from original Author(Beth):This list came about when, one day while struggling to develop a character for an upcoming Hunter game, my lovely roommate Nikki looked at me and said something like, "Wouldn't it be cool to have a list of questions you could go through and answer while you were making characters, so you'd make sure to consider all sorts of different elements in their personality?" I agreed, and that very evening we sat down over hot chocolate and ramen noodles to whip up a list of 100 appearance-, history-, and personality-related questions (which seemed like a nice even number) to answer as a relatively easy yet still in-depth character building exercise. Later on, we went through the list again, took out the questions that sucked (because there were a lot of them) and replaced them with better ones. In the more recent past, we've also found that answering those annoying online personality quizzes in-character can sometimes lead to interesting revelations. - Beth

crooked staff productions roleplaying aids Please note that this site and its contents are Copyright © Kristian Richards 2002 - 2011 <p>Subscribe to RSS headline updates from: <a href=" />Powered by FeedBurner</p> Hello and welcome to the CSP home page! It is the aim of this web-site to provide a wide variety of roleplaying aids for both the GM/DM and player alike. Within these pages you will find a number of files and images (spread over a few differing sections) all of which are completely free* to download. In some instances (such as with the adventures section) the downloads are compatible with the Dungeons & Dragons (3rd edition) role-playing game - though in most cases they should prove to be equally suitable for most types of role-playing / board games with little or no modification. For all the latest CSP news, updates, and even more free downloads be sure to check out... *However, a number of products are now for sale via RPGNow, DriveThruRPG, and lulu.

Last Night on Earth: The Zombie Game Last Night on Earth: The Zombie Game is a survival horror board game that was first published in 2007. Players can play on the Hero team or as the Zombies. A modular board randomly determines the layout of the town at the start of each game and there are several different scenarios to play.[1] Seven supplements have been released. To achieve a horror movie feel, all of the art for the game is photographic and the game comes with a CD soundtrack of original music.[2] The game borrows from horror film stereotypes and zombie film plots. An example of Last Night on Earth: The Zombie Game gameplay. Before playing, the board is set up. Players are split into two teams, the Zombies and the Heroes. A Scenario then needs to be chosen, randomly or by vote. Each team has their own deck of cards. Gameplay is split into two turns, the Zombie Turn and the Hero Turn. Any Zombie in the same square as a Hero must now fight them. Either team wins by completing their Scenario Objective. Hero Pack 1 (2010)

MonteCook.com Fifty More Adventure Ideas (for Dungeons and Dragons&) - Writers Corner:... Dec 13, 2006 (Updated Dec 20, 2006) Popular Products in Books From $2 From $5 The Bottom Line The ideas for this game are infinite. Enjoy. A veteran Dungeons and Dragons® player for many years, and not afraid to admit this, I have conceived Fifty More Adventure Ideas (for Dungeons and Dragons®), my expansion to the One Hundred Adventure Ideas on page 44 of The Dungeon Master’s® Guide, Core Rulebook II, v.3.5. 1. 5 NPCs That Won't Put Your Players to Sleep Are your NPCs drab and boring? Do they all speak with the same voice (yours) and use the same mannerisms (yours)? Do they exist only as plot hooks, sage advisors, and merchants? Then you, my friend, might want to consider spicing up your party’s social life with some three-dimensional NPCs that won’t soon be forgotten. Use this article as a source of quick inspiration when your players start to look drowsy. The Target Wherever this NPC goes, trouble follows. The Object of Desire This NPC could be a sultry maiden or a handsome hero who seems to be fond of one or more party members. The Look-Alike This is a cruel trick, but a fun one. The Crime Lord In the tradition of crime bosses everywhere, this NPC will be happy to help the party out – for a price. The Comic Relief Sometimes a dose of silliness is all you need to get your players active. One-sentence NPC generator To whip up some quick NPC ideas of your own, check out the one-sentence RPG generator at roleplaying Tips. Written by Janna

Dysons Random Morph Map Inspired by and using Dyson Logos' Geomorph Maps and coded by Rob Lang of The Free RPG Blog Dyson's Random Morph Map Press F5 for a new map or set tile width of to restrict the width. You can then screenshot or try printing straight from the browser. Paranoia: Whats it all about? What is Paranoia about? Paranoia is a roleplaying game with a difference. Where as other RPGs encourage players to work together towards a common goal, Paranoia encourages backstabbing, double-crossing and bare-faced lying. The back of the Paranoia rulebook describes the game as follows: Imagine a world designed by Kafka, Stalin, Orwell, Huxley, Sartre and the Marx Brothers... Paranoia is a roleplaying game set in a darkly humorous future. You play one of The Computer's elite agents. Paranoia: A lighthearted game of terror, death, bureaucracies, mad scientists, mutants, dangerous weapons, and insane robots, which encourages players to lie, to cheat, and backstab each other at every turn. Is that fun? Trust us. Suffice to say, Paranoia is fun. Alpha Complex This is where everybody lives. The Computer The Computer runs everything within Alpha Complex. Though deranged, The Computer believes it is doing the right thing. Clones The Computer doesn't make that kind of mistake. Mutations Secret Societies

Codpiece of Attention (3.5e Equipment) Why hello there, old chap. The tip of this strangely shaped codpiece is elaborately decorated with the weathered idiosyncracies of an imperious, moustached man of older years. The face is said to be the remaining visual effigy of the wizard eccentric who invented it. The codpiece of attention may be worn over any clothing. It does not take up a slot on the wearer's body, nor does it otherwise grant protection to or impede upon the wearer in any way. Three times per day as a standard action, the wearer may activate the codpiece's special ability. The codpiece's fascination effect is treated as a gaze attack. Prerequisites: CL 5th; Craft Wondrous Item; hypnotism, major image, ventriloquism; Market price 9,720 gp; 4,860 gp + 389 XP. Back to Main Page → 3.5e Homebrew → Equipment

Characters with Character: Random Personality Generator If you're enjoying the content here, check out our new site, Thoughtcrime Games. Thanks for visiting! If you're new here, you may want to subscribe to my RSS feed. Thanks for visiting! I don’t know about you but when I sit down for a one-shot game with a pregen character, I can’t always come up with a unique and interesting personality on the fly. Using the Generator is a snap. Motivation: What is it that really gets your character’s motor running? Instinct: What is your character’s first reaction to a threat (physical or otherwise)? Approach: What archetype is your character best known for being? Now just because every character in D&D is combat-capable does not necessarily make them all warrior-type personalities. Carrion, Tiefling Earth WardenMotivation 3 (Information); Instinct 4 (Protect Others); Approach 10 (Disciplined Commander) Though the city of Bael Turath stands in ruins, much of the Tiefling heritage lies buried ignobly around the Known World. Serious Skills Aquatic Adventures

The rpg-project -- Main Page Slack n Hash- Name Generators After much deliberation… goodbye. Sort of. For now. I've neglected this site for a good couple of years, and let's face it, the months leading up to that point weren't exactly stellar either. So, time to own up, lower the curtain on this enterprise and consider my next step. Phil Smith , May 2011 The Cube (game) Kokology is the study of kokoro (Japanese: 心) which in the aforementioned language means "mind" or "spirit". The series of Kokology books were created by Tadahiko Nagao and Isamu Saito,[1] a professor at Rissho and Waseda Universities in Japan and an author of a number of bestselling books regarding psychology and relationships. The television Series ran on Saturdays it was only aired in one city broadcast time 22:00 to 22:54 (54 minutes) Series Run: April 20, 1991 to March 21, 1992Country: Japan BroadcastingBroadcast: Yomiuri Television Production DepartmentProduction: IVS TV ProductionCast/s: Yamaguti Mie, Inferior soul, Izumiya Shigeru, Miwa Akihiro More The video games Soreike Kokology and Soreike Kokology 2 were released in 1992 and 1993 by "Tecmo" with English and Japanese releases for MAME,[3] Sony PlayStation, and Sega AM2. The Cube (game)[edit] The Cube is a Kokology game about self knowledge and is played by asking a person to imagine and describe a set of three to five objects.