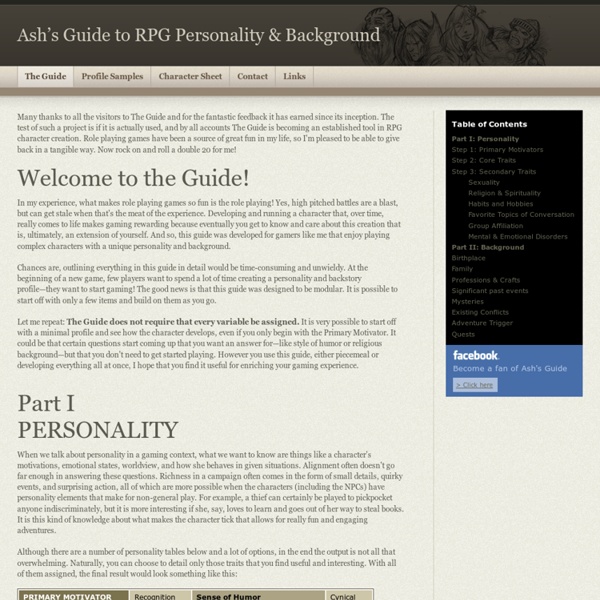 Many thanks to all the visitors to The Guide and for the fantastic feedback it has earned since its inception. The test of such a project is if it is actually used, and by all accounts The Guide is becoming an established tool in RPG character creation. Role playing games have been a source of great fun in my life, so I'm pleased to be able to give back in a tangible way. Now rock on and roll a double 20 for me! In my experience, what makes role playing games so fun is the role playing! Yes, high pitched battles are a blast, but can get stale when that's the meat of the experience.

Character Trait Chart Character Trait Chart and Personality Components It can sometimes be helpful to make a Trait Chart for each character. This is especially helpful during the early stages of character development, before the character becomes as real to you as your mother. There are several charts of this sort available, some extremely detailed and some containing only facts and figures. Fumble Chart (3.5e Variant Rule) - Dungeons and Dragons Wiki This is simply a chart designed to add a bit of variety to the player's possible plight in rolling a natural 1 during an attack. When a player rolls a natural 1 on a d20, it's a miss. However, to add a bit of drama to the game, have them roll a confirm miss or fumble. If they get a 2 or more on another d20 roll, the attack is a simple miss. If they roll another natural 1, roll on the fumble chart.

Roleplaying Tips for game masters for all role-playing systems The Mother Of All Character Questionnaires Use this list of questions to construct or add to your own characrer questionnaire. The questions cover different genres and types of details, so feel free to exclude or modify to suit your group. Questions are divided into broad categories. And similar questions and bunched into groups within their category. For brevity, I cut out most follow-up explanation type questions, such as "Why", "how come", and so on.

The Alexandrian - Misc Creations Over the course of several conversations spread across the past few weeks, I've been reminded of something that is rather easy to forget: Not everyone knows what I know. This has nothing to do with me being smarter than anybody else. It's just the result of a slow accumulation of random information and experience over the course of 20+ years of gaming. How to Create Good Personalities for Your Characters Edit Article Sample Character DescriptionsCreating Personalities for Your Own Characters Edited by Secretive, Julia Maureen, Flickety, Ben Rubenstein and 19 others The Welsh Piper » Random Noble Houses Backgrounds of the rich and famous… Work on an upcoming fantasy setting has me thinking about nobles. There are a few noble houses I want to flesh out, and since I’m on an Inspiration Pad Pro kick, I thought a set of carefully crafted random tables was in order. I’ve incorporated a few assumptions into these tables (which is code for “I reduced the scope so I could meet my deadline”).

The Alignment System A creature's general moral and personal attitudes are represented by its alignment: lawful good, neutral good, chaotic good, lawful neutral, neutral, chaotic neutral, lawful evil, neutral evil, or chaotic evil. Alignment is a tool for developing your character's identity. It is not a straitjacket for restricting your character. Each alignment represents a broad range of personality types or personal philosophies, so two characters of the same alignment can still be quite different from each other. In addition, few people are completely consistent. Good vs.

GM Advice: A Learning Mechanic I had a reader ask about the mini-game that appears in my D&D campaign. A few people have expressed interest in it, and I thought it might be worth a look. I don’t pretend this is clever or innovative. Body Language Basics - Syncrat Publishing Throughout history it has been an advantage if an individual can read body language. Body language helps in everyday life from closing a business deal or trusting someone with your life, to recognising when someone is upset. Body language is the art of making an educated guess at a person’s feelings or intentions based on their posture, movement and positioning. Skill Challenge #7: Walk Through Dreams. If you're enjoying the content here, check out our new site, Thoughtcrime Games. Thanks for visiting! If you're new here, you may want to subscribe to my RSS feed. Thanks for visiting! Scenario: You sleep and dream.

1001 Common Structures in a Village/Town/City This is the revamped version of the old thread, started with some sort of planning. Ever had trouble thinking of random buildings for an urban setting? Ever just drawn some rectangular shapes and said 'OK, that's a building' without bothering to explain it? Ever wonder just what sorts of structures a particular setting has? Ever wondered what sort of mischief you could turn up in a city? 25 Things You Should Know About Worldbuilding Worldbuilding is one of those topics that bakes my noodle every time my brain chooses to dwell on it. I have a whole bucket full of opinions, many of them in stark disagreement with one another. So, this list below should never at any time be taken as “25 Exhaustive Universal Truths About Worldbuilding,” but rather be regarded as, “25 Things Chuck Wendig Thinks About Worldbuilding At This Exact Moment In Time, Oh, Wait, Some Of Them Just Changed.” Kay?

Characters - The Attributes of Age Characters: The Attributes of Age By Melanie Anne Phillips Introduction Writers tend to create characters that are more or less the same age as themselves. s Citadel: 100 Unique Town/City Properties By Redgre I have created this table plus, as a fantasy RPG resource. The idea is to assist in quickly mapping out an area of the adventure and be able to tell something unique about each populated location. Some of the following entries are reliant on location, others are not. I have created enough entries that you may want to use percentile dice to randomly determine each location.