Roleplaying Tips for game masters for all role-playing systems 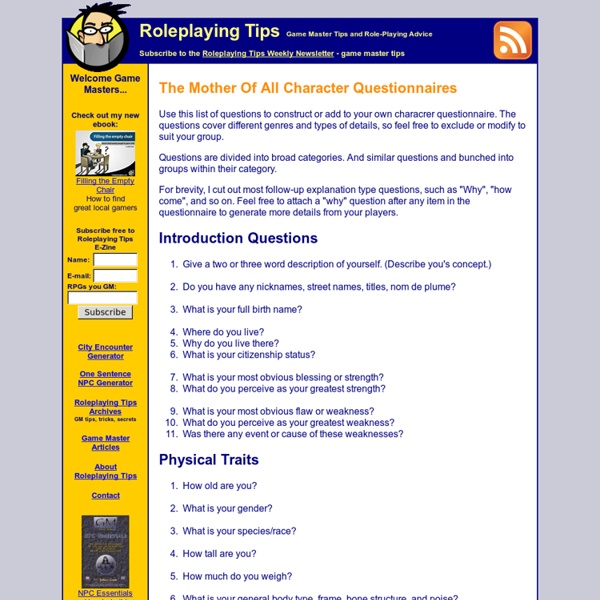 The Mother Of All Character Questionnaires Use this list of questions to construct or add to your own characrer questionnaire. The questions cover different genres and types of details, so feel free to exclude or modify to suit your group. Questions are divided into broad categories. And similar questions and bunched into groups within their category. For brevity, I cut out most follow-up explanation type questions, such as "Why", "how come", and so on. Introduction Questions Give a two or three word description of yourself. Physical Traits How old are you? History Where is your homeland? Family Who were your parents? Relationships Do you have any close friends? Personality/Beliefs

Lets Code ... an MMO! Introduction My name is Michael Goodfellow. The first time I touched a computer was probably in 1971, and I immediately wanted to know how to program it. I worked in the software industry from 1975 to 2005, when I retired on disability. And yes, I still write code. Who knows why? Characters with Character: Random Personality Generator If you're enjoying the content here, check out our new site, Thoughtcrime Games. Thanks for visiting! If you're new here, you may want to subscribe to my RSS feed. Thanks for visiting! I don’t know about you but when I sit down for a one-shot game with a pregen character, I can’t always come up with a unique and interesting personality on the fly. Sometimes the class, race and skill combo strikes a chord, but usually it’s just numbers.

The Alignment System A creature's general moral and personal attitudes are represented by its alignment: lawful good, neutral good, chaotic good, lawful neutral, neutral, chaotic neutral, lawful evil, neutral evil, or chaotic evil. Alignment is a tool for developing your character's identity. It is not a straitjacket for restricting your character. Each alignment represents a broad range of personality types or personal philosophies, so two characters of the same alignment can still be quite different from each other. In addition, few people are completely consistent. Good vs.

Character Survey Since it's inception, the character survey has served over one hundred thousand visitors in developing fictional characters for novels, screenplays, role-playing games, revolutionary war reenactments, medieval reenactments, and more. Like you, dear reader, these visitors were looking for a jumping-off point to develop a unique and memorable persona. To move the survey forward, to deepen it, to make it stronger, I'm working on a new and enhanced version of the survey. The best thing about the character survey is that it is a very simple, yet profound, tool for really getting inside the essence of a person. If you'd like a FREE copy of the enhanced character survey, answer the ONE question on this survey (here's the link), and I'll send it to you electronically when it's ready! No other obligations.

The Most Important Algorithms (Survey) After a long discussion with some of my RISC colleagues about what the 5 most important algorithms on the world are, we couldn't reach a consensus on this question. So I suggested to perform a little survey. The criterion for suggestions was that these algorithms should be widely used. Further we restrict ourselves to the fields of computer science and mathematics. As I expected the number of different suggestions is close to 5 * (no. of participants) Fifty More Adventure Ideas (for Dungeons and Dragons&) - Writers Corner:... Dec 13, 2006 (Updated Dec 20, 2006) Popular Products in Books From $2 From $5

1001 Common Structures in a Village/Town/City This is the revamped version of the old thread, started with some sort of planning. Ever had trouble thinking of random buildings for an urban setting? Ever just drawn some rectangular shapes and said 'OK, that's a building' without bothering to explain it? Ever wonder just what sorts of structures a particular setting has? Ever wondered what sort of mischief you could turn up in a city? The Universal Mary Sue Litmus Test Stuck with a case of massive writer's block? Has your muse gone on indefinite hiatus? Or are you just bored? Check out the random generators - with a click of a button, you can create characters, names, settings, items, and more for your creative works! The Universal Mary Sue Litmus Test How to use this test: First, if you're unsure of what a Mary Sue is, please read this page.

Beginning Game Development: Part I - Introduction &124; Coding4Fun... Part I – Introduction Welcome to the first article of an introductory series on game programming using the Microsoft .NET Framework and managed DirectX 9.0. This series as aimed at beginning programmers who are interested in developing a game for their own use with the .NET Framework and DirectX. The goal of this series is to have fun creating a game and learn game development and DirectX along the way.

5 NPCs That Won't Put Your Players to Sleep Are your NPCs drab and boring? Do they all speak with the same voice (yours) and use the same mannerisms (yours)? Do they exist only as plot hooks, sage advisors, and merchants? Then you, my friend, might want to consider spicing up your party’s social life with some three-dimensional NPCs that won’t soon be forgotten.