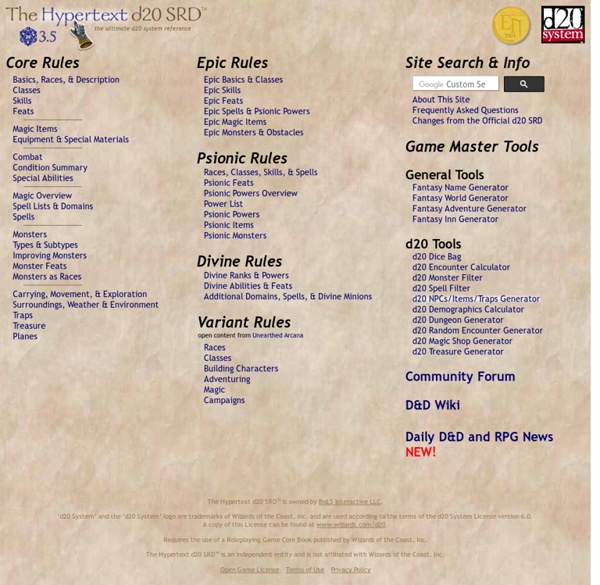 dinglesgames dnd35 « Dingles Games Warning: Cannot modify header information - headers already sent by (output started at /usr/share/wordpress2.7/wp-content/themes/dinglesgames/toolHeader.php:108) in /usr/share/wordpress2.7/wp-content/themes/dinglesgames/library/ddgettreas.php on line 7 Welcome to Dingle's Games free treasure generator for D&D 3.5. Leave a Reply You must be logged in to post a comment. This tool is for DMs who are tired of spending an hour generating treasue only to see their players just cash it all in for gold. Once you have selected a CR press the CALCLATE button to create to create the treasure. The treasure generator is free to use and supplied "as is". Light of Aurifar - Feat - DND Toolshop Feb. 23, 2014 Hi guys, one of our staff managed to create an android application! Do check it out on Google play : The app comes with SRD only (can't put copyrighted stuff on Play), but there is option to download whole dndtools.eu database. First, open the app, click on Setting and select Upgrade Database: Then, paste this link: to the window and press Accept: That's all! Please, do leave him some feedback, like, etc! Tgg Jan. 17, 2014 Over the past year, we have seen significant changes to our site. Things to come… Domains & DeitiesWe are currently in the process of updating our Domains and Deities. Races & MonstersWhile we currently have a some information on the site, we are planning on improving these entries. Mundane/Alchemical ItemsThis is currently in the development phase as we look to expand upon the items sections. Additional Items… This list represents all the entries we want to eventually implement. Did we miss something?

of the Coast Official Home Page Search © 1995-2014 Wizards of the Coast LLC, a subsidiary of Hasbro, Inc. All Rights Reserved. Dungeons & Dragons The early success of Dungeons & Dragons led to a proliferation of similar game systems. Despite this competition, D&D remains the market leader in the role-playing game industry.[5] In 1977, the game was split into two branches: the relatively rules-light game system of Dungeons & Dragons and the more structured, rules-heavy game system of Advanced Dungeons & Dragons (abbreviated as AD&D or ADnD).[1][2][6] AD&D 2nd Edition was published in 1989. In 2000, the original line of the game was discontinued and the AD&D version was renamed Dungeons & Dragons with the release of its 3rd edition with a new system. These rules formed the basis of the d20 System which is available under the Open Game License for use by other publishers. Dungeons & Dragons version 3.5 was released in June 2003, with a 4th edition in June 2008.[7][8] Play overview[edit] A D&D game session in progress Release 3.5 of the three core rulebooks Game mechanics[edit] D&D uses polyhedral dice to resolve random events.