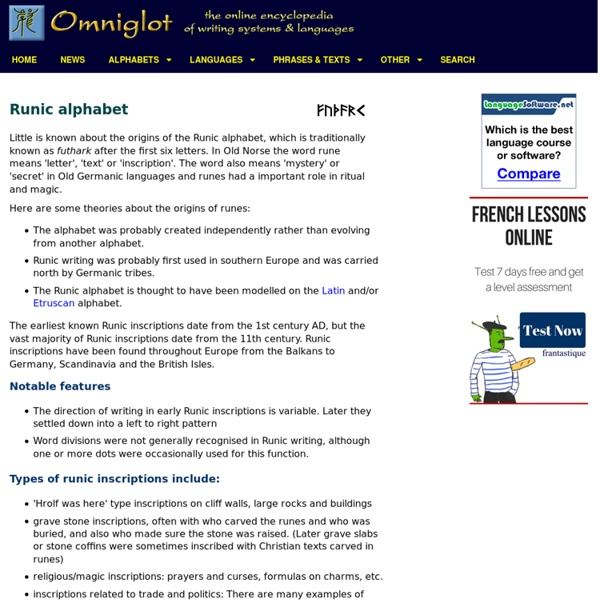 Little is known about the origins of the Runic alphabet, which is traditionally known as futhark after the first six letters. In Old Norse the word rune means 'letter', 'text' or 'inscription'. The word also means 'mystery' or 'secret' in Old Germanic languages and runes had a important role in ritual and magic. Here are some theories about the origins of runes: The alphabet was probably created independently rather than evolving from another alphabet. The earliest known Runic inscriptions date from the 1st century AD, but the vast majority of Runic inscriptions date from the 11th century. Notable features The direction of writing in early Runic inscriptions is variable. Types of runic inscriptions include: 'Hrolf was here' type inscriptions on cliff walls, large rocks and buildings grave stone inscriptions, often with who carved the runes and who was buried, and also who made sure the stone was raised. There are a number of different Runic alphabets including: Elder Futhark Notes Links Related:  Runemal • Rigmarole

Rune Meanings - The Elder Futhark I work with the "Elder Futhark", the runic alphabet which is a composite of the runic symbols most commonly used in northern Europe. The names of the runes of the Elder Futhark are speculative recreations of what linguists call "proto-Germanic", which stems from "proto-Indo-European". There are many versions of the runic alphabets. Each has variations in names, shapes, esoteric meanings and magical uses. One should not mix futharks, or the intent or meaning becomes confused. The runes are broken into three sections or groups of eight, called aett (aettir, plural). First the rune name is given, then its phonetic value, its symbolic image, and finally the esoteric meaning used in divination. Fehu(F: Domestic cattle, wealth.) Uruz: (U: Auroch, a wild ox.) Thurisaz: (TH: Thorn or a Giant.) Ansuz: (A: The As, ancestral god, i.e. Raidho: (R: Wagon or chariot.) Kenaz: (K: Beacon or torch.) Gebo: (G: Gift.) Wunjo: (W or V: Joy.) Hagalaz: (H: Hail.) Nauthiz: (N: Need.) Isa: (I: Ice.)

Jawi script Jawi is one of the two official scripts in Brunei, and is used as an alternate script in Malaysia. Usage wise, it was the standard script for the Malay language but has since been replaced by a Latin alphabet called Rumi, and Jawi has since been relegated to a script used for religious and cultural purposes. It can be typed with the Jawi keyboard. Day-to-day usage of Jawi is maintained in more conservative Malay-populated areas such as Kelantan in Malaysia and Pattani .[1] Etymology[edit] The word "Jawi" (جاوي) is an adjective for the Arabic noun Jawah (جاوة). Early history[edit] Prior to the onset of the Islamisation, when Hindu-Buddhist influences were still firmly established in the region, the Pallava script was primarily used in writing Malay language. At the early stage of Islamisation, the Arabic script was taught to the people who had newly embraced Islam in the form of religious practices, such as the recitation of Quran as well as salat. Jawi today[edit] Letters[edit]

learn morse code Earth's magnetic song recorded for the first time during a solar storm Data from ESA's Cluster mission has provided a recording of the eerie "song" that Earth sings when it is hit by a solar storm. The song comes from waves that are generated in the Earth's magnetic field by the collision of the storm. The storm itself is the eruption of electrically charged particles from the sun's atmosphere. A team led by Lucile Turc, a former ESA research fellow who is now based at the University of Helsinki, Finland, made the discovery after analyzing data from the Cluster Science Archive. Cluster consists of four spacecraft that orbit Earth in formation, investigating our planet's magnetic environment and its interaction with the solar wind—a constant flow of particles released by the sun into the Solar System. As part of their orbits, the Cluster spacecraft repeatedly fly through the foreshock, which is the first region that particles encounter when a solar storm hits our planet. "It's like the storm is changing the tuning of the foreshock," explains Lucile.

Runic magic In medieval sources, notably the Poetic Edda, the Sigrdrífumál mentions "victory runes" to be carved on a sword, "some on the grasp and some on the inlay, and name Tyr twice." In early modern and modern times, related folklore and superstition is recorded in the form of the Icelandic magical staves. In the early 20th century, Germanic mysticism coins new forms of "runic magic", some of which were continued or developed further by contemporary adherents of Germanic Neopaganism. Modern systems of runic divination are based on Hermeticism, classical Occultism, and the I Ching. Historical evidence[edit] Tacitus[edit] They attach the highest importance to the taking of auspices and casting lots. It is often debated whether "signs" refers specifically to runes or to other marks; both interpretations are plausible and Tacitus does not give enough detail for a definite decision to be made.[2] Epigraphy[edit] Medieval sources[edit] "Grass cures the scab / and runes the sword-cut" (137) Ralph Blum[edit]

Runic alphabet Runology is the study of the runic alphabets, runic inscriptions, runestones, and their history. Runology forms a specialised branch of Germanic linguistics. The earliest runic inscriptions date from around AD 150. The characters were generally replaced by the Latin alphabet as the cultures that had used runes underwent Christianisation, by approximately AD 700 in central Europe and AD 1100 in Northern Europe. However, the use of runes persisted for specialized purposes in Northern Europe. The three best-known runic alphabets are the Elder Futhark (around AD 150–800), the Anglo-Saxon Futhorc (AD 400–1100), and the Younger Futhark (AD 800–1100). Historically, the runic alphabet is a derivation of the Old Italic alphabets of antiquity, with the addition of some innovations. The process of transmission of the script is unknown. History and use[edit] The runes were in use among the Germanic peoples from the 1st or 2nd century AD. The name runes contrasts with Latin or Greek letters.

Why are astronomers interested in gravitational waves? (Intermediate) - Curious About Astronomy? Ask an Astronomer When you look up at the night sky, you see a very particular view of the Universe. You see electromagnetic radiation, light, at optical wavelengths from objects like stars. If your eyes could see radio waves, which are another wavelength of light, they would see a very different picture of the Universe. The sources of radio light are different than the sources of optical light. Astronomers want to build all different kinds of telescopes to see the entire spectrum of electromagnetic radiation. For almost the entire history of astronomy, we viewed the Universe through an electromagnetic window. On February 11th, 2016, the Laser Interferometer Gravitational-Wave Observatory (LIGO) collaboration announced the detection of gravitational waves from a black hole binary.