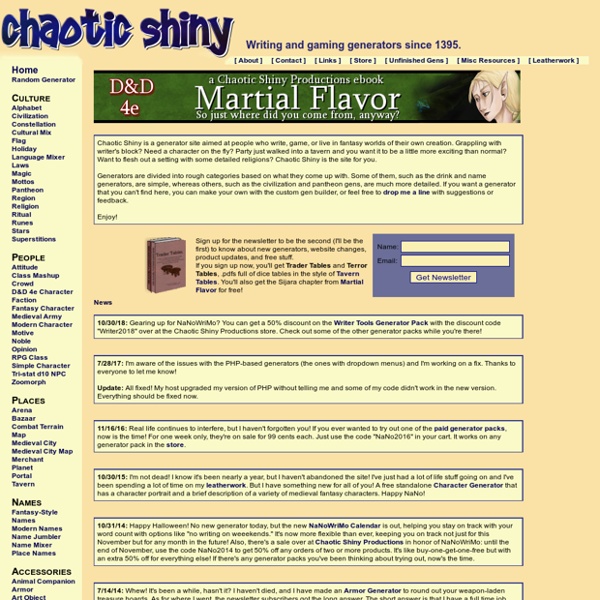 Chaotic Shiny is a generator site aimed at people who write, game, or live in fantasy worlds of their own creation. Grappling with writer's block? Need a character on the fly? Party just walked into a tavern and you want it to be a little more exciting than normal? Want to flesh out a setting with some detailed religions? Chaotic Shiny is the site for you.

Watch as the world's cities appear one-by-one over 6,000 years Watch the rise of human cities, beginning with [arguably] the world’s first city in 3700 BC and continuing up to the present. Use the controls at the bottom to pause/resume the map and to move back and forth in time. The history of urbanization, 3700 BC – 2000 AD (full-screen version) Character Name Generator Ever get stuck for names of NPCs your player characters run into that you never expected to provide them? Here?s a fast and easy way to have many monikers on hand when Rodar the fighter wants to know the name of the brash drunk challenging him to a fight in the tavern, or the name of the shy barmaid over whom they?re fighting. Simply follow the instructions below to produce names for all sorts of characters, including PCs if you like. While eight steps appear below, you only have to complete the first three to make the generator work.

TheForge : fantasy name generator Welcome to TheForge, a collection of Fantasy name and word generators, designed to spark the imagination and kindle the creative process. TheForge is a robust network of databases and sophisticated action-scripting. Nonetheless, using TheForge is a simple and intuitive process, thanks in no small part to the utility's streamlined interface. Ten Obvious Truths About Fiction The following essay was previewed in the class that Stephen Graham Jones taught for LitReactor, Your Life Story Is Five Pages Long. 1. The reader should never have to work to figure out the basics of your story. Who’s whose wife or husband, what the time period is if that matters, why these people have broken into this house, and on and on, just the basic, ground-level facts about your story. If you don’t relay that stuff up-front, as quickly and efficiently as possible (and please don’t be fancy), then your story becomes a game of three-card-monty, with you hiding information under this or that shell, trying to keep everything moving fast enough that nobody knows what’s going on. Which is to say your story becomes about the reading of the story, not the experience the story is trying to get the reader to engage.

Let This New York Times Best-Selling Author Help You With Your Magic System Nearly every fantasy novel has magic in it. The genre is practically defined by its use of magic, and if you’re sitting down to write a fantasy novel (and we know you are, what with our Inkshares contest running right now), you need to ask yourself how magic works in your world. Happily, New York Times bestselling author Brandon Sanderson has written extensively on this topic. Sanderson, author of the Mistborn novels series and the Stormlight Archive series, has created a series of laws for making great magic systems. Sanderson knows a thing or two about making magic systems.

D&D Item Clip Art One hassle I've run into, when running various fantasy RPGs, is to deal with the mass accumulation of treasure items - and, for that matter, anything else that is or isn't nailed down that the player-characters might think to take. If the characters decide to "loot", and I recite, aloud, what items they find, sometimes things get lost in the shuffle. Someone writes down an item on his sheet, and then bargaining takes place among the players as to who gets what, and in the midst of it, someone forgets to erase something here or write something there. A useful item disappears into the aether ... or it gets mysteriously multiplied across multiple character sheets. I addressed this issue first in my games of "Advanced HeroQuest" by creating small cards from pieces of mat board with a scribbled picture of the item, a convenient listing of the treasure item's value in "gold crowns", and also including any relevant information for the item's properties that the players might be privy to.

Set up Your Story in the First Paragraphs by Jodie Renner, editor, author, speaker I receive several first chapters (and synopses) every week as submissions for possible editing, and I always read the first page. Some are clear and compelling and make me want to read more. FAQS About Worldbuilding How important is worldbuilding? How important is your story to you? People hear the word “worldbuilding” and automatically assume that the discussion is going to apply only to people who are writing science fiction and fantasy — after all, for everyone else, this is the world they’re going to be writing in, and it has already been built. That’s not the case. You’re worldbuilding when you sketch out a floorplan of the house that your character lives in so that you don’t accidentally have her bedroom on the first floor in chapter one and on the second in chapter three.

Black Death Spread of the Black Death in Europe (1346–53) The Black Death is thought to have originated in the arid plains of central Asia, where it then travelled along the Silk Road, reaching the Crimea by 1343.[6] From there, it was most likely carried by Oriental rat fleas living on the black rats that were regular passengers on merchant ships. Spreading throughout the Mediterranean and Europe, the Black Death is estimated to have killed 30–60% of Europe's total population.[7] In total, the plague reduced the world population from an estimated 450 million down to 350–375 million in the 14th century. The aftermath of the plague created a series of religious, social, and economic upheavals, which had profound effects on the course of European history. It took 150 years for Europe's population to recover.

50 Pieces Of Writing Advice From Authors Writers – well, good writers anyway – understand words. They have this uncanny knack of knowing which one to use and when – and just think, there are thousands upon thousands upon thousands of the blighters. So, when a writer writes about writing, it’s worth taking note. Especially if you’re a budding man (or woman) of letters. What follows are 50 priceless nuggets of wisdom, 50 slices of self-reflection, 50 explanations as to why writers write.

Generating fantasy maps These are some notes on how I generate the maps for my Twitter bot @unchartedatlas, which is based on a generator I originally produced during NaNoGenMo 2015. There's JavaScript code for the generator on Github here, and the original messy Python generator code can be seen here. You may also be interested in this companion piece, which describes the placename generation.

History of Ireland (1169–1536) A tower house near Quin. The Normans consolidated their presence in Ireland by building hundreds of castles and towers such as this Trim Castle (1169-) is a major construction of this period The History of Ireland 1169–1536 covers the period from the arrival of the Cambro-Normans[1] to the reign of Henry VIII of England, who made himself King of Ireland. After the Norman invasion of 1171, Ireland was under an alternating level of control from Norman lords and the King of England. Previously, Ireland had seen intermittent warfare between provincial kingdoms over the position of High King.