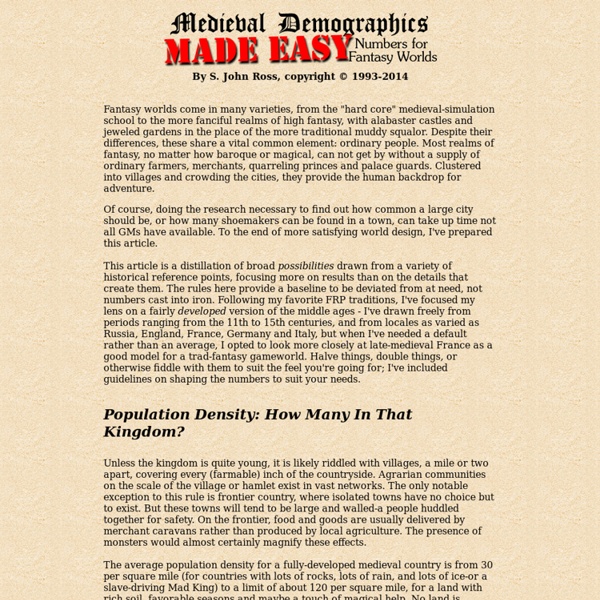 Fantasy worlds come in many varieties, from the "hard core" medieval-simulation school to the more fanciful realms of high fantasy, with alabaster castles and jeweled gardens in the place of the more traditional muddy squalor. Despite their differences, these share a vital common element: ordinary people. Most realms of fantasy, no matter how baroque or magical, can not get by without a supply of ordinary farmers, merchants, quarreling princes and palace guards. Clustered into villages and crowding the cities, they provide the human backdrop for adventure. Of course, doing the research necessary to find out how common a large city should be, or how many shoemakers can be found in a town, can take up time not all GMs have available. To the end of more satisfying world design, I've prepared this article. This article is a distillation of broad possibilities drawn from a variety of historical reference points, focusing more on results than on the details that create them. Population Spread

ProFantasy Software - map making for fantasy, modern and sci-fi games and for historical cartographers The Mystery of Extraordinarily Accurate Medieval Maps Clues in the Errors Hessler began to look for clues within the portolan charts themselves. Borrowing the morphometric techniques he used to track movement of the Alpine butterflies’ spots, he transferred each point from a modern Mercator map of the Mediterranean onto the equivalent point on the oldest portolan chart at the Library of Congress. According to carbon dating of its calfskin substrate, this document was created sometime between 1290 and 1350. The resulting grid on the portolan chart was slightly distorted in various small ways — not surprising, given the imprecise sailing data with which the mapmaker likely had to work. But it was also fairly consistently rotated by 8.5 degrees counterclockwise. Hessler suspected the skew was an artifact of compasses, which had arrived in Europe from China not long before the map was created. Working from compass measurements but not correcting for declination could cause just the kind of rotation Hessler’s analysis revealed.

The Domesday Book - Medieval Demographics Made Easy The Domesday Book Penned by Brandon Blackmoor, based on Medieval Demographics Made Easy by S. John Ross Here is subscribed the inquisition of lands as the barons of the king have made inquiry into them... <p>Forsooth, thy browser is truly antiquated! Land Mass The population density of , due to factors such as climate, geography, and political environment, is persons per km2 . occupies km2 ( hexes, each km across and roughly km2 in area). Population 's population is approximately persons. residents are isolated or itinerant. residents live in villages. residents live in towns. residents live in cities. residents live in big cities. The average distance between villages is km. supports Universities. supports head of livestock: fowl (e.g. chickens, geese, ducks). dairy and meat animals (e.g. cows, goats, pigs, sheep). Large population centers of any scale are the result of traffic. Castles and Fortifications The inhabitants of have been building castles for the last years. Towns and Cities

The Dark Secrets of Medicine–Revealed in a New Series! Imagine, if you will, a low stone slab. Upon it, dimly lit and un-preserved, is a three-day-old corpse going slowing rancid in warm the summer night. This, young surgeon, is your textbook. What happened in this shadowy period is the subject of myth, mystery, mayhem and history–and all of it is rendered in fascinating detail by a new documentary project: Medicine’s Dark Secrets, brought to you by the indefatigable Chirurgeon’s Apprentice: Dr. Lindsey is a medical historian who completed her doctorate at Oxford University with a specialty in the history of seventeenth-century alchemical pharmacopeia.Her interests are broad and boundary-crossing–and her work renders medical history and medical artifacts accessible to an equally broad audience. Well. History isn’t just the domain of Historians and Academics. Medicine’s Dark Secrets will explore the reasons why certain bodies and artifacts were put on display in the museums we visit.

untitled Name: Update!! After many years of inactivity, I finally got around to fixing this up! It is now set to save your town. Welcome to Justin Dunmyre's Town Generator! You need not provide input for races representing less than 1% of the Demographic. The DMG recommends: Isolated Community: Mixed Community: Integrated Community: Credits Cambridge Digital Library - University of Cambridge Cambridge University Library holds the largest and most important collection of the scientific works of Isaac Newton (1642-1727). Newton was closely associated with Cambridge. He came to the University as a student in 1661, graduating in 1665, and from 1669 to 1701 he held the Lucasian Chair of Mathematics. In 1699 Newton was appointed Master of the Mint, and in 1703 he was elected President of the Royal Society, a post he occupied until his death. After his death, the manuscripts in Newton's possession passed to his niece Catherine and her husband John Conduitt. In 1872 the fifth earl passed all the Newton manuscripts he had to the University of Cambridge, where they were assessed and a detailed catalogue made. The remainder of the Newton papers, many concerned with alchemy, theology and chronology, were returned to Lord Portsmouth. See also

Inkwell Ideas » Free City Maps: Random Fantasy City Map Generator Updated The number of city section layouts has expanded by one (a new west section that has a circular street layout) and there is also a new large-ish circular tower randomly added in the southern city section. Link: Random City Map Generator If you haven’t seen it before, the random city is divided into 3 sections, which are roughly east (about 90 degrees of a circle), west (about 110 degrees) and south (about 160 degrees.) The west main section has 3 possible layouts while the east and south sections have two. However, each layout is randomly determined to be low, medium, or high density or not to exist. Each section also may have an optional outer section with one layout each, but it that outer section of each may be low, medium or high density. Then the sections may or may not be connected. Finally some other odds and ends.