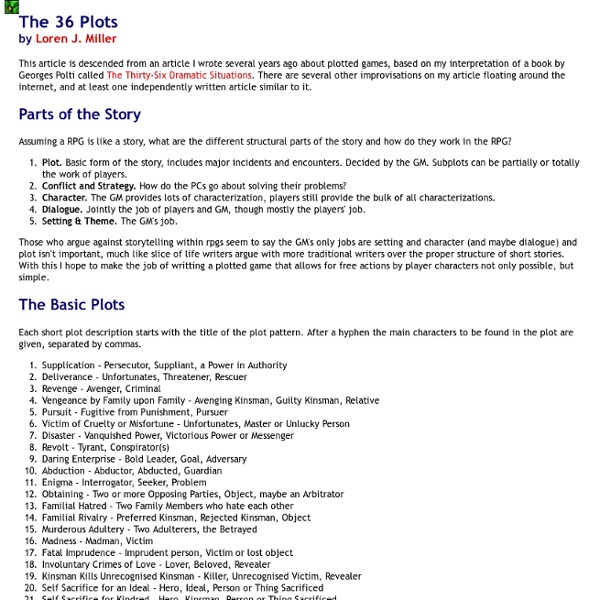 This article is descended from an article I wrote several years ago about plotted games, based on my interpretation of a book by Georges Polti called The Thirty-Six Dramatic Situations. There are several other improvisations on my article floating around the internet, and at least one independently written article similar to it. Parts of the Story Assuming a RPG is like a story, what are the different structural parts of the story and how do they work in the RPG? Plot. Those who argue against storytelling within rpgs seem to say the GM's only jobs are setting and character (and maybe dialogue) and plot isn't important, much like slice of life writers argue with more traditional writers over the proper structure of short stories. The Basic Plots Each short plot description starts with the title of the plot pattern. RPG scenarios IMHO too often tend to be Daring Enterprises: The PCs bravely go on a quest to bring back some priceless relic and enough gold to give a hundred horses hernias.

Story Design by Layer I | The Official RPG Maker Blog Ask a dozen RPG fans what the most important part of an RPG is and eleven of them will probably respond with the same thing: Story. That’s not to say that you can skimp on the other portions of the game, but it does mean story should be a major concern. When discussing the story of an RPG, I think the first thing to do is define what we mean by story. The definition I play to use for this tutorial is this: Story is the combination of the setting, characters, and plot, and how they interact with each other. While the individual parts are important, the most important portion is the interaction. There are many ways to write a story, but the way I’ve personally found to be most successful for me is what I call Design by Layer. In Design by Layer, instead of fully fleshing out every detail as you go through your plot, you start with the broadest strokes of the entire story, then go through it over and over adding more and more detail. Metal Gear Solid has two major obvious themes. !

Studio » twine I recently built a game – The Party – using Twine, and styled it using CSS3. The source can be found here. I’ve always had an interest in interactive stories. I loved Choose Your Own Adventure books, Lone Wolf, even MUDs and RPGs with deep conversation trees (BioWare games). These kind of interactive experiences have always been available to make, but until Twine, were always sort of cumbersome to build and publish. Twine lets you drag and drop passages into a connected tree. My comments on building The Party can be broken down into Technical and Narrative categories: Twine itself is still in beta, so the program itself could still use some polish. The passages in The Party You can include CSS and javascript in their own passages (using the tag “stylesheet” or “script”). CSS3 lets you do some fun animations Twine also supports macros. The other problem with macros is that they render as whitespace in the final passage. Conditional logic in Twine Large stories get pretty difficult to “debug”.