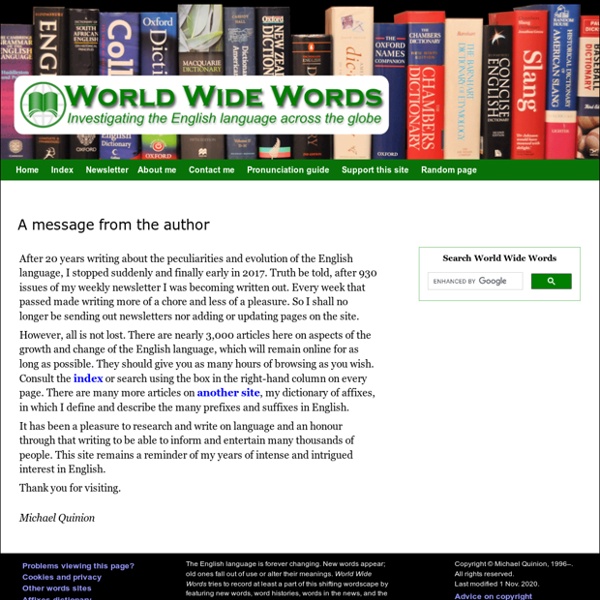 About this site The English language is forever changing. New words appear; old ones fall out of use or change their meanings. World Wide Words tries to record at least some part of this shifting wordscape by featuring new words, word histories, the background to words in the news, and the curiosities of native English speech. This is the archive of pieces that have appeared in the free newsletter. Weekly issues include much more than appears here, including discussion by readers, serendipitous encounters with unfamiliar language, and tongue-in-cheek tut-tuttings at errors perpetrated by sloppy writers.

Fossil word A fossil word is a word that is generally obsolete but remains in currency because it is contained within an idiom still in use.[1][2] Fossil status can also occur for word senses and for phrases. An example for a word sense is navy in merchant navy, which means 'commercial fleet' (although that sense of navy is obsolete elsewhere). An example for a phrase is in point ('relevant'), which is retained in the larger phrases case in point (also case on point in the legal context) and in point of fact but is not otherwise used outside of a legal context. English language examples[edit] See also[edit] Take Our Word For It Issue 93 From Caroline: I know fork is such a commonly used word, but it is so weird. If you say it a lot, it's actually a really funny word.

9 Websites You Can Use to Learn a Foreign Language - StumbleUpon Traveling is a great way to see a country and learn about the people who live there. But if you really want to learn what makes them tick than you need to learn their language. Immersing yourself in a new language can seem like a daunting task.

Names for the Wind Abroholos: a squall frequent from May through August between Cabo de Sao Tome and Cabo Frio on the coast of Brazil. Aejej in Morocco: a whirlwind in the desert. Aeolus: regent of the winds in Greek mythology. Syllables, Scrabble Letters, and Picking Brand Names - Rich Barton The Completely Ownable, “Made-Up” Consumer Brand Wins Long Term I wrote this as a private email in 2006 and just refreshed for the blog “Should we call our site something literal or should we make up a new word?”

"Investigating international English from a British viewpoint." by macopa May 14