How to Create a Character 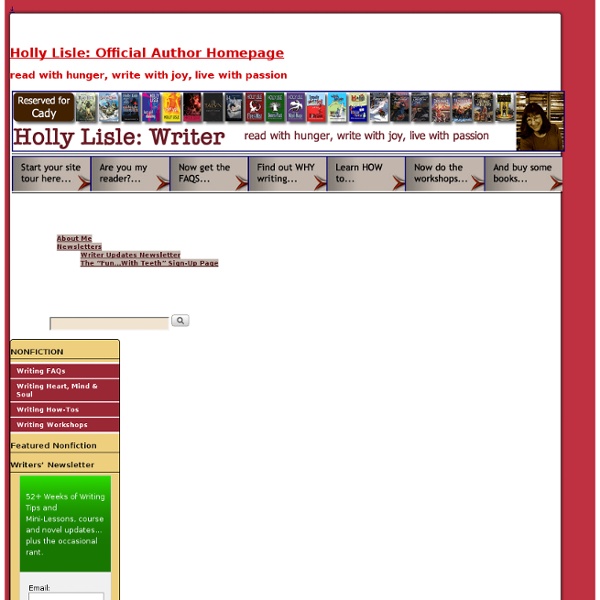 by Holly Lisle All Rights Reserved No matter what sort of fiction you’re writing, you’re going to have to populate your story with characters, and a lot of them, if not all of them, you’re going to have to create from scratch. Unfortunately — or maybe fortunately — there is no Betty Crocker Instant Character-In-A-Can that you can mix with water and pop into the oven for twenty minutes. There aren’t any quick and easy recipes, and I don’t have one either, but I do have some things that have worked for me when creating my characters, and some things that haven’t. You may find my experiences useful. For what they’re worth, here are my Do’s and Don’ts. Don’t start your character off with a name or a physical description. I know this doesn’t seem logical at first glance — after all, you name a baby before you get to know him very well. There are a couple of reasons. Do start developing your character by giving him a problem, a dramatic need, a compulsion. What does the character want?

How to Write a Character Sketch: Learning More About Your Characters’ Motivations and Personalities Regardless of the type of writing you are doing, knowing who your characters are and knowing them well will add greatly to your work. Understanding your characters’ personalities through a character sketch helps you to understand where they are coming from and what motivates them. This, in turn, helps you understand what drives all of the action in your work, and the clearer this is, the easier your audiences will be able to connect with your writing. But how do you go about writing a character sketch?

Creating a character profile When you get an idea for a short story or a novel you probably get the basic idea of the characters with it. But in order to build believable characters you need more than just a basic idea of them. You need to really them. 50 Questions to Ask Your Characters It's time for another PEP rally by our guestblogger Sam. Just as a reminder, PEP stands for Productivity, Ego, and Procrastination, the three most important things to a writer after their computer or favorite pen. Even though the Rally was created to start a week off right, it can help combat the dreaded writers block any day of the week. These tips and activities will get you moving towards that word count in no time. Well, maybe not the last one, but who said you have to be all work? Productivity

Top 10 Tricks to Make your Villain Stand Out Welcome back to the column that breaks down gaming into what’s really important, ten things at a time! Any story arc needs a good villain. The best big bads are more than just another devil or vampire or dragon. 102 Resources for Fiction Writing « Here to Create UPDATE 1/10: Dead links removed, new links added, as well as Revision and Tools and Software sections. Are you still stuck for ideas for National Novel Writing Month? Or are you working on a novel at a more leisurely pace?

Creating an Original Character By Maisha Foster-O'Neal You've heard the old maxim before... 'a character can make or break your story.' Okay, okay, so you want to write an interesting character. Second Person Point of View — The Writer’s Craft Enrollment Limited Sherry Wilson's step-by-step method helped me organize my thoughts and transform a simple idea into a full-fledged plot. Without her help and guidance, I'd still be walking around with just another "great idea for a story." Thanks to Sherry, though, I've published three novels and know there are more on the way! ~ Debi Faulkner, Summoning, LilyPad Princess and Murphy's Law "Sherry is extremely professional and knowledgeable in this field.

25 Ways To Fuck With Your Characters - StumbleUpon As storyteller, you are god. And to be frank, you’re not a particularly nice god — at least, not if you want your story to resonate with readers. A good storyteller is a crass and callous deity who treats the characters under his watchful eye like a series of troubled butt-puppets. From this essential conflict — storyteller versus character — a story is born. Character Development: Creative Writing Print version Characters are the most important component of any narrative. Without them, there would be no story. Character development is an important skill to master because characters are important parts of any creative writing from books and short stories, from biographies and autobiographies, to poetry.

Story Structure & Plot - Novel Writing Tips Conflict and Character within Story Structure The Basic Three Act Structure The simplest building blocks of a good story are found in the Three Act Structure. Separated by Plot Points, its Act 1 (Beginning), Act 2 (Middle), and Act 3 (End) refer not to where in time in the story they lie but instead fundamental stages along the way. Seven Common Character Types Seven Common Character Types by Terry W. Ervin II Fiction writers employ a variety of characters while weaving their tales. Omniscient Person Point of View — The Writer’s Craft Basically, omniscient point of view means that the story is told from an all-seeing God-like, omnipotent viewpoint. You would use third person pronouns in the writing, but you can choose to dip into the head of any of the characters and reveal things that have occurred in the past or will happen in the future. This was once a very popular method of storytelling.