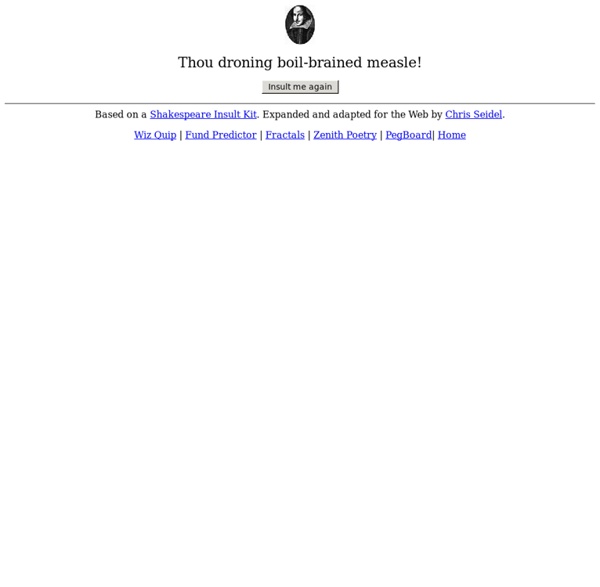 World Wide Words: Recently added A Quick Guide to Reading Shakespeare Probably the number one complaint about reading Shakespeare is that it doesn't always read like "normal" English. It's a natural and legitimate accusation. Shakespeare wrote for an audience over 400 years ago. Think about how word meanings and expressions change over a relatively short time; four centuries bring with them a lot of alterations. For instance, the history of literary English is the history of invasions, with Celtic supplanted by Anglo-Saxon, which was usurped by Norman French (and accentuated with Latin). The Elizabethan era was a particularly volatile growth spurt in the English language. So how can a reader today bridge that gap between then and now? Word Usage First and foremost, there have been numerous vocabulary changes in English since Shakespeare was writing. Grammar This is where the flexibility of Shakespeare's English is often most apparent. Wordplay Some of the most difficult passages of Shakespeare occur when the Bard is purposely playing with language.

The Seven Ages of Man  William Shakespeare The Seven Ages of Man William Shakespeare All the world’s a stage, And all the men and women merely players; They have their exits and their entrances, And one man in his time plays many parts, 5 His acts being seven ages. At first the infant, Mewling and puking in the nurse’s arms; And then the whining schoolboy, with his satchel And shining morning face, creeping like snail Unwillingly to school. And then the lover, 10 Sighing like furnace, with a woeful ballad Made to his mistress’ eyebrow. Making Meanings First Thoughts 1. Shaping Interpretations 2. 3. 4. 5. 6. Extending the Text 7. Challenging the Text 8. Back to the Table of Contents

In Search of Shakespeare . The "Punny" Language of Shakespeare Introduction One of the most difficult challenges of studying Shakespeare is breaking the language barrier. There are several factors that often confuse the reader about the language of Shakespeare: the use of obsolete words, the order of sentence wording, and puns that depended on the meaning, usage, and pronunciation of words. For the first time reader of Shakespeare, the text may seem confusing and hard to translate, but it is important to understand that Shakespeare did indeed write in English, just a slightly different version of what we consider to be modern English. By learning about some of the Early Modern English word meanings, sentence structure, and puns students will be able to understand and enjoy the genius and humor in Shakespeare's work. Students will enjoy trying their hand at creating their own puns and finding puns in modern literature. Objectives Estimated Time Three 45-minute class periods Materials Procedure Extension Activity 1. 2. Online Resources Standards NCTE and IRA:

A-Z of Unusual Words - The Project Twins Bold graphics and visual wit are used to interpret and represent a collection of strange, unusual and lost words. These images explore the meaning behind the words, which are sometimes even more strange or unusual. This series of work has been exhibited during Design Week Dublin 2011 and has been featured and reviewed on various blogs and magazines including Brainpickings, The Huffington Post and Design Taxi. Awarded a Merit in the 3X3 Proshow and featured in 3X3 Illustration Annual 2012. Prints are available in our online shop. 50cm X 70cm Original Giclee Print on Hahnemühle 100% Cotton Rag, 310 gsm, bright whiteEdition Size – 10 (signed and numbered) Acersecomic: A person whose hair has never been cut. Biblioclasm: The practice of destroying, often ceremoniously, books or other written material and media. Cacodemonomania: The pathological belief that one is inhabited by an evil spirit. Dactylion: An anatomical landmark located at the tip of the middle finger.

Absolute Shakespeare - plays, quotes, summaries, essays... Shakespeare's Sonnets Shakespeare's Grammar May Be The Real Source Of His Genius Read a line from a William Shakespeare play and notice the cadence with which you speak. All of those breaths and pauses from the commas and semicolons spread seemingly sporadically within the flowery language are not just for theatrical drama; they may be the source of Shakespeare's genius. Dr. Jonathan Hope, a reader in English in the Faculty of Humanities & Social Sciences at the University of Strathclyde in Glasgow, Scotland, dedicates a majority of his research to figuring out what makes Shakespeare's prose so, well, poetic. Through computer-based linguistic analysis, Hope dissects the language of Early Modern literature, with a focus on the works of Shakespeare. Though there is no doubt the writer had a knack for language (according to the Oxford English Dictionary, he coined more than 500 words), it was his liberal use of grammar that set him apart. Dr.

Unusual Words Unusual Words A by no means exhaustive list of rare, obscure, strange and sometimes funny words and their meanings that only seem to crop up in crosswords and dictionaries. Words that are used so seldom, you wonder who invented them and why. Home ~ The Stories ~ Diversions ~ Links ~ Contact Shakespeare's Sonnets