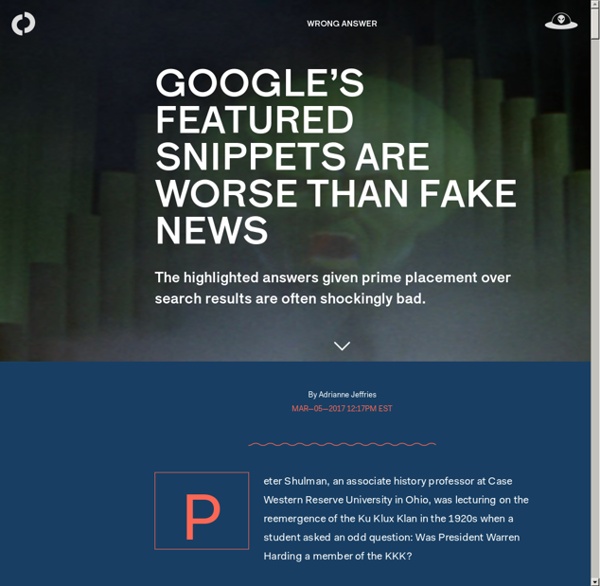 Peter Shulman, an associate history professor at Case Western Reserve University in Ohio, was lecturing on the reemergence of the Ku Klux Klan in the 1920s when a student asked an odd question: Was President Warren Harding a member of the KKK? Shulman was taken aback. He confessed that he was not aware of that allegation, but that Harding had been in favor of anti-lynching legislation, so it seemed unlikely. But then a second student pulled out his phone and announced that yes, Harding had been a Klan member, and so had four other presidents. It was right there on Google, clearly emphasized inside a box at the top of the page: For most of its history, Google did not answer questions. Type in the name of a person and you’ll get a box with a photo and biographical data. Unfortunately, not all of these answers are actually true. Back to Shulman and his students. “I understand what Google is trying to do, and it’s work that perhaps requires algorithmic aid,” Shulman said in an email.

In age of alternative facts, a scholarly course on calling out crap ired of alternative facts, fake news, and breathless hyperbole, two professors at the University of Washington are trying to strike a blow for science. Their weapon? A new course: “Calling Bullshit In the Age of Big Data.” The class website and colorful syllabus went online last month and almost instantly went viral. article continues after advertisement “We woke up the next morning to chaos. US Senate Says Your ISP Can Sell Your Private Data. Here's What To Do Ever since Edward Snowden took off with a cache of top secret NSA documents, and revealed to the world how un-private online user data really was, there has been an obsession with staying private online. That obsession for privacy was protected by the then-Democratic leadership of the FCC who formulated rules last year to that effect. But now all of that work may have been thrown under the bus by the now Republican-dominated US Senate’s decision to scrap those privacy rules. The new rules would allow ISP’s to sell your private online data to the highest bidder without obtaining your consent first.

Google is Quietly Recording Everything You Say Thanks to a function of their search software, Google could have years worth of your conversations recorded, and you can hear it for yourself. Your cringe-worthy history can be heard and viewed along with a list of all your searches, at your personal Google history page. The feature was built into Google’s search function as a means of delivering accurate search results. However, the sheer accuracy and amount of data Google stores is chilling. 18 free cloud storage options The cloud is full of free storage, if you know where to look. From Box to DropBox, Google to Apple, there’s plenty of free storage to be had in the cloud. Many companies use free cloud storage as a way to entice users into their clouds in hopes that they will pay more for additional storage.

I’ll never bring my phone on an international flight again. Neither should you. A few months ago I wrote about how you can encrypt your entire life in less than an hour. Well, all the security in the world can’t save you if someone has physical possession of your phone or laptop, and can intimidate you into giving up your password. And a few weeks ago, that’s precisely what happened to a US citizen returning home from abroad. On January 30th, Sidd Bikkannavar, a US-born scientist at NASA’s Jet Propulsion Laboratory flew back to Houston, Texas from Santiago, Chile. On his way through through the airport, Customs and Border Patrol agents pulled him aside.

Learning Myths And Realities From Brain Science This blog post has some pretty useful information. So print it out; get out your highlighter and take off the cap. Ready? Now throw it away, because highlighters don't really help people learn. We all want for our kids to have optimal learning experiences and, for ourselves, to stay competitive with lifelong learning. But how well do you think you understand what good learning looks like?

Number Of New Cases Of Measles This Year Is 'Sharply Rising,' According To WHO : Goats and Soda Next week I'll be hopping on a plane for an 11-hour ride to Europe with a strong-willed, 1 1/2-year-old toddler. A big concern is how to deal with the inevitable meltdowns. But my top priority before boarding is about my little girl's health: Is she protected from the measles? The virus — which kills almost 400 kids each day worldwide — is hitting Europe hard this year. Romania is fighting a large outbreak with more than 3,400 cases, including 17 deaths.