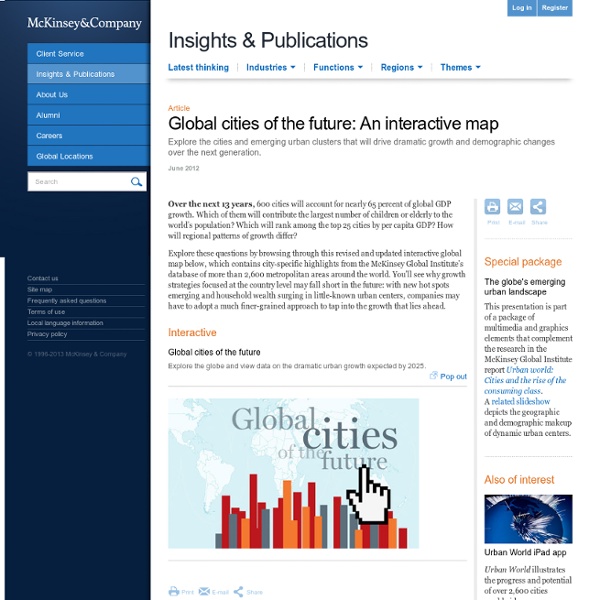 Over the next 13 years, 600 cities will account for nearly 65 percent of global GDP growth. Which of them will contribute the largest number of children or elderly to the world’s population? Which will rank among the top 25 cities by per capita GDP? Explore these questions by browsing through this revised and updated interactive global map below, which contains city-specific highlights from the McKinsey Global Institute’s database of more than 2,600 metropolitan areas around the world. Interactive

14 Bloom's Taxonomy Posters For Teachers 14 Brilliant Bloom’s Taxonomy Posters For Teachers by TeachThought Staff Bloom’s Taxonomy is a useful tool for assessment design, but using it only for that function is like using a race car to go to the grocery–a huge waste of potential. In an upcoming post we’re going to look at better use of Bloom’s taxonomy in the classroom, but during research for that post it became interesting how many variations there are of the original work. The follow simple, student-centered Bloom’s graphics were created by helloliteracy! The following “Bloom’s pinwheel” comes from Kelly Tenkley and ilearntechnology.com:

How Internet Search Engines Work" When most people talk about Internet search engines, they really mean World Wide Web search engines. Before the Web became the most visible part of the Internet, there were already search engines in place to help people find information on the Net. Programs with names like "gopher" and "Archie" kept indexes of files stored on servers connected to the Internet, and dramatically reduced the amount of time required to find programs and documents. In the late 1980s, getting serious value from the Internet meant knowing how to use gopher, Archie, Veronica and the rest. Today, most Internet users limit their searches to the Web, so we'll limit this article to search engines that focus on the contents of Web pages. Before a search engine can tell you where a file or document is, it must be found. How does any spider start its travels over the Web? Google began as an academic search engine. Keeping everything running quickly meant building a system to feed necessary information to the spiders.

A dozen public accounting ideas that don't work anymore I recently heard an excellent sermon on the importance of letting go of the past so that we can each pursue our intended future. The speaker referred to a book by Robin Meyers in which he asserts that there may be an eighth deadly sin: nostalgia. From what I gathered, Meyers suggests that we go astray when we believe that “the vices of the present prove not only that all is now in disarray but that this ‘awful’ age is inherently inferior to some golden age that came before it.” When I heard these assertions, I was overwhelmed because they crystalized an issue that seems to plague so many CPA firm leaders: an attachment to some bygone “good old days” that might not have even been that good. When we focus on what’s “wrong with today’s (fill in the blank),” it allows us to delay making the significant—almost radical—changes needed to address modern realities and embrace a future when things will be very different. Wanting to retain the ability to be “right” and make the new way “wrong.”

Cities @ Crossroads: Digital Technology and Local Democracy (Law - Download) Interdisciplinary Center (IDC), Herzliyah, IsraelMarch 9, 2011 Brooklyn Law Review, Vol. 76, No. 4, 2011 Boston Univ. School of Law Working Paper No. 11-11 Abstract: The transformative potential of digital technology for democratic governance is hardly questioned, but has not yet been tackled by legal scholarship. The Article starts filling this gap by exploring the role and functions of digital technology in local governance. The Article situates the relations between cities and citizens along two complementary axes - consumerism, in which citizens are regarded as consumers of services provided by the city; and participation, in which citizens play an active role in local decision-making and agenda-setting. The Article then argues that while American cities reasonably satisfy consumerist, service-provision requirements, they fail to benefit from the participatory potential of digital technology. Number of Pages in PDF File: 73 Accepted Paper Series Suggested Citation

Haines Centre for Strategic Management Robots Aren't the Problem: It's Us - The Chronicle Review By Richard Florida Swikar Patel for The Chronicle Review Everyone has an opinion about technology. Depending on whom you ask, it will either: a) Liberate us from the drudgery of everyday life, rescue us from disease and hardship, and enable the unimagined flourishing of human civilization; or b) Take away our jobs, leave us broke, purposeless, and miserable, and cause civilization as we know it to collapse. The first strand of thinking reflects "techno-utopianism"—the conviction that technology paves a clear and unyielding path to progress and the good life. The technology critic Evgeny Morozov dubs today's brand of technology utopianism "solutionism," a deep, insidious kind of technological determinism in which issues can be minimized by supposed technological fixes (an extreme example he gives is how a set of "smart" contact lenses edit out the homeless from view). On the other side stand the growing ranks of "techno-pessimists." This either-or dualism misses the point, for two reasons.

7 Ways to Close the "Value Gap" on Customer Service By Tom Barrett, CIC, AAI The trends that began in 2013, with carriers tightening appointment criteria, looking at profitability first and foremost, requiring us to sell multiple lines of coverage (e.g., auto with home), and reductions in commission continue into the second quarter of 2014. The pressure on the independent agent, as outlined in the McKinsey Report in 2013, is but one of the many indicators. Even though some refuse to admit it, insurance distribution is rapidly changing. There are two main reasons for this: The quiet movement on the part of some carriers to create a direct sales force (without you, the agent) to write small business, as they have done in personal lines. Increasingly vital in this changing marketplace is what we refer to as the ability to justify your position and add extra value as the agent. Click on the following pages to learn the seven primary points you can research and prepare for creating “your value to your customer.” 4. 5. 6. 7.