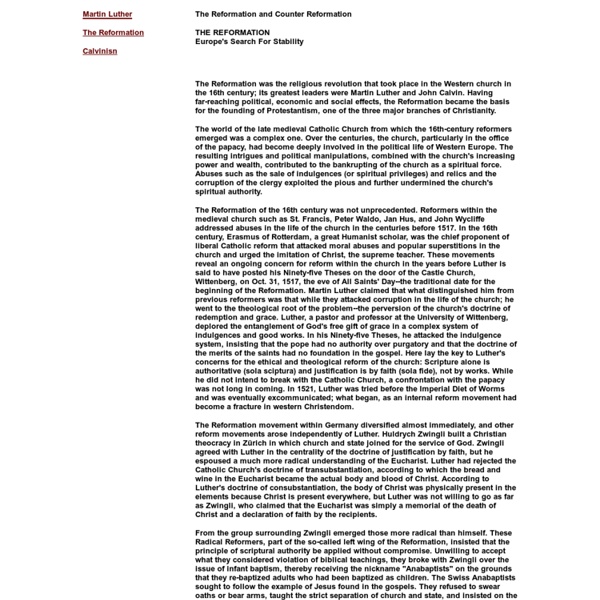 Counter-Reformation | religious history Alternative titles: Catholic Reformation; Catholic Revival Counter-Reformation, also called Catholic Reformation, or Catholic Revival, Athravaeth Gristnogavl title pageThe Newberry Library, Prince Louis-Lucien Bonaparte Collection, 1901 (A Britannica Publishing Partner)in the history of Christianity, the Roman Catholic efforts directed in the 16th and early 17th centuries both against the Protestant Reformation and toward internal renewal; the Counter-Reformation took place during roughly the same period as the Protestant Reformation, actually (according to some sources) beginning shortly before Martin Luther’s act of nailing the Ninety-Five Theses to the church door (1517). Early calls for reform grew out of criticism of the worldly attitudes and policies of the Renaissance popes and many of the clergy.

9 Things You Should Know About the Council of Trent Yesterday marked the 450th anniversary of the closing of the Council of Trent, one of the most significant series of meetings in Christian history. Here are nine things evangelicals should know about the Council and the decrees that it issued: 1. The Council of Trent was the most important movement of the Catholic Counter-Reformation, the Catholic Church’s first significant reply to the growing Protestants Reformation. The primary purpose of the council was to condemn and refute the beliefs of the Protestants, such as Martin Luther and John Calvin, and also to make the set of beliefs in Catholicism even clearer. 2. 3. . . . if any one receive not, as sacred and canonical, the said books entire with all their parts, as they have been used to be read in the Catholic Church, and as they are contained in the old Latin vulgate edition; and knowingly and deliberately contemn the traditions aforesaid; let him be anathema. 4. 5. 6. 7. 8. 9. Recent posts in this series:

Roman Catholic Church|Council of Trent|Canons on Justification by Matt Slick Lutheranism was growing strong in the 1500's. In response to this, the Roman Catholic church convened the Council of Trent in November of 1544 in an attempt to counter the doctrines raised and supported by the Reformers. The official opening of the council was on Dec. 13, 1545, and was closed on Dec. 14, 1563. Following are several of the doctrinal statements made on Justification at the council of Trent. Finally, you will see the word, "anathema," used many times by the Council. In spite of what Catholicism states, the Bible speaks differently. CANON 9: "If any one saith, that by faith alone the impious is justified; in such wise as to mean, that nothing else is required to co-operate in order to the obtaining the grace of Justification, and that it is not in any way necessary, that he be prepared and disposed by the movement of his own will; let him be anathema." This article is also available in: Español