Top of the Web 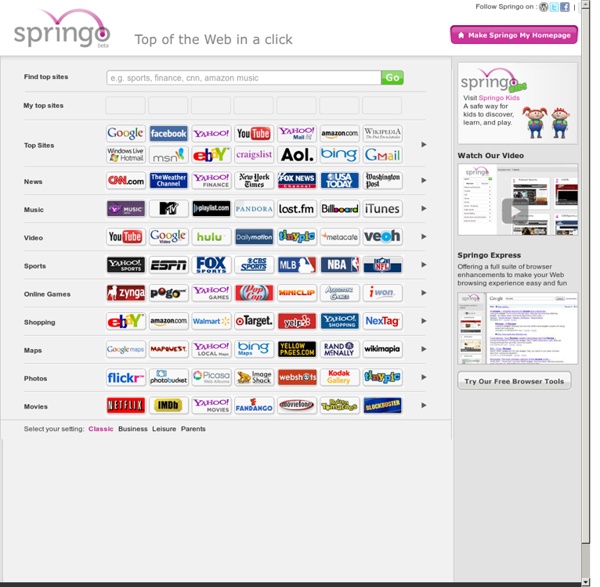 how to be creative Accept that you’ve got the creative urge and it’s never going to go away. Make friends with it. Drink some tequila if you need to. Commit to the process. Rome wasn’t built in a day. Unless of course it was built by aliens. Quintura Quintura - visual search engine Quintura - visual search engine for hotels ⚫ London hotels ⚫ Manchester hotels ⚫ Liverpool hotels ⚫ Bournemouth hotels 100+ Alternative Search Engines You Should Know If someone asks you, off the top of your head, what search engines you use or know off, chances are you’ll be naming the regulars: Google, Bing, Yahoo. The Internet however is a really big place and there are plenty more search engines out there that can cater to very specific requirements. General Search Engines We’re skipping the search engines that everyone know about so you won’t be seeing Google, Yahoo or Bing in this list. Here are many other alternative search engines available out there.

! Google Ultimate Interface About Google In 1996-1997, Larry Page and Sergey Brin came up with an algorithm to rank web pages, called PageRank. Realizing the potential to improve search engines, they tried and failed to sell the technology to any. So they founded Google, which in an incredibly short period of time has become one of the world’s most powerful companies. 95 best websites you should bookmark today Google is the internet surfer's best friend and worst enemy. If you know what you're after, just type it into the search engine's famous little box and – hey presto – you'll be given a list of related sites in order of relevance. Such is Google's dominance that its name has become a synonym for search. And rightly so. When was the last time you Yahooed something? And good though Bing is, it's not ringing our bell just yet.

Why Americans Are the Weirdest People in the World IN THE SUMMER of 1995, a young graduate student in anthropology at UCLA named Joe Henrich traveled to Peru to carry out some fieldwork among the Machiguenga, an indigenous people who live north of Machu Picchu in the Amazon basin. The Machiguenga had traditionally been horticulturalists who lived in single-family, thatch-roofed houses in small hamlets composed of clusters of extended families. For sustenance, they relied on local game and produce from small-scale farming. They shared with their kin but rarely traded with outside groups. While the setting was fairly typical for an anthropologist, Henrich’s research was not. Rather than practice traditional ethnography, he decided to run a behavioral experiment that had been developed by economists.

Search in Archie Welcome to archie.icm.edu.pl Search for: Database: Worldwide Anonymous FTP Polish Web Index Search Type: Sub String Exact Regular Expression Case: Insensitive SensitiveDo you want to look up strings only (no sites returned): NO YESOutput Format For Web Index Search: Keywords Only Excerpts Only Links Only Power Google www.google.com Welcome to Power Google, By Robert Harris, a practical, how-to book about using Google to locate information on the Internet. Below you will find a brief description of each chapter’s content along with two formats in which they can be viewed (Adobe® or HTML). If you do not have an Adobe® Acrobat® reader or would like to update your current reader to the latest version, click on the Adobe® icon below for a free download.

29 Incredibly Useful Websites You Wish You Knew Earlier There are so many wonderful websites around, and it is difficult to know each and every one of them. The below list provides some of those websites that I find particularly helpful, even though they are not as famous or as prevalent as some of the big names out there. 1. BugMeNot Are you bugged constantly to sign up for websites, even though you do not wish to share your email? If yes, then BugMeNot is for you. The Secret Life of a Food Stamp Jump to navigation  Menu 🔊 Listen

7 Clever Google Tricks Worth Knowing Email Below I have compiled a list of 7 clever Google tricks that I believe everyone should be aware of. Together I think they represent the apex of the grand possibilities associated with Google search manipulation tricks and hacks. Although there are many others out there, these 7 tricks are my all-time favorite. Enjoy yourself. Peyote Lophophora williamsii /loʊˈfɒfərə wɪlˈjæmsiaɪ/ is a small, spineless cactus with psychoactive alkaloids, particularly mescaline.[2] The Spanish common name, also used in English, is peyote[3] (/pəˈjoʊti/; from the Nahuatl word peyōtl [ˈpejoːt͡ɬ]), which means "glisten" or "glistening".[4] [5] Native North Americans are likely to have used peyote, often for spiritual purposes for at least 5,500 years.[6] Peyote is native to southwestern Texas and Mexico. It is found primarily in the Chihuahuan desert and in the states of Coahuila, Nuevo León, Tamaulipas and San Luis Potosi among scrub, especially where there is limestone. Description[edit] Lophophora williamsii with small, red fruit The various species of the genus Lophophora grow low to the ground and they often form groups with numerous, crowded shoots.