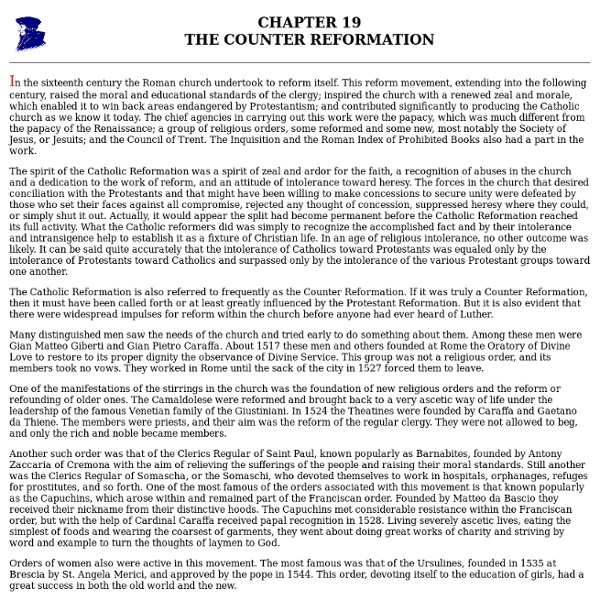 In the sixteenth century the Roman church undertook to reform itself. This reform movement, extending into the following century, raised the moral and educational standards of the clergy; inspired the church with a renewed zeal and morale, which enabled it to win back areas endangered by Protestantism; and contributed significantly to producing the Catholic church as we know it today. The chief agencies in carrying out this work were the papacy, which was much different from the papacy of the Renaissance; a group of religious orders, some reformed and some new, most notably the Society of Jesus, or Jesuits; and the Council of Trent. The Inquisition and the Roman Index of Prohibited Books also had a part in the work. The spirit of the Catholic Reformation was a spirit of zeal and ardor for the faith, a recognition of abuses in the church and a dedication to the work of reform, and an attitude of intolerance toward heresy. Orders of women also were active in this movement.

Reformation timeline Servetus moved to Paris. In previous years he had become a physician; he continued this practice. In one of his writings from his time in Paris is a passage which suggests that blood circulates through the body. "The Dissolution of the Smaller Monasteries" was passed. Cromwell directed the suppression of monasteries. The English "Ten Articles" were adopted. Jan 7: Catherine of Aragon died. Jan 29: Catherine of Aragon buried. Feb: Calvin met Heinrich Bullinger in Basel. Feb: Calvin, using his old pseudonym of Charles d'Espeville, traveled to Italy. Mar: Calvin's first edition of "Institutes of the Christian Religion" was published by Basel printers Thomas Platter and Balthasar Lasius. Spring: Calvin returned to Basel. May 19: The Little Council of Geneva, with the guidance of Farel, asked the people if they wanted "to live according to the new reformation of the faith." May 19: Anne Boleyn beheaded. Jul 12: Erasmus died in Basel. Jul 15: Calvin left France for Strasbourg.

"Rome, the Renaissance and Counter Reformation" EtruscansAncient Rome Medieval Rome RenaissanceBaroqueModern Rome The reaction of Pope Paul III (1534 - 1549, Alessandro Farnese) to the Protestant reform was to summon the council of Trent (1545-1563) and the Counter-Reformation. The most vividly remembered result is the Holy Inquisition which had begun in Spain and which the church extended to other countries. Nevertheless the Reformist movement gained the support of many national states of northern Europe which were keen to challenge the political strength and material wealth of the Roman church. The church employed the newly founded Jesuit order as a tool to stem heresy through moral persuasion and teaching as well as a missionary vehicle aimed at Christianisation of the New World. All in all the Counter Reformation resulted in a more strict and centralised control of the Catholic faith, meaning that many liberties which had developed to that point were tightened up so as to prevent further reformist movements from developing within.

THE REFORMATION AND COUNTER-REFO by James Jackson Background At the beginning of the sixteenth century, the Catholic church, modeled upon the bureaucratic structure of the Holy Roman Empire, had become extremely powerful, but internally corrupt. From early in the twelfth century onward there were calls for reform. Between 1215 and 1545 nine church-councils were held with church reforms as their primary intent. In the first half of the sixteenth century western Europe experienced a wide range of social, artistic, and geo-political changes as the result of a conflict within the Catholic church. In the Roman church a series of powerful popes including Leo X and Paul III responded to reform demands in various ways. The Reformation and Art Protestant reformers rejected the use of visual arts in the church. Martin Luther Martin Luther (1483-1546) while studying law at the University of Erfurt in Germany experiences a spiritual conversion. Luther was summoned to an imperial Diet in Augsburg in 1518. Europe Divided The Visual Arts

Medici: Godfathers of the Renaissance . Renaissance . Counter Reformation Throughout the middle ages the Catholic Church sunk deeper into a pit of scandal and corruption. By the 1520s, Martin Luther's ideas crystallized opposition to the Church, and Christian Europe was torn apart. In response, the Catholic Church set in motion the counter-reformation. During the reign of Pope Leo X, discontent amongst Catholics in Europe was at an all-time high. The challenge from Luther caught the Pope by surprise. In 1545, the leaders of the Catholic Church gathered in the Northern Italian city of Trent for an emergency conference. After 20-years of debate, the Council of Trent established the basis for a Catholic counter-attack. The “Index of Forbidden Books” was published, naming and shaming 583 heretical texts, including most translations of the Bible and the works of Erasmus, Calvin and Luther. A new agency of obedience was created.

Catholic Counter Reformation Catholic Counter Reformation By: muff Events: 14 Editors: view all » Views: 338 dont have one Added: Nov 11, 2008 Modified: Nov 11, 2008 Category: Tags: reformation Related Links: Add this timeline to a list / favorite Embed ShareThis Embed Customize: You can embed this timeline to your blog, website, or other web pages. Change the embed timeline size: Copy the below code and insert to the page you want: This timeline is part of these lists Music and the Counter-Reformation The early decades of the 16th century were fateful ones for the Roman Catholic Church. With the threat of Lutheranism in and , the success of Calvinism in , and the formation of in independent Church of England with King Henry VIII as its head, Catholic officials realized that a reform of their church was timely and necessary. After much delay, the council which aimed at a “cleansing” of the Catholic Church finally met in December, 1545, at , an imperial city beyond the Italian frontier in the . Among the many reforms which resulted from the decrees of the Council of Trent were concerned with the use of music in worship. Although discussions on church music made up only a small portion of the work of the Council of Trent, the fact that it dealt with music at all demonstrates its importance in church life. Another problem addressed by the Council of Trent was the inappropriate manner in which some of the cathedral Canons chanted the Divine Office. Patrick May December 6, 2010

Music of the Renaissance: A Study Guide The purpose of this tutorial is to provide an outline of prominent dates, terms, composers, compositions, social contexts, and ideas that may be encountered in a study of Renaissance era music history. This is by no means a complete list, but it should serve as a solid overview of the time period. For additional information I recommend reading Renaissance Music by Allan W. Atlas. Introduction The Renaissance (1400-1600), a term not coined until the 19th century, was a period of “rebirth” for classical antiquity (Greek and Roman values, especially those expounded by Cicero). Important events leading into the 15th century 1305-1377 was a time when the papacy, whose home base was still in Rome, moved to Avignon. The bubonic plague was rampant between 1347-1389. The 100 Years War raged between France (with Joan of Arc on its side) and England between 1337-1453; the fight was to determine which country owned France. Music of the 15th century general features of English music Humanism

Protestant Reformers Fictitious dispute between leading Protestant reformers (sitting at the left side of the table: Luther, Zwingli, Calvin, Melanchthon, Bugenhagen, and Oecolampadius) and representatives of the Catholic Church, surrounded by important Protestant reformers Protestant Reformers were those theologians, churchmen, and statesmen whose careers, works, and actions brought about the Protestant Reformation of the sixteenth century. Historically speaking, "Protestant" was the name given to those theologians, magnates, and delegations present at the Holy Roman Imperial Diet of Speyer in 1529 who protested the revocation of the suspension, granted at a prior Diet of Speyer in 1526, of Edict of Worms of 1521, which had outlawed Martin Luther and his followers. The meaning of the label "Protestant" widened over time to embrace all Western[clarification needed] Christians as distinguished from the Roman Catholic Church, except for the Anabaptists and other Radical Reformers. Precursors[edit]