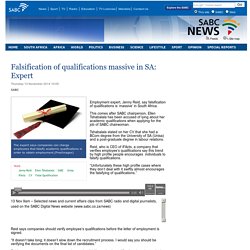 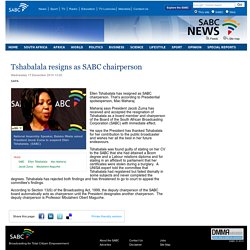 (SABC) Ellen Tshabalala has resigned as SABC chairperson. That’s according to Presidential spokesperson, Mac Maharaj. Maharaj says President Jacob Zuma has received and accepted the resignation of Tshabalala as a board member and chairperson of the Board of the South African Broadcasting Corporation (SABC) with immediate effect. He says the President has thanked Tshabalala for her contribution to the public broadcaster and wishes her all the best in her future endeavours. Tshabalala was found guilty of stating on her CV to the SABC that she had attained a Bcom degree and a Labour relations diploma and for stating in an affidavit to parliament that her certificates were stolen during a burglary. According to Section 13(6) of the Broadcasting Act, 1999, the deputy chairperson of the SABC board automatically acts as chairperson until the President designates another chairperson. 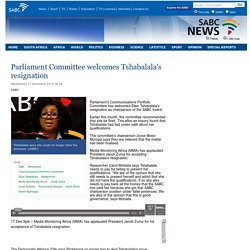 (SABC) Parliament's Communications Portfolio Committee has welcomed Ellen Tshabalala's resignation as chairperson of the SABC board. Earlier this month, the committee recommended that she be fired. This after an inquiry found that Tshabalala had lied under oath about her qualifications. The committee's chairperson Joyce Moloi-Moropa says they are relieved that the matter has been finalised. Media Monitoring Africa (MMA) has applauded President Jacob Zuma for accepting Tshabalala's resignation. Researcher Carol Mohlala says Tshabalala needs to pay for failing to present her qualifications. Pallo Jordan quits politics:Tuesday 12 August 2014. Pallo Jordan remains an intellectual giant:Wednesday 13 August 2014. ANC MP Pallo Jordan resigned from Parliament after reports relating to his qualifications. 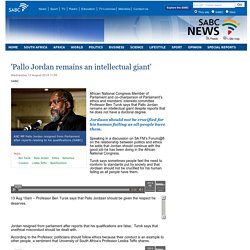 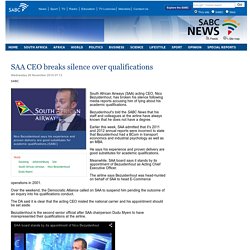 (SABC) South African Airways (SAA) acting CEO, Nico Bezuidenhout, has broken his silence following media reports accusing him of lying about his academic qualifications. Bezuidenhout's told the SABC News that his staff and colleagues at the airline have always known that he does not have a degree. Earlier this week, SAA admitted that it's 2011 and 2012 annual reports were incorrect to state that Bezuidenhout had a BCom in transport economics and industrial psychology as well as an MBA. He says his experience and proven delivery are good substitutes for academic qualifications. 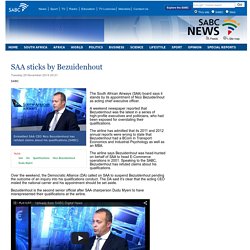 (SABC) The South African Airways (SAA) board says it stands by its appointment of Nico Bezuidenhout as acting chief executive officer. A weekend newspaper reported that Bezuidenhout was the latest in a series of high-profile executives and politicians, who had been exposed for overstating their qualifications. The airline has admitted that its 2011 and 2012 annual reports were wrong to state that Bezuidenhout had a BCom in Transport Economics and Industrial Psychology as well as an MBA.

The airline says Bezuidenhout was head-hunted on behalf of SAA to head E-Commerce operations in 2001. Over the weekend, the Democratic Alliance (DA) called on SAA to suspend Bezuidenhout pending the outcome of an inquiry into his qualifications conduct. Hlaudi Motsoeneng appointed SABC COO:Wednesday 9 July 2014. SABC Chief Operations Officer, Hlaudi Motsoeneng. 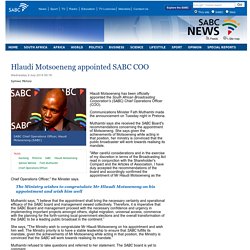 (SABC) Hlaudi Motsoeneng has been officially appointed the South African Broadcasting Corporation's (SABC) Chief Operations Officer (COO). Communications Minister Fath Muthambi made the announcement on Tuesday night in Pretoria. Muthambi says she received the SABC Board's recommendations concerning the appointment of Motsoeneng. She says given the achievements of Motsoeneng while acting in that position, her ministry is convinced that the public broadcaster will work towards realising its mandate. "After careful considerations and in the exercise of my discretion in terms of the Broadcasting Act read in conjunction with the Shareholder's Compact and the Articles of Association, I have duly accepted the recommendations of the board and accordingly confirmed the appointment of Mr Hlaudi Motsoeneng as the Chief Operations Officer," the Minister says.

The Ministry wishes to congratulate Mr Hlaudi Motsoeneng on his appointment and wish him well. Court to hear DA’s plea on SABC COO :Tuesday 19 August 2014. Judgment in DA/Motsoeneng saga reserved:Thursday 18 December 2014. SABC COO, Hlaudi Motsoeneng's lawyers argued that placing him on suspension would be prejudicial to his dignity. 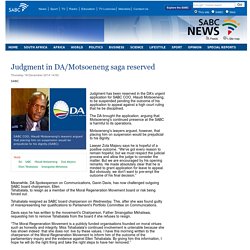 (SABC) Judgment has been reserved in the DA's urgent application for SABC COO, Hlaudi Motsoeneng, to be suspended pending the outcome of his application to appeal against a high court ruling that he be disciplined. The DA brought the application, arguing that Motsoeneng's continued presence at the SABC is harmful to its operations. Motsoeneng's lawyers argued, however, that placing him on suspension would be prejudicial to his dignity. Lawyer Zola Majavu says he is hopeful of a positive outcome. Meanwhile, DA Spokesperson on Communications, Gavin Davis, has now challenged outgoing SABC board chairperson, Ellen Tshabalala, to resign as a member of the Moral Regeneration Movement board or risk being forced out.