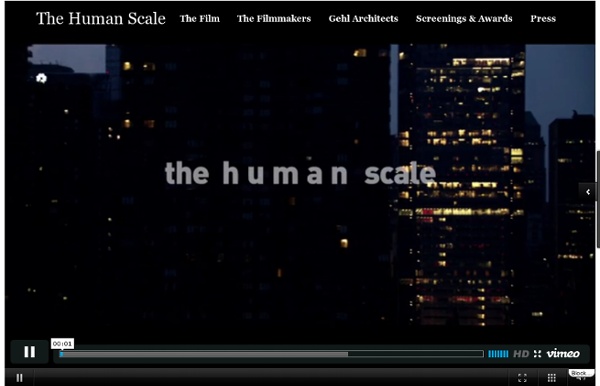 Will Domes Cover Our Future CIties? Best #Cityreads of the Week A round-up of the best stories on cities and urbanism we've come across in the last seven days. Tweet us your favorites with #CityReads. "The Giant Chinese Odor Dome, and Other Sad Ideas for Surviving Our Future Cities," Alex Pasternack, Motherboard Nothing's wrong with a giant dome, in theory. Does a dome contain a problem or keep a problem outside?

2050: What if cities ruled the world? Imagine it is 40 years in the future. Government has been decentralized to the city level. Connections between cities consolidate into mega-corridors, which span national and state borders. This is the time of the mayor, whose political star has risen. 10 Movies That Will Make You Go “Huh?” - Hollywood Gossip 247 : Hollywood Gossip 247 Loading ... When you watch a lot of movies, every once in a while you’ll come across one that baffles you, and the range of reactions to this encounter are pretty fascinating. These types of movies aren’t simply the mindtrip types of movies like Inception or Memento that are labyrinthine in terms of their plot progression but are fairly clear by the end in what they’re about. 1) Primer If you only get a chance to see one time travel movie that was made for under $10,000 in your lifetime, I would strongly urge you to consider making it Primer.

The World’s Most Eco-Friendly Car: It’s Made Entirely From HEMP You would never think that a single plant could solve most of the worlds problems, well it can. Hemp has over 50, 000 uses, why this plant remains illegal is causing confusion among many. Everything from clothes, medicine, fabrics, fuel and more, hemp is definitely a large threat to a variety of corporations that control energy, health and a number of other industries. Many corporations would see a decline in profit if hemp were to be legalized. One in particular this article will focus on is the automobile industry.

The Emerging Future of Cities I travel a lot, and just in the last year I've spent time in some of the worlds wealthiest cities, its poorest, and its most rapidly changing. I also am a constant reader and love to learn new skills in computer science and business strategy. So out of this mix I have some observations and some proposals on how these observations will evolve. Is it an optimistic future? For those who can adapt it will be incredible. Modern Korean Cinema: Revenge Week: THE REVENGE LIST Part of MKC's Revenge Week (July 8-14, 2013). If Revenge Week has achieved anything, it's confirmed beyond any doubt just how prevalent the theme of revenge is in Korean cinema. But exactly how many are there? That's a hard question to answer but here's our shot at a list covering every Korean revenge film we could think of.

Nikola Tesla Secret - Exposing Tesla's "FREE Energy" Device Probably Hundreds (or Thousands) of Dollars per year... Now, what if there was a way to get Unlimited FREE Amounts of Energy whenever you want? And no... Film - Moeder It is said that children inherit their parent’s histories, that the scars of one generation diminished through time become the scars of the next. Director Roma D’Arrietta grew up hearing fragments of her mother Sacha’s tumultuous life. ‘Moeder’ chronicles Sacha’s story, from her beginnings in post war Holland where the effects of the holocaust are still tied to those around her, including her parents. Sacha is an only child, which in her innocence is something of joy as she finds happiness in her small trio. However, the trio begins to fall apart, when she is fourteen her mother commits suicide. Loss reverberates throughout the rest of Sacha’s life as she tries through unconventional means to escape her childhood, but as a result, she finds a depth of feeling that enables her to survive.

How Cities Can Prepare for Rising Sea Levels You’ve heard the latest on climate change, and as is sadly so often the case, it’s even worse than we thought before. On Monday, May 12, researchers announced that the melting of the West Antarctic Ice Sheet “appears unstoppable”. This means that no matter how much green energy we invest in, how many community gardens we plant, how many carbon offsets we buy, we’re still going to lose a significant chunk of this key ice sheet.

Images: Honest Titles for Oscars Nominated Films Each year on the Internet, the Oscar nominations is arousing all sorts of pranks, “honest ones”, to be created on the films which have been selected for the ceremony. Last year, College Humor did a great job creating honest titles for the films, but for the 2014 edition, other websites and Internet users have added their honest touch on American Bluff or The Wolf Of Wall Street. On the social networks, Internet users and websites such as The Shiznit, Hypable or Cracked had fun revisiting film posters with humour and honesty. They even went further than the Oscar nominated films as they included French film Blue Is The Warmest Colour. How Hemp Became Illegal: The Marijuana Link If I told you there was a plant available to us today that could be grown in pretty much any soil, requires no pesticides and it takes very little maintenance to grow, and this magical plant could be used for a very large number of necessities and goods we use today yet we don’t use it, would you think to yourself “Joe you must be high or on some other cheap drug?” Well potential naysayers out there, I’m not high nor do I get high, but let me tell you, there is a plant available right now and it is often mistaken to be marijuana but has capabilities that are beyond what you could imagine. It’s called Hemp. To be clear, even the plant we refer to has Marijuana is actually hemp.

Five Architecture And Urban Planning Trends We Hope To See More Of In 2014 As 2013 comes to a close, we are taking the opportunity to look back on the memorable trends that have influenced the larger dialogue of architecture and urban design. From the beach-side city of Miami slowly transforming into the USA's next design center, to a mushrooming of super-tall skyscrapers competing for the distinction of "world's tallest building," to proposals for entire cities that function on renewable energy and sustainable building practices, 2013 may be remembered best for the proposals by big-named architects seeking to claim attention-grabbing titles over the next couple of years. The upcoming year presents numerous challenges to architects, especially in solving issues of sustainability and climate change, an ever increasing income gap in our largest cities, and planning for the smart growth of cities, especially as the world's population becomes increasingly urbanized. 1. Adapting coastal cities to climate change through resilient design