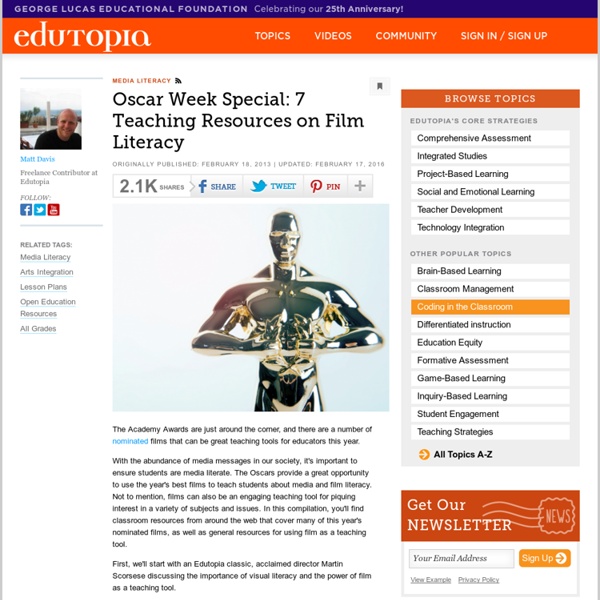 The Academy Awards are just around the corner, and there are a number of nominated films that can be great teaching tools for educators this year. With the abundance of media messages in our society, it's important to ensure students are media literate. The Oscars provide a great opportunity to use the year's best films to teach students about media and film literacy. Not to mention, films can also be an engaging teaching tool for piquing interest in a variety of subjects and issues. First, we'll start with an Edutopia classic, acclaimed director Martin Scorsese discussing the importance of visual literacy and the power of film as a teaching tool. Film Lesson Plans and Interactive Activities: Into Film is a U.K. 8 More Film and Media Literacy Resources for Teachers There are many other great film-literacy lesson plans, how-to articles, and other useful education resources on the web, too many to list.

The Seven Best Silent Short Films for Language Teaching - Kieran Donaghy As many short films are artistic, they have limited appeal in the commercial marketplace and are funded from diverse sources. To make them easier to sell worldwide, they often contain little or no dialogue, which makes comprehension much easier. As a result, they offer intensely ‘filmic’ experiences, using images and movement, sequence and duration, sound and music to tell their stories. These silent films are perfect for the language classroom as they can be used with any level – the teacher just needs to adapt the difficulty of the task to match the level of the students. Your Secret Your Secret is a wonderful short film by Jean-Sebastian Monzani. You can watch the film below and find a full lesson plan here. Your secret from Jean-Sebastien Monzani on Vimeo. Taking Pictures Taking Pictures is a simple but beautiful short animated film by Simon Taylor. Taking Pictures (Animated Short Film) from Simon Taylor on Vimeo. Moments MOMENTOS from Nuno Rocha on Vimeo. A Thousand Words 97% Love Match