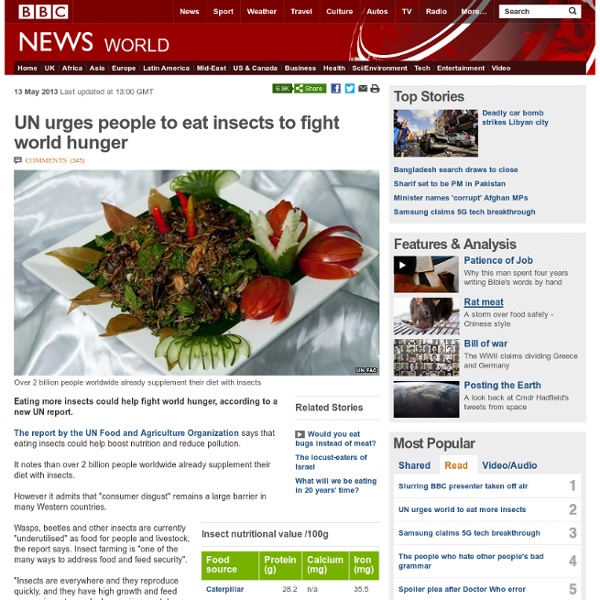 Ento Box: The Elegant Insect Meal Of The Future Though they’re consumed in most of the world, people in the West tend to be a little squeamish about eating bugs. But a new project from a group of design students in England hopes to put edible insects in a more gourmet light. Avant-garde chefs have been trying to introduce insect eating for some time, but these students approached the question not as a gastronomical issue, but rather a design one: How do you make bugs more appealing? This isn’t just some tounge-in-cheek project to get us to rethink our narrow palettes. On the flipside, the protein-rich diet afforded us by those vast, unsustainable herds of animals is a hallmark of the developed world. This isn’t just an exercise, the students worked with a chef and made real recipes out of real bugs. To get all those benefits, they’ve designed the lovely Ento Box, so that instead of chomping down on those grasshoppers pictured above on a plate, we can instead enjoy sustainable protein while not thinking too much about it.

HIGH-INTENSITY CIRCUIT TRAINING USING BODY WEIGHT: Maximum R... : ACSM's Health & Fitness Journal At the Human Performance Institute, Division of Wellness and Prevention, Inc., in Orlando, FL, our clients are high-performing professionals from a variety of industries. These men and women face incessant demands on their time, along with the pressure to perform at high levels and balance their careers and personal lives. From our work with elite performers, we have learned that managing energy is the key to sustaining high performance. However, when facing seemingly infinite demands, one’s ability to manage and expand physical energy can be severely compromised. This can result in persistent fatigue (physical, but also emotional and mental) and a growing level of disengagement with one’s career, family, friends, and personal well-being, which can ultimately lead to performance failure. Traditionally, resistance training often is performed separately from aerobic training — typically on two or three nonconsecutive days each week. Contraindications Exercise Selection Exercise Order 1. 2.

Could This Slick Packaging Convince People To Eat Bugs? Care for grasshopper chips or cricket croquettes? How about mealworm sushi? If you were raised in the West, you’d probably rather eat vomit. Which is a shame, because insects are actually a great source of protein--and they’re healthier and gentler on the environment than commercially raised livestock. Here to convince the squeamish masses that gobbling up creepy-crawlers isn’t the grossest thing on earth are four students in the Innovation Design Engineering Masters program at the Royal College of Art and Imperial College London. That starts with the look of the insects themselves. By “abstracted” he means “ground up the little buggers so they don’t evoke something you’d normally swat with a newspaper.” Then, they got to work packaging the recipes for max shelf appeal. Our goal was to make the brand fit three key characteristics: futuristic, natural, and friendly. Could something like this actually work? We’re in a similar boat today.

Make your own protein snacks at home with this tabletop insect farm Industrial designer Katharina Unger has created a sustainable system that will allow people to add protein to their diet by breeding and harvesting fly larvae at home. The sleek project is called Farm 432, and calls to mind iconic designs like the original iMac — if Jony Ive created insect-harvesting stations, that is. It consists of a large chamber; fly larvae are placed inside a small holding pen at the top. After they transform into flies, they exit the holding pen for the larger chamber where they mate and produce new larvae. Those fall down into a hidden chamber dubbed "kindergarten," where they grow and eventually climb up through a tube — Unger calls the process "self-harvesting" — and then fall into a removable cup. There the larvae can be taken out, cooked, and eaten — with a few choice candidates placed back into the holding pen at the top to start the process again. "When you cook them, they smell a bit like cooked potatoes."

Medicare Provider Charge Data As part of the Obama administration’s work to make our health care system more affordable and accountable, data are being released that summarize the utilization and payments for procedures and services provided to Medicare fee-for service beneficiaries by specific inpatient and outpatient hospitals, physicians, and other suppliers. These data include information for the 100 most common inpatient services, 30 common outpatient services, and all physician and other supplier procedures and services performed on 11 or more Medicare beneficiaries. Providers determine what they will charge for items,services, and procedures provided to patients and these charges are the amount the providers bill for an item, service, or procedure. Please use the navigation bar to the left to view more information on the inpatient, outpatient, and physician and other supplier analyses and to access the data for download. Inquiries regarding this data can be sent to MedicareProviderData@cms.hhs.gov.

Future Food Salon April 18, 2013, Toronto. Family Medical Costs Still Rising The good news is health care costs are going up more slowly. The bad news is that families continue to see larger medical bills. The typical cost to cover a family of four now exceeds $22,000, including the amount paid in insurance premiums and out-of-pocket costs, according to the latest Milliman Medical Index for 2013. Milliman, an actuarial and benefits consultant, puts the cost at slightly less than the amount a family might pay to send a child to an in-state public college for a year. This year’s increase over last was only 6.3 percent, according to the analysis from Milliman, having dropped steadily from the 7.8 increase it calculated for the year-over-year increase in 2010. Milliman calculates that employers pick up the bulk of the costs, paying nearly $13,000 of the overall tab.The employee pays the remaining $9,000, divided between the worker’s share of premiums and that worker’s out-of-pocket costs.

Regular sunscreen use slows skin aging, study shows A new skin study published in the Annals of Internal Medicine confirms what doctors have long preached. Daily, year-round sunscreen use can significantly slow the skin's aging process by as much as 24 percent. (June 3) A new study from Australia provides the strongest evidence yet that regular sunscreen use helps keep skin looking younger. While dermatologists have long believed sunscreen fights wrinkling, the study published Monday in the Annals of Internal Medicine is the first to demonstrate it in a years-long human trial. The study of 903 adults under age 55 found that after 4.5 years, those assigned to slather on sunscreen at least once a day saw 24% less skin aging — at least on the back of their hands — than those left to follow any sunscreen habits they liked. The study does not show sunscreen would have the same effects in people over age 55, whose skin changes more rapidly because of the effects of aging itself. STORY: New sunscreen labels: How to read the fine print

Cut salt, add potassium, live longer, researchers say If people cut their salt intake and increased their intake of potassium by eating more fruits and vegetables, millions of lives around the world could be saved every year, says research out today. These dietary changes would lower people's blood pressure, which would reduce their risk of having a stroke or heart attack, according to the findings published on bmj.com. To take an in-depth look at the topic, British researchers and other experts from around the world analyzed dozens of international studies on salt and potassium and high blood pressure. High blood pressure is defined as a reading greater than or equal to 140/90. STORY: High salt intake linked to high blood pressure in kids STORY: Millions of people don't have their blood pressure under control Among the findings: • A modest reduction in salt intake for four or more weeks lowered systolic pressure (the top number) by an average of 5mm Hg (millimeters of mercury). • Increased potassium intake also helped lower blood pressure.