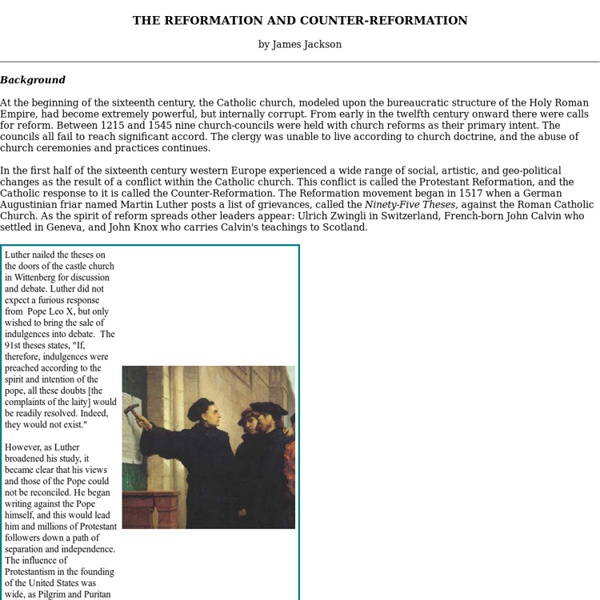 by James Jackson Background At the beginning of the sixteenth century, the Catholic church, modeled upon the bureaucratic structure of the Holy Roman Empire, had become extremely powerful, but internally corrupt. From early in the twelfth century onward there were calls for reform. Between 1215 and 1545 nine church-councils were held with church reforms as their primary intent. In the first half of the sixteenth century western Europe experienced a wide range of social, artistic, and geo-political changes as the result of a conflict within the Catholic church. In the Roman church a series of powerful popes including Leo X and Paul III responded to reform demands in various ways. The Reformation and Art Protestant reformers rejected the use of visual arts in the church. Martin Luther Martin Luther (1483-1546) while studying law at the University of Erfurt in Germany experiences a spiritual conversion. Luther was summoned to an imperial Diet in Augsburg in 1518. Europe Divided The Visual Arts

Music and the Counter Reformation The Council of Trent To respond to the influence of Protestantism with its emphasis on unmediated, individual devotion, the Roman Catholic curia convened the many sessions which together are known as the Council of Trent. In the context of reforming the liturgy, the church laid down precepts governing how music should be conceived and set. I should like, in short, when a Mass is to be sung in church, that its music be framed according to the fundamental subject of the words, in harmonies and rhythms apt to move our affections to religion and piety, and likewise in Psalms, Hymns, and other praises that are offered to God..... In our times they have put all their industry and effort into the composition of fugues, [a technique of imitation] so that while one voice says, "Sanctus" another says "Sabaoth," still another "Gloria Tua" with howling, bellowing and stammering, so that they more nearly resemble cats in January than flowers in May. Index

The Reformation and its Impact - Durham World Heritage Site The Reformation was a decisive moment in English history – one that had a major impact on what it means to be English, even today. How did it affect Durham? The Reformation saw the breaking away of the English Church from the Catholic Church in Rome in 1534 and the installation of King Henry VIII as its Supreme Head. Anne Boleyn, one of the reasons Henry VIII sought to break away from the Church in Rome. © Wikipedia What caused the Reformation? The reformation was a combination of several factors: a century of dissatisfaction with the Catholic Church, whose popes and bishops were demonstrating an increasing abuse of spiritual power for political and material gain; Henry VIII’s desire to obtain a divorce and the Catholic Church’s refusal to grant him one; and the political ambitions of members of Henry’s court. Henry’s Request for Divorce Apart from the ideological reasons for the pope’s refusal, there were political considerations as well. English Autonomy The Dissolution of the Monasteries

Reformed Church Music 1. Introduction The Christian church did not separate theology and music. It is useful to model ourselves on the theological thoughts about music of the early church. It can be useful and instructive to take note of the information available. 2. The vision of Aurelius Augustine (345 - 430) on church music had large impact on the music of the church. - He promoted the singing of praises to God; - Augustine stressed the importance of singing not just with the mouth, but also with the heart and deeds. - The praise in singing is a foretaste of the abundant joy of our prospective live on the new earth. 3. The mathematical approach of the ancient times and Middle Ages was discontinued after the Reformation. Calvin says in his sermon about Psalm 148 that the sun and other created things can not produce any sound by themselves, that we can notice, since they have no understanding of the beauty God laid in them. 4. Until the 16th century music was approached by way of theology.

1500-1600 End of the Renaissance and the Reformation At this point in history there is only one church in the West -- the Catholic Church -- under the leadership of the Pope in Rome. The Church had been for some time a notoriously corrupt institution plagued by internal power struggles (at one point in the late 1300s and 1400s there was a power struggle within the church resulting in not one, but three Popes!), and Popes and Cardinals often lived more like Kings or Emperors than spiritual leaders. Martin Luther, a German priest, began the Protestant Reformation (before we go on, notice that Protestant contains the word "protest" and that reformation contains the word "reform" -- this was an effort, at least at first, to protest against some of the practices of the Catholic Church and to reform the Church). 1. Luther, a very devout man, had experienced a spiritual crisis. 2. 3. Luther attacked one of the most obvious abuses of the time -- the sale of indulgences by the Church. 4. These are some of the outcomes of the Council: 1. 2. 3. 4.

Reformation seen today. THE COUNTER REFORMATION In the sixteenth century the Roman church undertook to reform itself. This reform movement, extending into the following century, raised the moral and educational standards of the clergy; inspired the church with a renewed zeal and morale, which enabled it to win back areas endangered by Protestantism; and contributed significantly to producing the Catholic church as we know it today. The chief agencies in carrying out this work were the papacy, which was much different from the papacy of the Renaissance; a group of religious orders, some reformed and some new, most notably the Society of Jesus, or Jesuits; and the Council of Trent. The Inquisition and the Roman Index of Prohibited Books also had a part in the work. The spirit of the Catholic Reformation was a spirit of zeal and ardor for the faith, a recognition of abuses in the church and a dedication to the work of reform, and an attitude of intolerance toward heresy. Orders of women also were active in this movement.

Reformation timeline Servetus moved to Paris. In previous years he had become a physician; he continued this practice. In one of his writings from his time in Paris is a passage which suggests that blood circulates through the body. "The Dissolution of the Smaller Monasteries" was passed. Cromwell directed the suppression of monasteries. The English "Ten Articles" were adopted. Jan 7: Catherine of Aragon died. Jan 29: Catherine of Aragon buried. Feb: Calvin met Heinrich Bullinger in Basel. Feb: Calvin, using his old pseudonym of Charles d'Espeville, traveled to Italy. Mar: Calvin's first edition of "Institutes of the Christian Religion" was published by Basel printers Thomas Platter and Balthasar Lasius. Spring: Calvin returned to Basel. May 19: The Little Council of Geneva, with the guidance of Farel, asked the people if they wanted "to live according to the new reformation of the faith." May 19: Anne Boleyn beheaded. Jul 12: Erasmus died in Basel. Jul 15: Calvin left France for Strasbourg.

Renaissance Era - Vocal As of July 1, 2013 ThinkQuest has been discontinued. We would like to thank everyone for being a part of the ThinkQuest global community: Students - For your limitless creativity and innovation, which inspires us all. Teachers - For your passion in guiding students on their quest. Partners - For your unwavering support and evangelism. Parents - For supporting the use of technology not only as an instrument of learning, but as a means of creating knowledge. We encourage everyone to continue to “Think, Create and Collaborate,” unleashing the power of technology to teach, share, and inspire. Best wishes, The Oracle Education Foundation