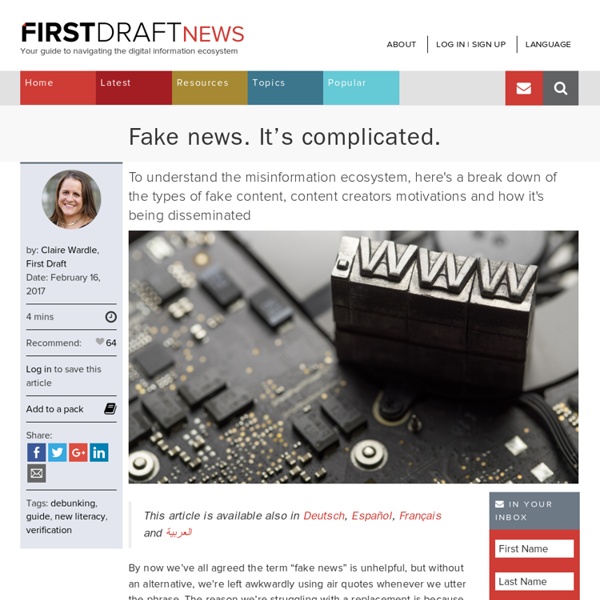 This article is available also in Deutsch, Español, Français and العربية By now we’ve all agreed the term “fake news” is unhelpful, but without an alternative, we’re left awkwardly using air quotes whenever we utter the phrase. The reason we’re struggling with a replacement is because this is about more than news, it’s about the entire information ecosystem. And the term fake doesn’t begin to describe the complexity of the different types of misinformation (the inadvertent sharing of false information) and disinformation (the deliberate creation and sharing of information known to be false). To understand the current information ecosystem, we need to break down three elements: The different types of content that are being created and sharedThe motivations of those who create this contentThe ways this content is being disseminated This matters. This is far more worrying than fake news sites created by profit driven Macedonian teenagers. The Different Types of Mis and Disinformation

The Smell Test: Educators can counter fake news with information literacy. Here’s how. Illustration by Steve Brodner Discerning fact from fiction in news and online content has never been more challenging. From “pizzagate”—false reports of a child sex ring operating in a DC pizza parlor—and creepy clown attacks to retweeted election headlines touting events that never happened, fake news is rampant. Twenty-three percent of Americans say they have shared fabricated reports, knowingly or not, according to a December Pew Research Center report. Librarians have an opportunity to take leadership in the current crisis.

Google’s featured snippets are worse than fake news Peter Shulman, an associate history professor at Case Western Reserve University in Ohio, was lecturing on the reemergence of the Ku Klux Klan in the 1920s when a student asked an odd question: Was President Warren Harding a member of the KKK? Shulman was taken aback. He confessed that he was not aware of that allegation, but that Harding had been in favor of anti-lynching legislation, so it seemed unlikely. But then a second student pulled out his phone and announced that yes, Harding had been a Klan member, and so had four other presidents. It was right there on Google, clearly emphasized inside a box at the top of the page: For most of its history, Google did not answer questions.

If Jeff Sessions Will Not Resign, He Should Be Impeached Article II, Section 4 of the Constitution of the United States announces that “The President, Vice President and all civil Officers of the United States, shall be removed from Office on Impeachment for, and Conviction of, Treason, Bribery, or other high Crimes and Misdemeanors.” The attorney general of the United States is a civil officer. If he has lies under oath to the Senate, that act demands impeachment. After news reports published last Wednesday made it clear that Jefferson Beauregard Sessions III had deceived the Senate regarding his interactions with Russian officials, there were immediate demands that the attorney general recuse himself from investigations into issues relating to those lies and that he resign as the nation’s chief law-enforcement officer. Sessions announced Thursday afternoon that he would recuse himself from any examination of Russian involvement with President Trump’s campaign. Sessions has made his position clear.

What Would Michel Foucault Think of Social Media, Fake News & Our Post Truth World? During the late 70s, Michel Foucault gave a series of lectures at the College de France in which he defined the concept of biopolitics, an idea Rachel Adams calls “political rationality which takes the administration of life and populations as its subject.” These ideas have come to have even more resonance in the spread of biometric identification systems and militarized population control policies. Foucault begins his lecture series on biopolitics with an account of the birth of Neoliberalism, the engineered privatization of public goods and services and the concentration of capital and power into the hands of a few.

How Photos Fuel the Spread of Fake News During a campaign stop in South Carolina last winter, Hillary Clinton stumbled as she climbed the steps of an antebellum mansion in Charleston. Aides helped her regain her balance in a vulnerable but nondescript moment captured by Getty photographer Mark Makela. He didn’t think much of it until August, when the alt-right news site Breitbart touted it as evidence of Clinton’s failing health. “It was really bizarre and dispiriting to see,” he says. “We’re always attuned to photographic manipulation, but what was more sinister in this situation was the misappropriation of a photo.”

The tricks propagandists use to beat science Back in the 1950s, health professionals became concerned that smoking was causing cancer. Then, in 1952, the popular magazine Reader’s Digest published “Cancer by the Carton,” an article about the increasing body of evidence that proved it. The article caused widespread shock and media coverage. Today the health dangers of smoking are clear and unambiguous. And yet smoking bans have been slow to come into force, most having appeared some 40 years or more after the Reader’s Digest article. The reason for this sluggishness is easy to see in hindsight and described in detail by Naomi Oreskes and Erik Conway in their 2010 book Merchants of Doubt.

In age of alternative facts, a scholarly course on calling out crap ired of alternative facts, fake news, and breathless hyperbole, two professors at the University of Washington are trying to strike a blow for science. Their weapon? A new course: “Calling Bullshit In the Age of Big Data.” The class website and colorful syllabus went online last month and almost instantly went viral. article continues after advertisement Fundamentalists hacked my husband to death. The same hate is spreading across the world I have no memory of the attack, but the pictures of my husband’s bloody, motionless body on the street, me next to him pleading for help, the four large stab wounds on my head and a sliced-off thumb, will remind me forever of the hatred and intolerance that changed my life. Our assailants, armed with machetes, were Islamists who on 26 February 2015, ambushed us while we were visiting our homeland, Bangladesh, for a book-signing trip. They hacked my husband, Avijit Roy, to death and left me gravely injured. Why did we deserve such violence?

What the ‘Grievance Studies’ Hoax Means Illustration by Jonathan Barkat for The Chronicle Over the summer, the Wall Street Journal’s Jillian Kay Melchior became suspicious of a bizarre-sounding academic journal article, “Human reactions to rape culture and queer performativity at urban dog parks in Portland, Oregon,” published in the journal Gender, Place & Culture. She started investigating, and discovered that the article’s author, “Helen Wilson,” did not exist. The article was part of an elaborate hoax cooked up by Helen Pluckrose, the editor of the online magazine Areo, James A. Lindsay, a Ph.D. in math, and Peter Boghossian, an assistant professor of philosophy at Portland State University.

What these teens learned about the Internet may shock you! When the AP United States history students at Aragon High School in San Mateo California, scanned the professionally designed pages of www.minimumwage.com, most concluded that it was a solid, unbiased source of facts and analysis. They noted the menu of research reports, graphics and videos, and the “About” page describing the site as a project of a “nonprofit research organization” called the Employment Policies Institute. But then their teacher, Will Colglazier, demonstrated how a couple more exploratory clicks—critically, beyond the site itself—revealed that the Employment Policies Institute is considered by the Center for Media and Democracy to be a front group created by lobbyists for the restaurant and hotel industries. “I have some bright students, and a lot of them felt chagrined that they weren’t able to deduce this,” said Colglazier, who videotaped the episode last January.

"fake news" not new 2 clicks Donald Trump may well be remembered as the president who cried “fake news.” It started after the inauguration, when he used it to discredit stories about the size of the crowd at his inauguration. He hasn’t let up since, labeling any criticism and negative coverage as “fake.”