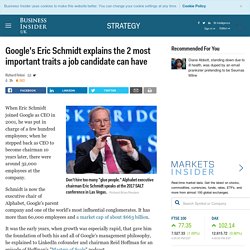 " Alphabet executive chairman Eric Schmidt speaks at the 2017 SALT conference in Las Vegas. Richard Brian/Reuters When Eric Schmidt joined Google as CEO in 2001, he was put in charge of a few hundred employees; when he stepped back as CEO to become chairman 10 years later, there were around 32,000 employees at the company. Five New Rules My Company Set After A Hiring Disaster. Early in 2014, my year-old company faced a critical launch deadline. 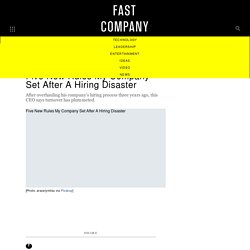 Feeling pressured and anxious, I started hiring in a hurry. To make a long story short, it didn’t go well. I soon realized we’d wound up with some real misfits. Tips on How to Hire for Entrepreneurs. The Entrepreneur Insiders network is an online community where the most thoughtful and influential people in America’s startup scene contribute answers to timely questions about entrepreneurship and careers. 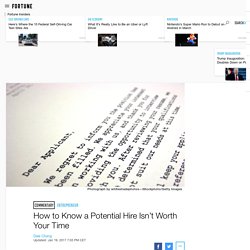 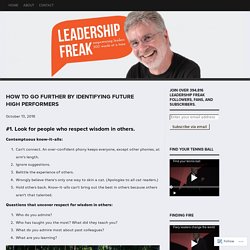 Look for people who respect wisdom in others. This Company Retains 95% of Its Employees — Here’s Its Secret. The last 10 years of Joel Grossman’s life started with a seemingly casual introduction through a business school friend to Location Labs CEO Tasso Roumeliotis. 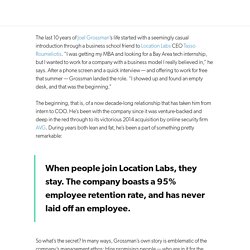 “I was getting my MBA and looking for a Bay Area tech internship, but I wanted to work for a company with a business model I really believed in,” he says. After a phone screen and a quick interview — and offering to work for free that summer — Grossman landed the role. Unexpected Ways to Find Good People. Good news emerged on the U.S. jobs front in July with a reported 5.8 million job openings - more than any time since the peak year of 2000. 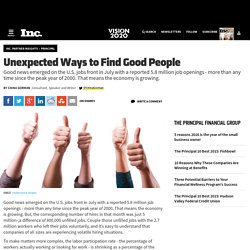 That means the economy is growing. But, the corresponding number of hires in that month was just 5 million-;a difference of 800,000 unfilled jobs. Couple those unfilled jobs with the 2.7 million workers who left their jobs voluntarily, and it’s easy to understand that companies of all sizes are experiencing volatile hiring situations. Building High Performance Teams Takes More Than Talent. The Exact Hiring Formula That Will Help You Find The Right People.

5 Tips to Improve the Candidate Experience. The Cost of Maximizing Quality of Hire Is Free. At a recent sales manager training program on how to conduct a Performance-based Interview, the conversation quickly turned to how to measure and maximize quality of hire. 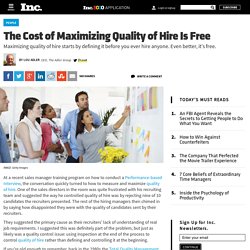 One of the sales directors in the room was quite frustrated with his recruiting team and suggested the way he controlled quality of hire was by rejecting nine of 10 candidates the recruiters presented. The rest of the hiring managers then chimed in by saying how disappointed they were with the quality of candidates sent by their recruiters.

They suggested the primary cause as their recruiters' lack of understanding of real job requirements. I suggested this was definitely part of the problem, but just as likely was a quality control issue: using inspection at the end of the process to control quality of hire rather than defining and controlling it at the beginning. If you're old enough to remember, back in the 1980s the Total Quality Management initiative became a global groundswell. Why Recruiting Isn't Over When an Employee Accepts Your Offer. Recruiting. 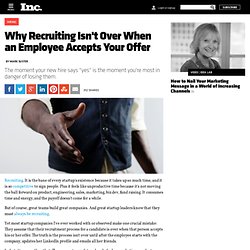 It is the bane of every startup's existence because it takes up so much time, and it is so competitive to sign people. Plus it feels like unproductive time because it's not moving the ball forward on product, engineering, sales, marketing, biz dev, fund raising. It consumes time and energy, and the payoff doesn't come for a while. But of course, great teams build great companies. How to Hire the Right Candidate. Accommodating-untraditional-talent. Untraditional thinkers--the type of talent who can challenge norms and frame big-picture challenges--are usually hard to find through conventional recruiting approaches. 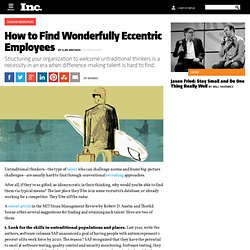 After all, if they're so gifted, so idiosyncratic in their thinking, why would you be able to find them via typical means? The last place they'll be is in some recruiter's database, or already working for a competitor. They'll be off the radar. A recent article in the MIT Sloan Management Review by Robert D. Austin and Thorkil Sonne offers several suggestions for finding and retaining such talent.

6-selling-secrets-that-will-help-you-hire-stronger-people. Just as for any sales process, there's a similar funnel for recruiting: moving potential prospects and candidates from first contact, through the recruiting and assessment process, and ultimately into great hires. 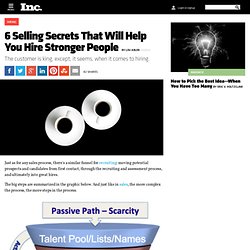 The big steps are summarized in the graphic below. Engage New Talent Before You Hire. Many organizations view the hiring process as transactional: the position needs to be filled and the candidate needs a job. However, this perspective creates missed opportunities to engage new team members before they even step through the door to begin training. At Disney Institute, we believe that one of the best ways to engage new talent is through the recruitment and selection process. By intentionally and deeply immersing candidates in the culture at all key points in the process, we can test for a good cultural match. The candidate then has the ability to select in or select out of the established culture. Why Smart People Don't Get Hired.