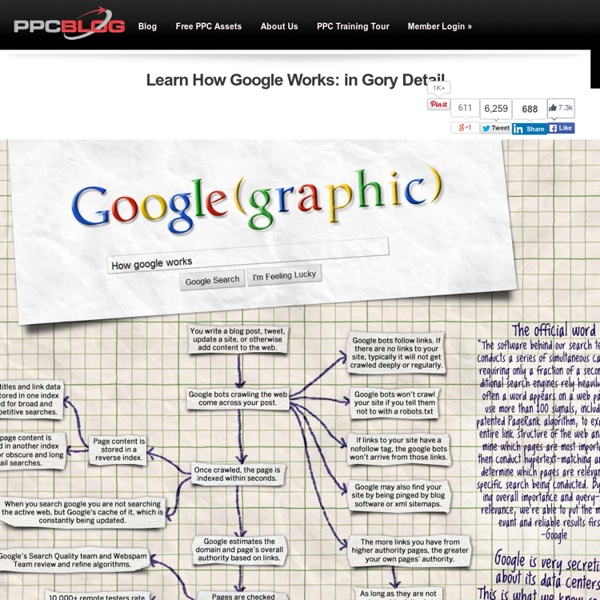 Google & Books: An Exchange by Edward Mendelson, Paul N. Courant, and Ann Kjellberg In response to: Google & the Future of Books from the February 12, 2009 issue To the Editors: My colleague and friend Robert Darnton is a marvelous historian and an elegant writer. 40 Google+ Tips and Tricks for Power Users July 27, 2011, 8:24 AM — Google+ is all the rage right now. Even under its limited-invite "field trial" phase, the social sharing service is growing in leaps and bounds, with oodles of new users joining every day and even more champing at the bit to get in. Most of us, however, are only beginning to scratch the surface of what Google+ can do; like many Google products, G+ is brimming with advanced features and untapped tweaks. That's why I decided to put together this massive list of Google+ tips and tricks.

Game From Scratch C++ Edition! Want to create a game using C++ and SFML? This is the perfect place to start! This tutorial series will follow the creation of a simple game in C++ from the very beginning till the end, a micro-version of the overall purpose of this site. C++ is an evolving language standard and a great many tutorials out there are horrifically outdated or just plain bad. Google Hacking Database, GHDB, Google Dorks We call them 'googledorks': Inept or foolish people as revealed by Google. Whatever you call these fools, you've found the center of the Google Hacking Universe! Latest Google Hacking Entries Google Hacking Database Categories 64 Things Every Geek Should Know « Caintech.co.uk If you consider yourself a geek, or aspire to the honor of geekhood, here’s an essential checklist of must-have geek skills. The term ‘geek’, once used to label a circus freak, has morphed in meaning over the years. What was once an unusual profession transferred into a word indicating social awkwardness.

10 research tips for finding online answers Before Danielle Thomson was our TED Prize researcher, she wrote trivia for Who Wants to Be a Millionaire? and spent years finding difficult-to-source info for The Late Show with David Letterman. And she has quickly established herself as our staff secret weapon. When one of us can’t get our hands on a piece of information that we need, we turn to Danielle and — voila! — there it is. We asked Danielle to share some of her best research tips to help you in those “why can’t I find this?”

Google Dorks cache: If you include other words in the query, Google will highlight those words within the cached document. For instance, [cache:www.google.com web] will show the cached content with the word “web” highlighted. This functionality is also accessible by clicking on the “Cached” link on Google’s main results page. The query [cache:] will show the version of the web page that Google has in its cache. The 10 Best Android Apps that Make Rooting Your Phone Worth the Hassle (promoting self from Gizmodo) Yo. I'm with you. Same phone. Same situation. 7 Clever Google Tricks Worth Knowing Email Below I have compiled a list of 7 clever Google tricks that I believe everyone should be aware of. Together I think they represent the apex of the grand possibilities associated with Google search manipulation tricks and hacks. Although there are many others out there, these 7 tricks are my all-time favorite. Enjoy yourself.

Chat with Your Friends through ms dos Command Prompt - StumbleUpon -: Chat with Friends through ms dos Command Prompt :- 1) All you need is your friend's IP Address and your Command Prompt. 2) Open Notepad and write this code as it is.....! @echo off :A Cls echo MESSENGER set /p n=User: set /p m=Message: net send %n% %m% Pause Goto A 3) Now save this as "Messenger.Bat". [Infographic] Google's 200 Ranking Factors There’s no doubt that Google’s algorithm is more complex — and volatile — than ever. The days where SEO was all about meta tags and backlinks is long gone. Google now uses at least 200 ranking factors in their algorithm, including social signals, user-interaction signals, and trust.

How to use Google for Hacking. Google serves almost 80 percent of all search queries on the Internet, proving itself as the most popular search engine. However Google makes it possible to reach not only the publicly available information resources, but also gives access to some of the most confidential information that should never have been revealed. In this post I will show how to use Google for exploiting security vulnerabilities within websites. The following are some of the hacks that can be accomplished using Google. 1.