The Trump Resistance Plan: A Timeline – Russia and President Trump 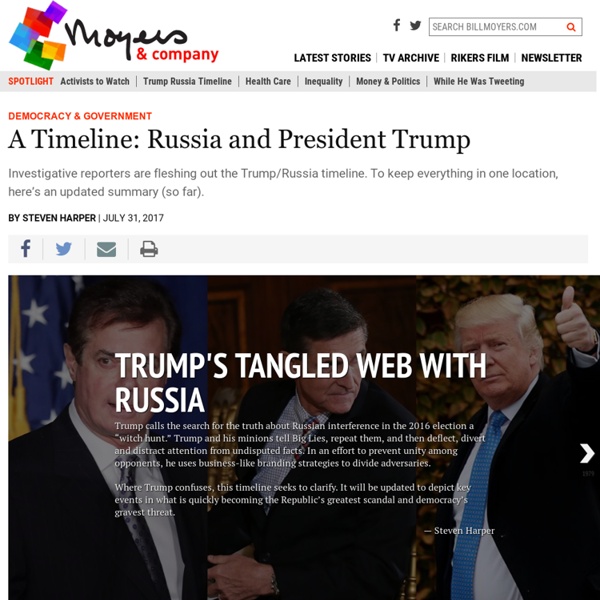 Of the Jan. 6, 2017, meeting, when Comey told Trump about the infamous Steele dossier, Trump said: “He shared it so that I would think he had it out there” as leverage against Trump. Of the Feb. 14, 2017, meeting, when Trump said he hoped Comey could see his way to “letting Flynn go,” Trump said: “He said I said ‘hope’ — ‘I hope you can treat Flynn good’ or something like that. I didn’t say anything. But even if he did — like I said at the news conference on the, you know, Rose Garden — even if I did, that’s not — other people go a step further. I could have ended that whole thing just by saying — they say it can’t be obstruction because you can say: ‘It’s ended. It’s over. “Did you shoo other people out of the room when you talked to Comey?” “No, no,” Trump answers. “Did you actually have a one-on-one with Comey then?” “Not much,” Trump says.

Related:  Websites useful or fun • Useful information • Politics • All your base are - Various + Solutions or Need One

9 of the Strangest and Loveliest Dioramas Ever While there are endless different kinds of dioramas, there is something that most all of them have in common: the strange beauty that comes from capturing our world in miniature, in exacting detail. Some of the most impressive examples of this craft are on display in museums around the globe, while others a bit more off the beaten path. From bizarre to beautiful, here are nine places to see these intricate three-dimensional snapshots of the world. Key findings about U.S. immigrants The U.S. has more immigrants than any other country in the world. Today, more than 40 million people living in the U.S. were born in another country, accounting for about one-fifth of the world’s migrants in 2015. The population of immigrants is also very diverse, with just about every country in the world represented among U.S. immigrants.

Sally Yates walked out of an Aaron Sorkin script and into liberals’ hearts. Jim Bourg/Reuters Shortly before midnight on Monday, I texted a friend in Los Angeles. “Hey, do most people know who Sally Yates is?” I asked him. Don't Be Fooled: 'Generation Wealth' Is More About Wanting Than Having Jackie and friends with Versace handbags at a private opening at the Versace store, Beverly Hills, California, 2007. Lauren Greenfield/INSTITUTE hide caption toggle caption Lauren Greenfield/INSTITUTE Stephen Colbert’s Joyful Return to Political Comedy During this election cycle, it has often felt as though the country’s politically inclined late-night talk-show hosts have been sitting in the wrong chairs, or else sadly absent altogether. Sure, John Oliver is in the right spot, hectoring gleefully at HBO. But Samantha Bee, who is doing a superhero's work just once a week on TBS, really ought to be killing it nightly as the host of “The Daily Show.”

You're not going to believe what I'm about to tell you Comics Blog Books Shop Comics: Random Most Popular All Cats Grammar Food Animals Tech This is a comic about the backfire effect. Some States Spend Billions on Economic Tax Incentives for Little or No Return By one estimate, state and local governments spend at least $45 billion a year on tax breaks and other incentives to lure or keep job-producing businesses and plants in their jurisdictions. New York, for example, plows billions of dollars into the Empire State Development Corp. and Democratic Gov. Andrew Cuomo’s signature Start-Up NY program. For more than three decades, Florida has offered an array of tax incentives to businesses that locate, invest, and hire in the state’s distressed areas through an initiative called the Enterprise Zone Program.

Gallery: An intriguing sci-fi vision of a megacity Olalekan Jeyifous may have trained as an architect, but these days, the Nigerian-born, Brooklyn-based artist is much more interested in sparking debate with his conceptual drawings and sculptures. Starting conversation is at the center of his Improvised Shanty-Megastructures series, a speculative, forward-facing vision of Lagos, Nigeria, one of the world’s largest cities (with an estimated population of some 21 million). His images, which he creates through a process similar to architectural renderings, juxtapose sprawling shanty-town megastructures with shiny luxury developments.

The strange case of Fox News, Trump and the death of young Democrat Seth Rich In the early hours of Sunday 10 July 2016, Seth Rich, a 27-year-old digital campaigner with the Democratic National Committee, was walking home after a long night at his favorite Washington sports bar, Lou’s City. He was in no hurry, chatting for more than two hours on the phone to his girlfriend. At 4.19am, he told her he was almost at his door and had to go. Seconds later, gunshots rang out.