In China, the true cost of Britain's clean, green wind power experiment: Pollution on a disastrous scale - By SIMON PARRY in China and ED DOUGLAS in Scotland The lake of toxic waste at Baotou, China, which as been dumped by the rare earth processing plants in the background On the outskirts of one of China’s most polluted cities, an old farmer stares despairingly out across an immense lake of bubbling toxic waste covered in black dust. 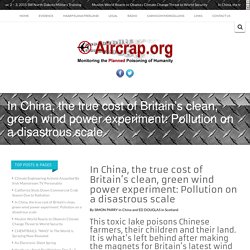 He remembers it as fields of wheat and corn. Yan Man Jia Hong is a dedicated Communist. At 74, he still believes in his revolutionary heroes, but he despises the young local officials and entrepreneurs who have let this happen. ‘Chairman Mao was a hero and saved us,’ he says. Vast fortunes are being amassed here in Inner Mongolia; the region has more than 90 per cent of the world’s legal reserves of rare earth metals, and specifically neodymium, the element needed to make the magnets in the most striking of green energy producers, wind turbines. 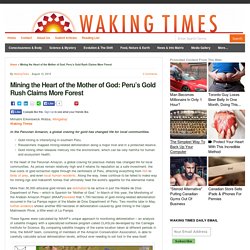 Gold mining is intensifying in southern Peru.Researchers mapped mining-related deforestation along a major river and in a protected reserve.Gold mining often releases mercury into the environment, which can be very harmful for human and ecosystem health. In the heart of the Peruvian Amazon, a global craving for precious metals has changed life for local communities. As prices remain relatively high and it retains its reputation as a safe investment, the true costs of gold extraction ripple through the rainforests of Peru, affecting everything from fish to birds of prey, and even local human residents. Along the way, trees continue to be felled to make way for mining rigs and makeshift homes that ultimately feed the world’s appetite for the elemental metal. Scientists Create ‘Smog-Eating’ Concrete That Could Cut Pollution By 42%!

Dutch scientists have successfully tested a smog-eating concrete that can cut certain kinds of air pollution by as much as 45%. 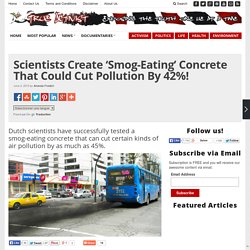 Could the answer to pollution be right underneath our feet? While it may not be that simple, a recently designed technology that ‘eats’ up smog definitely looks promising! As shared by LA Times, Dutch scientists have successfully tested a smog-eating concrete that can cut certain kinds of air pollution by as much as 45%. When a key air pollutant, nitrogen oxides (NOx), are emitted from cars’ exhaust pipes and mixed with titanium oxide, a chemical reaction occurs when hit with sunlight, that turns the toxic gas into a harmless powder. 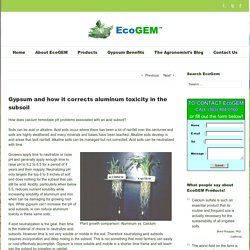 Soils can be acid or alkaline. Acid soils occur where there has been a lot of rainfall over the centuries and soils are highly weathered and many minerals and bases have been leached. Alkaline soils develop in arid areas that lack rainfall. Alkaline soils can be managed but not corrected. Plant growth comparison: Aluminum vs. Growers apply lime to neutralize or raise pH and generally apply enough lime to raise pH to 6.2 to 6.5 for a period of 4 years and then reapply. If acid neutralization is the goal, then lime is the material of choice to neutralize acid subsoils. In acid subsoils, soluble aluminum is toxic to plant roots and causes root pruning. Global Aluminum Toxicity in Soil Gypsum is calcium sulfate and lime is calcium carbonate. Dr. The Quicksilver Demon: Rogue Gold-Mining is the World's Largest Source of Mercury Pollution. 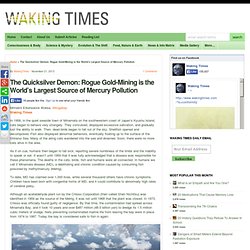 They convulsed, displayed excessive salivation, and gradually lost the ability to walk. Then, dead birds began to fall out of the sky. Shellfish opened and decomposed. Fish also displayed abnormal behaviors, eventually floating up to the surface of the Shiranui Sea. As if on cue, humans then began to fall sick, reporting severe numbness of the limbs and the inability to speak or eat.

To date, MD has claimed over 1,000 lives, while several thousand others have chronic symptoms. Although an acetaldehyde plant run by the Chisso Corporation (then called Shen Nichitsu) was identified in 1959 as the source of the MeHg, it was not until 1968 that the plant was closed. Illegal gold mine established in 2009 in the department of Madre de Dios.